The highly anticipated New York City restaurant guides are out now. A story about his by Garth Johnston of the gothamist not only drew my attention, but made me put on my thinking cap too. Google’s movements into travel, the changing framework of online travel, and the real value of credability seem to be boiling to the surface of the  online business soup. Zagat, the online restaurant guides slash data company, offers interesting value.

The ITA fiasco and subsequent acquisition by Google, Hotel Finder, Flight Search, Motorola, Google Wallet, and Zagat – if there ever were an equation of takeover movement, this is it. But then, that is no rocket science, the tools are one thing, the methodology another. When I first had the notion Google would take over online travel by virtue of their leverage, it seemed logical the company would just “put the squeeze” on Orbitz, Expedia, Kayak, Bing, and a host of others. The big problem there, first being the unwanted magnifying glass of anti-trust scrutiny.

Then Google’s brilliance truly shined. Really. Let me explain here before spotlighting what Garth Johnston (a former Zagat insider by his own admission) effectively labeled “highly credible” with; “…reviews are exactly what they appear to be. And they can help you find good food.” What could be more meaningful than a tasty experience on the other end of a review? Let’s talk strategy turkey first. 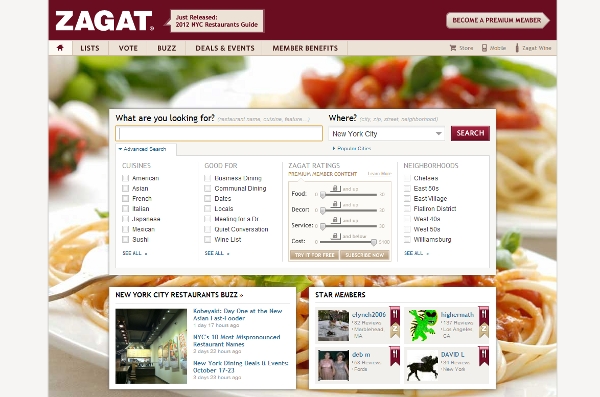 Alice & Google Through the Looking Glass

Here’s the thought process. Is Google  best served by just “ramping up” the online travel game, rather than taking it over completely? Put very simply, Google is perfectly situated to provide highly economical transactions and a better monetization model. Plus, it is highly likely that Google bought ITA rather than build the same technology for one reason only – to avoid the “monopoly stench” that would follow a loss in the courts. Our friends at Google are brilliant at more than writing code.

Look at it this way, if Google pushes too far via “buying” technology the loss is just a loss. On the other hand, losing in court over an “in house” Google element! You see the distinction. Motorola, Google Wallet, what is it you do with smart phones + restaurants? Now back to Zagat, another tool in the Google monetization tool box, and a good one, for more reasons than you might think.

Nowadays people do not have so much time to worry about things like trust, real value, the best hotel, the nicest foodie value, the best price, or do they? Online travel dealers have about milked the end provider dry where commissions and charging for some bookings are concerned. Look at American Airlines, and just today Enterprise pulling the plug on Orbitz over what they call “excessive commissions” – the bottom line is – the margins are gone. OTA’s have mashed the last drop of grape juice, it’s over. And another big reason is trust.

Sure, many people don’t care whether or not TripAdvisor reviews are fake or real, who cared about a stranger’s opinion anyway, after all? The little owl and the binoculars got us – WOW! 5 whatchamakawlits! Beats the heck out of 4, right? But, here’s the real BUT of this situation – what about those who do care? Usually, the people who look for great restaurants on sites like Zagat, hotels via the hotel sites and Google, and “insurance” of any credibility – these are not Internet junkies, but they use the Internet and their smart devices. Maybe there will always be room for searching the quick review and deciding, base on? But not for everyone.

When the Only Way Up Is Wide

Now let’s factor in growth, the whole ball of online moneymaking wax. Google does not want to take over and exclude other players, they want the to eat the cake too. Kayak, Expedia, Michelin, the airlines, everyone plays a bit harder and still pays Google. Meanwhile, alternative choice(s) monetize Google from the other end.

Free hotel search, airline search, Zagat and other services (look for rental cars next) – filtered through the very effective Google funnel – optimized into a new Google Wallet function onto a Motorola Droid Bionic or Razor smart device – the loop is complete. Google, in case you are still obtuse, has re-created the Ronald McDonald “cradle to grave marketing” schema – only better.

Toss in some nifty Zagat statistics (PDF) , share the liabilities of the market with other OTA’s and service providers, continue getting ad revenue – the best model for Google growth is sideways folks. Of course, I may be wrong, but it seems to me the circle of Google’s initial influences online is about complete. Why is Zagat my “defining” Google Travel buy? Wired called it; The Reinvention of the Mobile Search Engine. I call it; The Reinvention of reserving a spot anywhere on the globe.

For the doubting Thomas out there, I leave you with Motorola’s latest, the Droid Razor – Wow.

Can Airbnb Continue to Expand as Before?
Hopper Taps Into Hostaway Client Base in Lastest Strategy Move
AI-Powered Pathfndr Announces a Slew of New Features
“Wheel the World” Hurdles Travel Barriers for Travelers Using Tech
Previous: Time for Riga to Shine: Staro Rīgā 2011
Next: Easter Island: The Essential Guide