By making it more difficult for America’s potential clients to compare prices with competitors, the 3rd largest US airline risks a great deal. Expedia and others claim their new model is “anti-consumer and anti-choice,” and gives the consumer limited choices. There is merit to this argument obviously, as forcing American Airlines clients to book on their own site, or those of “selected” affiliates does close the consumer window of choice substantially. 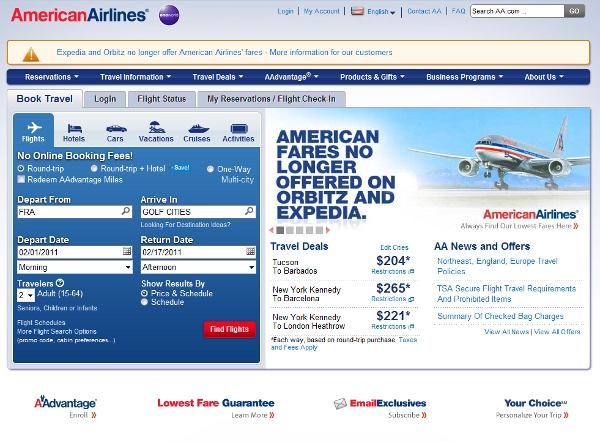 But American Airlines doesn’t expect a “significant” drop in sales because of Expedia’s move. According to their spokesman, Ryan Mikolasik, he suggested that the moves just drive consumers to the AA site to book instead. Our report earlier went a ways toward disproving this, revealing an upward trend after Christmas for all airlines.

It is clear that a little war between companies like Expedia and some airlines is brewing. As AA and other carriers rush to cut costs and stay afloat during these tough economic times, cutting out the so called “middle man” will make sense more an more. What AA and the others may not have considered is just how much it costs Expedia and the others to sell airline inventory. 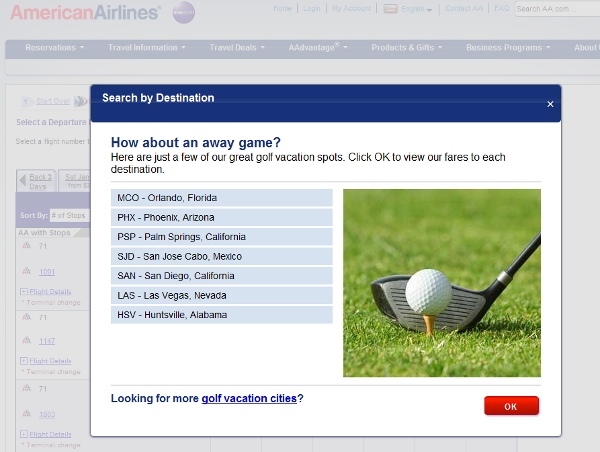 A suggestion should be good don't you think?

We know for a fact Expedia spend upwards of $7 million a month in Adwords marketing money alone. Is American willing to fork this over, and more importantly, can they be as effective online as Expedia and Orbitz? A redesign release of AA dot com probably reveals as much about the airline’s intent (and shaky PR) as any announcement of late. If you watch the video supplied by AA at this “innovation’s” release, it is clear the company wants to convince passengers of their “equality” with Epedia and others. Let’s take this video apart by the numbers with someone who has beta tested thousands of such sites.

Why take the opportunity to slash away at American’s latest digital footfall? Because it is our business not only to inform the traveler, but to help them. Expecting, or believing, American Airlines is redesigning the wheel for you the customer? This is nonsense. What has been done is a mediocre effort in order to accommodate dumping AA’s online affiliates. A half hearted effort to “patch” a system that when all is said and done has not made higher margins for the airline. AA has already chopped jobs and just about everything else to stay afloat, now they expect you to believe going digital will help you. Well, it may help you buy tickets on American Airlines – but for the package deal or best vacation?

American Airlines can still afford great commercial outreach, marketing, advertising, website tweaks – they even offer weather alerts when they “broadcast” to their 100,000 fans on Facebook. The point is they broadcast. A big plus for the airline is their actual engagement on Twitter though. At least they do talk with customers there. But an iPhone App that professes to KNOW who you are literally? What should anyone think of a company that claims such things?

At American Airlines, they know why you fly. The problem is, they don’t think you are very smart. It’s about sales, and economy ones at that. You don’t get Rolex service at Walmart do you? Could it be AA just cannot afford to pay the middle men any more, and they want to appear to operate from a position of strength for the stockholders?