Has Travelocity’s Gnome Gone Too Far This Time?

A new Travelocity campaign to spur travelers to action calls to question just how agressively companies should purue new business given the current economic situation. The launch of Travelocity’s Roaming Gnome Blitzkrieg on tourists stuck on the couch with “Go & Smell the Roses” – may just fly in the face of good PR. 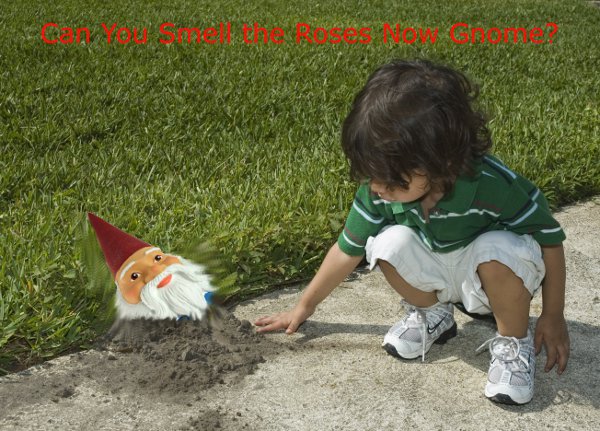 According to the PRNewswire release, Chief Marketing Officer for Travelocity America Bradley Wilson offered this:

“‘Go & Smell the Roses’ is more than a tagline in an advertising campaign, it’s a rally cry. With this new campaign we are using our most powerful asset, the iconic Roaming Gnome, to inspire and instigate people to get off the couch, to go and smell the roses.”

Five TV commercial spots that try and pry consumer butts from their much used living room furniture, they may end up being a battle cry indeed. For many Americans the smell of roses has been replaced with another smell. And Travelocity’s no holds barred hard sell of places and events like; Pamplona, Spain; the Holi Festival in India; and the sandy beaches of the world – well, it just probably is too much to be considered considerate at all. Still, the US economy looks to be on the rise, maybe the Travelocity move is just in the nick of time? It matters not, I still hate the Gnome.

Sure there are probably some people with enough money to head off to see the running of the bulls in Spain, but for the larger segment who are reduced to watching such things on TV, Travelocity’s Gnome will just be insensitive is all. Let us know your views on this one. Does the Traveling Gnome irk you?

“Wheel the World” Hurdles Travel Barriers for Travelers Using Tech
Lend Me Your iPhone to Test the “Backdrop App” Game Changer
Game-changing AI-powered Travel Innovations
VR Travel Experiences that Shape the Future
Previous: Greece Still Has It: More Amanzoe Grandeur, That Is
Next: Localeur – The Latest Shot At Nearby Travel Recommendations