Winning Hacks via the initiative of THack THack initiative brings forth fruit.

Winning Hacks via the initiative of THack

Travel Technology Europe showcases the best in travel tech so far this year, but the big surprise is Tnooz’s THack initiative. Arophilia talks with Tnooz Co-founder Kevin May about what is in store for 2011.

The Travel Technology Europe show in London offered up many new an innovative products and services for consumers this week. Argophilia Travel News had the opportunity to speak with one of the key sponsors of this event, and maybe travel technology’s greatest evangelist, Kevin May, Co-founder of Tnooz. But first, some great innovations travelers can anticipate seeing soon.

Winning Hacks via the initiative of THack

The creator’s video below tells the tale better than 1000 words.

THack’s second, or Silver Prize, went to James Addison of Skyscanner for his a little hack called, Advent. Advent is an ad serving system using Expedia and Everbread API’s for flight comparisons within ad units. Again, the developer shows it off best in the video below.

Last (or third) but certainly not least, THack gave James Dunford Wood and Alastair James of World Reviewer the Bronze medal for their creativity that combed a great many API’s from Expedia and others – they dubbed their hack Spin, which is basically a mashup of flight search, tours, and rich content from some critical data players.

I would also like to introduce the reader to World Reviewer (terrible brand), one of the most striking visual travel websites I have ever seen, just in case you never saw it. The landing below offers up wonderful image-centric aesthetics and a crisp UI, to go with their seemingly winning premise. Check them out. 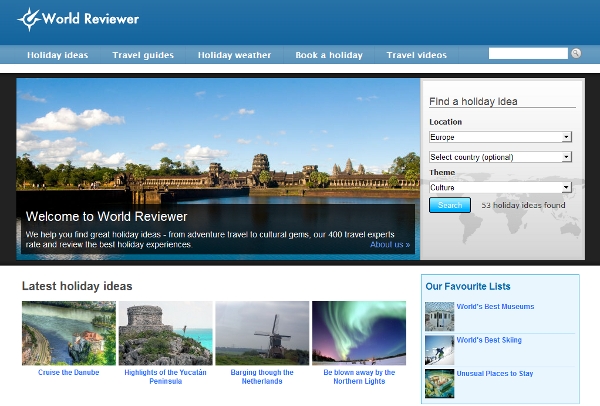 The superb aesthetics of World Reviewer's landing and other pages

We spoke with Tnooz Co-Founder and travel tech visionary Kevin May today about THack, and a bit about the future of travel technology. The gist of that interview is as follows:

Phil Butler – Can you envision a new travel platform utilizing the hacks of the three winners here Kevin?

Kevin May – Hack events are often about collaboration and sharing of ideas – a process which was fascinating to see over the course of the ten days. I suspect many of the hacks will be taken to other levels or integrated elsewhere.

Phil Butler – Bronze winners, James Dunford Wood and Alastair James at Worldreviewer, in my view, seem to have created the more powerful hack here. What are your thoughts?

Kevin May – I’m not going to argue with the judging panel’s decision here. The six hacks presented have great potential, each in their own way. With a bit of work, possible partnerships are possible on the commercial side of things.

Phil Butler – Is there a hack in the clouds that you did not see at the Thack event, which you would like to?

Kevin May – There is huge potential in the social and local deals space at the moment. I suspect there is something interesting to be had in creating a mobile-led, deal finder which allows people within a person’s network to view and arrange payment. The service would also allow point-to-point travel search, including air, taxi, rail, plus the accommodation.

The travel technology sphere, is not the only realm that will benefit from these travel technology innovations – this should be obvious. But as Kevin suggested, there is a bit of anticipation about that next cutting edge combination – the one that will help leverage the next travel giant to an advantage. This “edge” will, in my view, be a combination – an integration – of very powerful mobile and search/suggestion capability – combined with superb mobile integration of course. The gold ring, so to speak, is just as Kevin suggested up there. You can bookmark that.

Thanks to Kevin for taking the time, and more importantly for instigating creativity. And for the winners of THack London? You are going places, I’ll stake my super star tech writer status on it.

Can Airbnb Continue to Expand as Before?
Hopper Taps Into Hostaway Client Base in Lastest Strategy Move
AI-Powered Pathfndr Announces a Slew of New Features
“Wheel the World” Hurdles Travel Barriers for Travelers Using Tech
Previous: Yerevan Is the 2012 World Book Capital
Next: Lakestar Media Toting SEO for Journeys of Distinction