Can Swipp Whip Facebook and Swipp Market Intel Into Shape?

The coming automatic, freaky, contextual world and why we’re writing a book about it…

When you get to be as famous a geek as Robert Scoble, and when you get your picture made alongside Google’s Sergey Brin, then you can get by with shameless self promotion and a lot else.

For the rest of us though, proclaiming that our startups or news coverage offer some nebulous cosmic benefit – well, it usually does not fly. First it was semantic search or “natural language”, terms pseudo-gurus even were remiss (and still are) to define properly. Now we run into startups like Swipp, Inc., from none other than Palo Alto, CA. Now to the point, “Are we really ready for more social intelligence, more contextual data streams, are we even ready for any startup aimed at shoving more products in our faces?

Okay, I started off writing this really enjoying what these developers have going on – then it hit me… Something that exists at the juncture of where all my friends, my personal data, and my deep seeded desire to buy something or other, it’s just plain evil.

CEO and co-founder Don Thorson has been “Swipping” his team’s startup into shape, according WIRED’s Ryan Tate, actually “quietly honing its social search system” until BANG. Even Tom Foremski admires the team behind the data/social/whatchamakawlit Facebook ankle biter. Even Foremski ends up categorizing this startup’s real value as;

“Ratings could be just one use, just one app; there is a lot more that Swipp will be able to do once it connects up the universe of things and people.”

Excuse me, but what the heck does that even mean? “I think the thing may be okay to do lots of stuff that people are already tired of hearing about, especially once the Great Wizard of Oz ordains it so??? Foremski is brilliant, if he can’t figure out what this thing is actually good for, I can only attempt to assess. 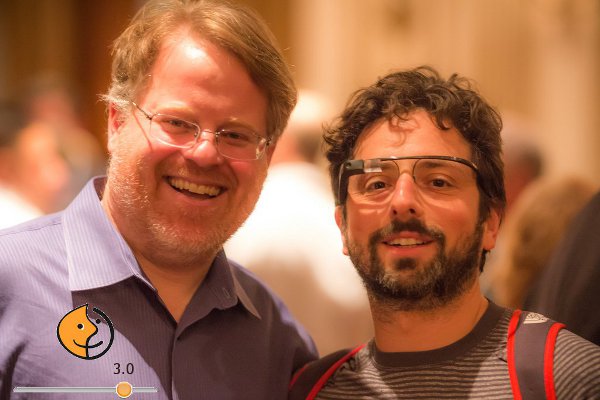 I think if I have to hear one more Silicon Valley tech guru use the term “roll out” and “incremental” in the same paragraph. For me, this simply means the author is sick and tired of writing for the day and just snatches some buzz terms off the press wagon for whatever startup is being pushed. Two years and $3.5 million in Series A funding and the Mountain View startup is ready to take on… Take on BIG DATA with a series of smiles and frowns? It’s a bit like a really fast and cute tripadvisor, only without the ugly green and tedious review process.

Emily Price over at Mashable uses even more James Earl Jones (ish) tone to entonate what Swipp is capable of. Price has some good insight into what the startup can do, stuff like showing users how the world feels about the exact moment when teenagers decide to like or dislike a particular song. While this may be useful for some really tweaked music producers and ad people, the data set required to have any real meaning would be massive. Or, the sort of database Facebook or Google, even Bing or Yahoo! have in place. Oh. Therein may reside the real purpose for Swipp, a place to land and call home.

About now the reader, and the people who have invested time and energy into Swipp, are probably asking; “Which side of rage did Phil wake up on this morning?” I’ll tell you. The side that sees sound bits get 600 plus shares, the side that sees highly intelligent and exquisitely capable people reduced to blabber, when USA Today recommends something that can count, and when TechCrunch… Wait, you know what, Darrell Etherington’s review of this service is actually the best.

Did I test it? That’s your next question, isn’t it?

Download – super slick, fast and painless; learning curve, almost absolute zero; UI and design – damn near perfect; usefulness – good for travel?… The 2,300 plus people per square mile inhabiting out part of Germany are THRILLED I input data into Swipp’s database. I am the only one. If I Swipp this iPhone I am using? Hey, I rated Apple Inc. just slightly below the norm of 3.5 for today. So far a whole 264 people on planet earth have Swipped Apple. Now for the first German beer reviewed from the Mosel River (later on today), yes this app could beat TripAdvisor by ten miles (don’t tell the developers I was nice here, let’s see if they read this far)

I’m heading out right now to buy the all new iPhone. As for Robert Scoble and Sergey Brin, I’ll just wait and see what they tell me to buy next. Isn’t that what this is all about?

Was I mean? Okay, I love the logo, so here’s the link to iTunes.