Saveology, the innovative daily deal startup making headlines of late, has now launched their discount deal website for Boston. Saveology users now have access to more than 28 national and local markets. If it’s simple and carefree you want in “opt in” dealing Boston, now you got it.

Localized and targeted offerings have been a sort of Holy Grail, since before Yahoo! Local launched, and Saveology is obviously engaged in capitalizing on the power of “where people live” in their almost constant release of new markets. The company dogma of “win-win” for clients and merchants, in their case, obviously rings true. Though their platform is merchant centered, accessibility to offerings is key to consumer savings in many cases. 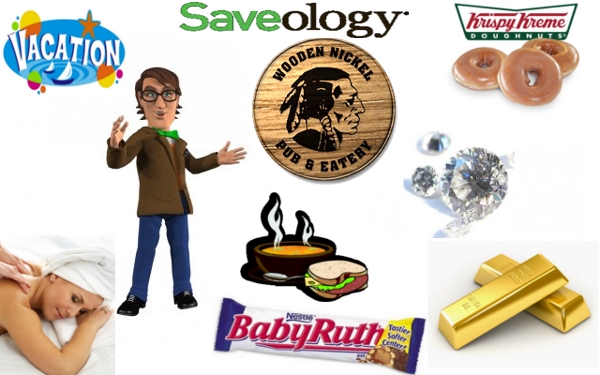 Save on everything from diamonds to a pig in a poke

Saveology is not rocket science technology, but it is old school logic in putting people where the savings are, and merchants where the people are. Saveology claims to have some four and a half million users. On the one hand, the platform is super impressive – it solves a sure point of pain for a niche of shoppers. On the other, the tool is really a bit too simplistic. Saveology actually just lets users do the work of marketing to themselves. But, this is not all together a bad thing.

Now Boston can climb aboard Saveology super simple conduit for deal platform. Just to check out the Boston deals, I signed up. For a site tester like me, simplicity and speed are big pluses, I must say – and immediately Saveology impressed even me. Type a few bits of info, and BOOM! The user in Boston is introduced to their first deal. Literally a kick butt coupon for Jiu Jitsu master training. 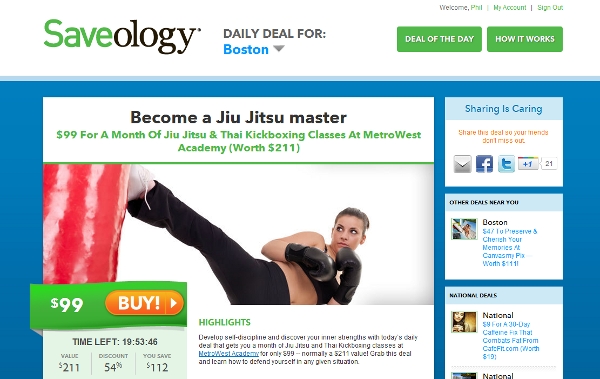 The deal today in Boston via Saveology

If you are looking for a deep platform or searching merchandise, or any kind of conventional shopping esperience, then Benzion Aboud’s Ft. Lauderdale startup will disappoint you. However, if notifications to your mailbox, and a quick way to check out great offerings in your area is appealing, then Saveology is near perfect. You may not need Judo training, or a wagon full of cupcakes this morning – but you might some bright and shiny day. Applied to travel? Aboud added this about the Boston market:

“We are excited to launch a daily deal portal in Boston with the large tourist pull and students from more than 100 colleges, the city has a vibrant nightlife scene with numerous popular fine dining and entertainment venues.”

So far as I can tell, travel is actually a peripheral consideration for Saveology now. 7 day vacations and the like are almost all on the national level, but when you think about it, this only makes sense. A really nice feature here would be adding some sort of filter to reveal just logical places for Boston peeps to travel – a navigation tool for clients intent on going somewhere. But then, the platform is a startup, so there’s lots of room for improvement.

For more info on Saveology, please read their press release here, click on the links provided, or visit their Facebook aspect here. 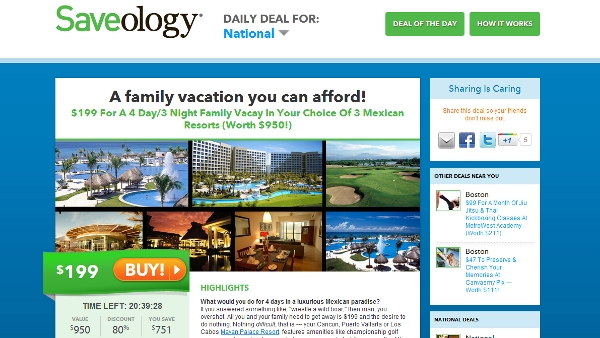 You can go places with Saveology

“Wheel the World” Hurdles Travel Barriers for Travelers Using Tech
Lend Me Your iPhone to Test the “Backdrop App” Game Changer
Game-changing AI-powered Travel Innovations
VR Travel Experiences that Shape the Future
Previous: The Blessing of Sheba and the Aksum Obelisk
Next: Paradise By Any Other Name – Cyprus