Good news may not travel as fast as it once did, or either there may just not be so much of it out there. Whichever the case you find, one couple knows how to show off their expertness. Mr & Mrs Smith helps guests and online visitors escape the mediocre. Let us show you how.

Phase One – Being Great Hosts

It’s one thing to be able to create a refined and acclaimed business model, to preside over guests as if your hospitality were the last rampart of some holy city, there are a few hoteliers who still effort such things. Showing off what the Ritz Carlton does with superb marketing gurus, resting a legacy like a brand – the Waldorf for instance – provides, these too go hand in hand with exceptional hospitality brands sometimes. But, very, very few companies, hotels especially, understand that hospitality extends to the digital world. At least not many as apparently effortlessly as James Lohan and his wife/co-founder Tamara Heber-Percy have. 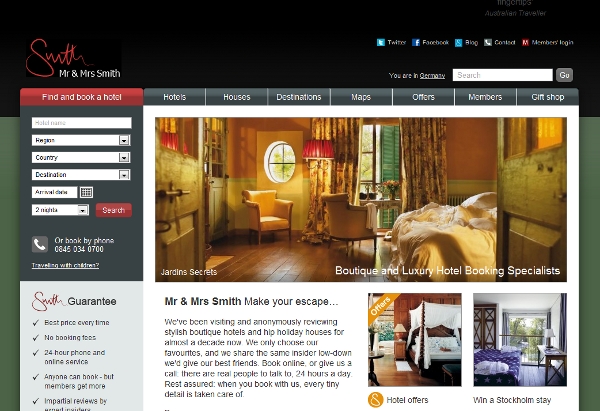 Lesson one, create a welcoming place to land - the MMS landing page

The untrained observer (or marketeer) is saying; “Okay, big deal, they have a nice website.” Not exactly nice there, Herr Rocket Scientist. Look closer. I’m not going to go into “F” pattern psychologies, calls to action, my old aesthetics pitch, but looking at this landing, it is as near perfect as I have seen for the type. Comfortable, the correct balance of green/black, subdued, yet highly functional. Study what the color green conveys, images, etc. Then we move on to prevalent but minimized social media icons – not buttons mind you – icons can be buttons, but…

Continuing, but at the other end of those “buttons” on other hotel sites, there isn’t a perfect ratio of fans or followers “engaged” – more precisely, “talking” about Hilton, Marriott, InterContinental, Taj, etc. Look at the info page from Mr & Mrs Smith’s Facebook aspect below. Hilton Worldwide, by comparison, has 2,600 fans of whom only 167 are talking. Marriott International has 34,565 fans, and only 835 of those have voice. IHG is at 85 peeps talking, Taj Hotels and Resorts at 338, you get the picture. No matter how immense the resources, not one of the big boys compares with Mr & Mrs Smith. 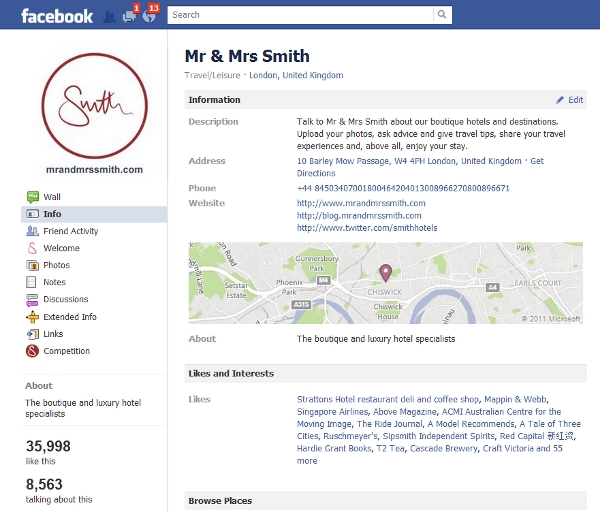 A Little Bird Told Me

Twitter is the same for Mr & Mrs Smith apparently, with one brilliant distinction perhaps. While most major chains might have more Twitter followers, the level of engagement has to be lacking in part due to a misperception in the corporate mind. 100,000 Twitter followers does not a two way conversation make. In the first place, no one on Earth can “listen” to 100,000 people. But it is possible to “monitor” and engage a few thousand really well. Look at the Mr & Mrs Smith account below.

By design or not, it's easier to listen to a throng than a horde

In fairness to Hilton, their Twitter aspect is fairly balanced as well. Marriott has something like a 13:1 follow to follower ratio, but Hilton’s “listening” capabilities seem not much worse than Mr & Mrs Smiths. But, here is where that distinction ends. A superb blog, a YouTube Channel with a sexy and seductive luxury about it (see the video below), more accolades than you can shake a stick at, the idea is solidified. This is why people chose boutique luxury in the first place.

Let me break down the biggest reason I got impressed here. Outside the team in place to personally assist guests on and off line. Despite the no booking fees – beyond all the fantastic pictures and media any web traveler could hope for – Mr & Mrs Smith has apparently leveraged all the channels more efficiently than even the biggest hospitality players. Of course my assessment here is not wholly scientific (but if I had the funds I think I could prove this). Take a look at the blunt tool of Alexa rank below. 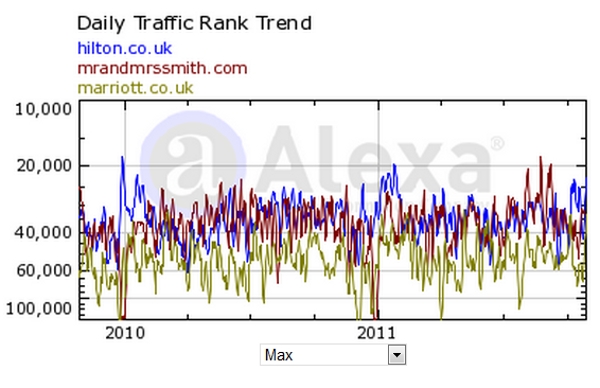 Hilton, Marriott, and Mr & Mrs Smith - parity despite price, number of rooms, and other factors

If Mr & Mrs Smith’s efforts have a flaw (or two), it may be in news and deal outreaches to outlets like ours here. Also, despite the fairly high visibility of the company’s founders and agents, a stickler for me is hospitality people leaving contact data out front. If I pay a lot for my luxury, I damn sure want to be able to get the manager – or at least see his or her smile. Aside these tiny imperfections though? Want a luxury boutique in Cyprus (my quick test case) badabing badaboom – Londa and the honeymoon suite for a week – about €5,000. (add some bigger pictures of my great suite tho guys).

And there you have it, perhaps the most hospitable boutique hotel chain on Earth. Oh, you’re asking; “Why is all this digital mumbo jumbo important?” Attention to detail and future clients my friends. I don’t know about you, but I choose a hotel group that takes the marketing budget they’re given and produces Hilton or Ritz Carlton results. Imagine what that mint will taste like! Phil out for now.

Hopper Taps Into Hostaway Client Base in Lastest Strategy Move
AI-Powered Pathfndr Announces a Slew of New Features
“Wheel the World” Hurdles Travel Barriers for Travelers Using Tech
Lend Me Your iPhone to Test the “Backdrop App” Game Changer
Previous: Billions in Airline Fees – No Laughing Matter
Next: As Travel Costs Go Up, So Shall Profits…