Lufthansa presents, Detours, a way to book the vacation of your dreams Lufthansa Detours booking section.

Lufthansa presents, Detours, a way to book the vacation of your dreams

Right before Christmas Delta Airlines and American Airlines unplugged the Christmas tress of several online travel affiliates. AA seats will no longer be available online at Orbitz, and Delta clients won’t be able to book at the cheapoair, Bookit, or OneTravel dot coms. For many experts, a big shakeup and destabilization of online travel is at hand.

The news of American Airlines trying to dump Orbitz was not the first signal of what may become a major shift for both online travel companies and core suppliers. Not many people outside travel know, but the airlines have been cutting out the OTA’s as middlemen (partners) for some time. Yes, that’s right, the larger players like Expedia made a shift some time back away from depending on flight bookings. But this latest move by Delta and AA is a bit like unringing a bell where good business is concerned. That is if their intention is to dump the OTA’s as a marketplace. 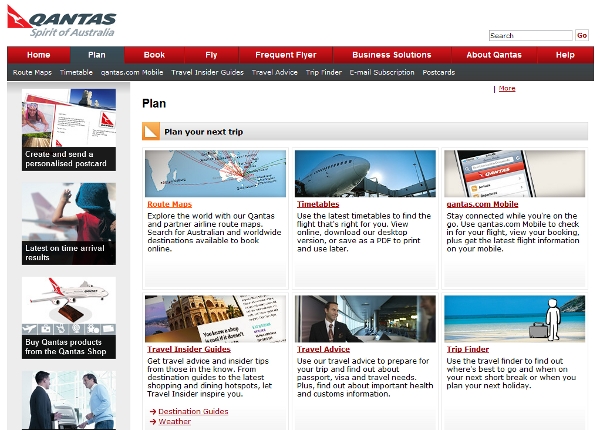 Can an airline make a travel portal? Quantas thinks so

Looking at Orbitz in the midst of all this, one has to wonder if larger unseen forces are not at play in the travel market. Ironically (or decidedly) Orbitz basically lives or dies by selling airplane seats. While Expedia and other OTA’s made a shift to hotel bookings and other added client values for revenue, Orbitz clung to cheap tickets for their margins. Any more shakeup in for their business plans could spell bankruptcy. Conspiracy theories or contracting market indigestion, its pretty clear there are going to be some big losers in travel for 2011.

Are the airlines prepared to create their own online travel portals?  If Delta Airlines can be used as an example – yes. Their websites speaks of emerging travel community a bit, as much or more so than their outreaches via Facebook and other social media outlets. They even have their own iPhone app now, as if Orbitz and the others thought multi-billion dollar companies could not hire programmers? 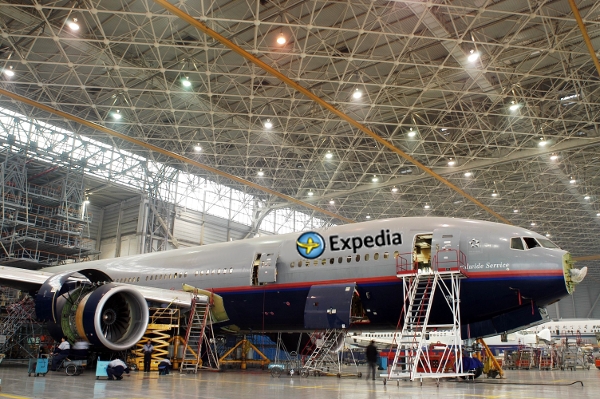 Expedia's fleet or airliners under construction

Turning back the clock for online travel is  of course impossible, but ringing one’s own bell more loudly than a middle man or competitor, that is decidedly possible. Unfortunately for Delta Airlines, while the idea of selling travel deals and bicycle rentals rings true for them too, somehow the “know how” just isn’t there yet.

Interestingly, and to illustrate how complicated the world of online booking has become, Delta’s reach into OTA’s is extensive. Put simply, big airlines play a major role where profitability for OTA’s is concerned. If you want to find a vacation package for instance, looking on the Delta “wannabee” travel agent site, you could manage to put together a nice deal. But visiting Kayak for instance, far greater flexibility and simplicity abound – and an fascinating connection – Orbitz, Delta, and Kayak linked inextricably by a destination and vacation offering, as seen below. 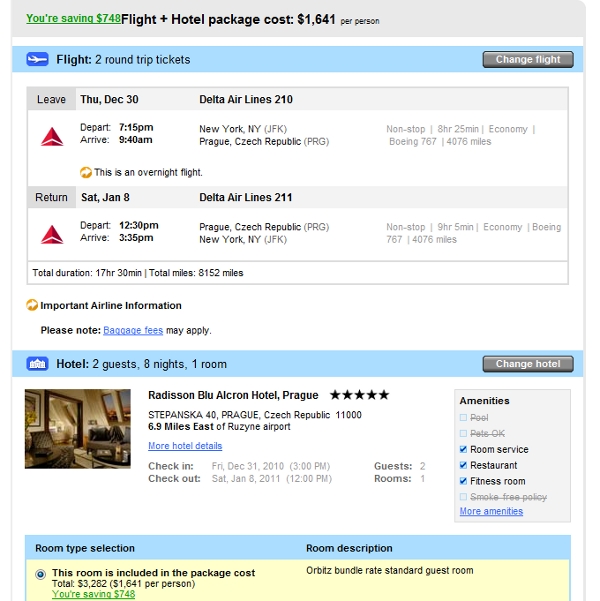 Kayak, Delta, Orbitz all in one search?

Complexity abounds in the profitable world of travel all around. Travel agents to front desk clerks, everyone basically owns a tiny piece of your vacation or business trip. American and Delta pulling out on Orbitz and others comes as no surprise. From the start of the shift toward customers booking online, Delta and the others toyed with the idea of their own website. Just looking at the Sojern initiative, 2008’s airline collective, shows corporate airlines’ inclination (if not their intelligence) toward their own online footprint.

Google Travel. FairSearch. Delta and America abandon the OTA’s (or at least some of them). What the traveler is seeing is not a system in flux to provide greater flexibility and value to them, but one grappling with its own profitability. The OTA’s needn’t worry for losing commodities to sell – especially ones where there is no margin. When Orbitz goes belly up, and all the small players are gobbled by the big fish, who will operate the lever then? “We are sorry, Kayak no longer offers flights from Delta, but special deals from Quantas are available to offset your inconvenience.”

When American Airlines, Continental Airlines, Delta Air Lines, Northwest Airlines, United Airlines and US Airways launched Sojern back in 2008, a Senior Vice President with Delta, Bella Goren, had this to say about the move:

“The capabilities of Sojern will enhance our customers’ travel experiences, and we are very pleased to pursue this opportunity.”

Sojern is an advertising tool folks. This quote from their “about” statement says it all: “Sojern offers advertisers cross-channel marketing solutions by leveraging real traveler data to form powerful audience segments and analytical insights.” The good news for Kayak and the rest of the OTA world is, Delta and American could not build a better OTA if their corporate lives depended on it. Look at the American Airlines attempt below next to Orbitz. 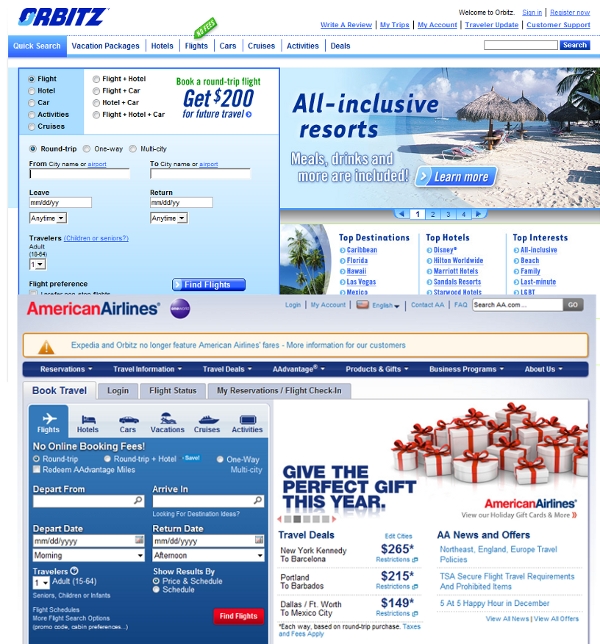 Cloning a good OTA's website may not cut it

In conclusion, or should I say “in concluding for now?” The Google ITA deal, FairSearch’s collective attack thereof, and now the apparent wars between service providers and middle men illustrate the effects of not only economic downturns, but competition within an industry. Where online travel is concerned, an industry with unparalleled potential and possible profit. Expedia just made obscure American Airlines offerings from their industry leading web pages – just in support of Orbitz. Yes, more likely as a warning shot across AA’s bow. 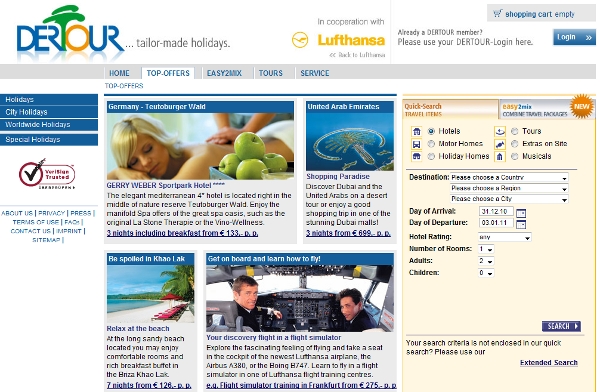 Lufthansa presents, Detours, a way to book the vacation of your dreams

For Orbitz the sale of airline tickets is crucial. Interestingly, here in Europe airline ticket revenue for OTA’s is scarcely even a variable where margins are concerned. It will be interesting to see who has the most influence here as the battle between players for travel dollars heats up. Ultimately wherever the customers are will depict the winner. As a final note, Expedia and the others cannot actually start building airplanes – but Delta and the others can surely build a travel portal. More as the war progresses.

I leave you with an interesting commercial from Lufthansa.

Campspot Publishes the Top Outdoor Travel Trends for 2023
Ideas to Make the Most of Your Visit to Phuket
Trends Say Americans Guarded Over Travel 2022
27 Inspirational Travel Quotes to Fire Up Your 2022 Travel Bug
Previous: Greek Firm to Develop in Dion Area
Next: Belarus Fashion One Channel Goes Live