Triposo: The power of innovation, and, is machine thinking enough?

Triposo, the brainchild travel startup from ex-Googler’s Jon Tirsen and Douwe Osinga, just announced their new iOS app, the story arriving via TechCrunch. So, Argo Travel News decided to take a look under the hood of this fascinating new travel guide/suggestion engine. Read on for a bit of what’s happening – what’s possible – what should be even. 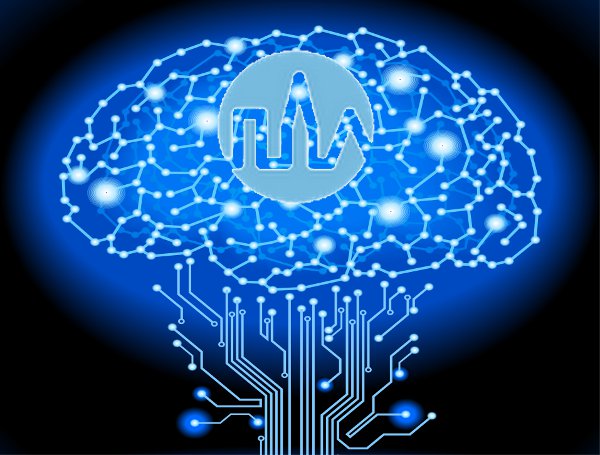 Triposo: The power of innovation, and, is machine thinking enough?

Reading Rick Empson’s coverage on this new Triposo play, it’s easy to see Tirsen and Osinga, their team, have put a lot of thought into just how people will consume travel data. At least some people, that is. For those who have not read the TC article, the new Triposo download covers iPhone and iPad, to offer the same open content from Wikitravel, Wikipedia, World66 and Openstreetmap, among some others, it has for Android, for travelers far afield. We tested the iPad version, replete with 20 key cities, along with some basic data (a bit too basic in some cases), and a whole lot more. Kicking off, the company dogma claims:

And the iPad version we downloaded delivers on these for the most part, praticularly where the major cities and sites go. The map aspect, offline, leaves something to be desired however, and calling a few dozens of restaurants in Paris “extensive” is a bit of a stretch too. Aside developmental negatives though, the interface is up to snuff. 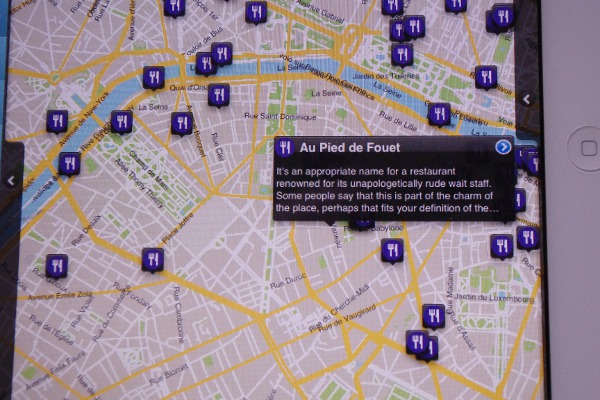 As you can see in my photo of the iPad, filtering for restaurants, the area around the Seine shows only a fraction of the actual number existent. And, if one were looking for an open content complaint button, including reviews from other sources can be tantamount to spreading a false rumor, for this development or any. For me, Tripso shoots themselves in the foot (digitally at least) in not expounding on their apparent future plans, plans that may in fact pivot their startup dreams into fast. But, their ongoing dilemma, or one of them, will always be whether or not their fascination with algorithms (and the inherent value) wins out, or some form of human filtering is applied. Guessing cuisines is one thing, how the cuisine tastes? Quite another.

Surfing about within the app, I also noted strange little notations and quotes all along. None more these was more unappealing for this user than the negative review at Au Pied de Foute, and I quote from Triposo: “It’s an appropriate name for a restaurant renown for its unapologetically rude wait staff…” First off, this blurb about one of Paris’ most famous, and best inexpensive eating venues does nothing for any user of Triposo. We dined here the last time we were in Paris, the small bistro offers the best French cuisine, at the most reasonable prices, anywhere in this part of town. And the wait staff, given they can scarcely navigate between customers’ tables, are the epitome of Paris friendly. And too, Parisiennes may be second only to our Italian neighbors in the “friendliness” department, but that’s fodder for another travel analysis.

Where Triposo, or any travel tool for the matter, loses out is – in offering up to users “cookie cutter” content. The absence of what some Web 2.0 gurus forecast as the coming rich media experience, is a prominent negative in my view. When you download Triposo, and you should and will, you’ll also note some map/content issues. The Paris map, for instance, is not so interactive as to allow scrolling too far South, or North in search of more restaurants (museums? Whatever?). A disadvantage of using static programs maybe? You see, “suggestion” should not encroach upon choice, be it human or machine powered. Regardless of how brilliant the developers may be (see some below), there’s no arguing houses built by electrician contractors can tend to have crappy plumbing. For programmers out there who hate my parables, this just means you guys suck at the normative side of things (look that term up). 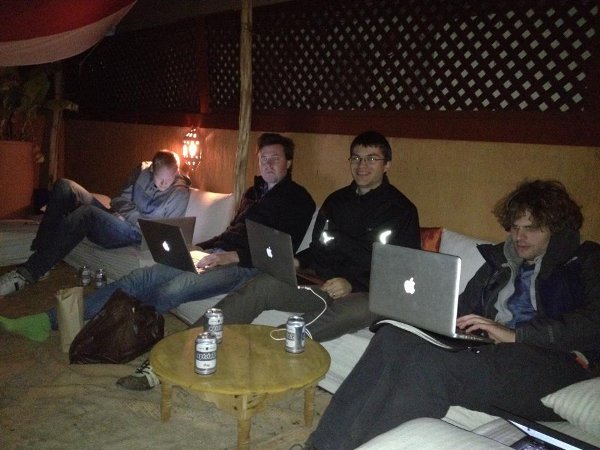 As advertised, the service grabs content from Wikipedia and Wiki Travel, which is not a bad thing at all really. However, Wiki Travel and other mainstream sources do not posses what I would term “premium destination data”, meaning – when all is said and done, one can see the Eiffel Tower from many blocks away, but maybe not a small but tasty Paris cafe. Triposo, sooner or later, has to build a matrix of original content, be it user generated or from a provider. Being enamored with the growth of Wikis is understandable, cooking digital stews and serving them in leu of those made with Porky Pig?

Cutting new startups slack for just being new, and limited in content has to some extent gone the way of the Dodo for me personally, we do a lot with very little so… Launching Paris with a few shopping streets (as below) is ludicrous too. There’s a boutique on every corner in the city.

Therein resides the problem for all such startups, the chasm in between what one develops for users, and converting users into content providers. Fill in the dots. TripAdvisor showed us people at least want to know what other think, but the world’s most popular travel review site also showed us that skewed opinions are worthless too. As for the real value for any coming travel application, it’s not the big destinations that really matter, now is it? Having researched hundreds of thousands of venues and destinations in our content work for Stay.com, and for Argophilia Travel, our own East Europe site, it’s the “details” that matter in the end. 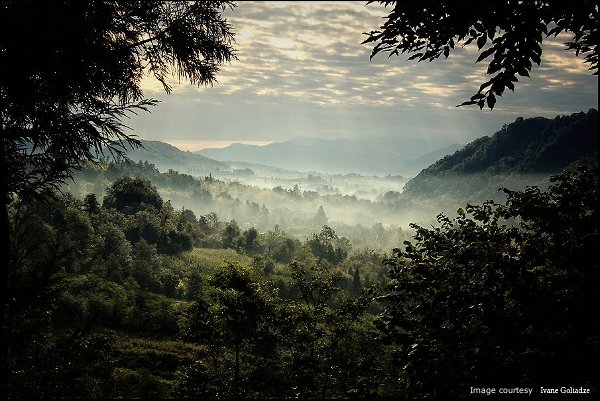 Looking at Triposo in Georgia (the country) for instance, content is sparse and even less appealing for potential users. For the little Black Sea wonder Poti, for instance, reading about a “not so interesting” (a quote) via a Wiki blurb is… Well, a bit insulting at both ends, in my view. Kolkheti National Park, just outside of town, and places like photographer Ivane Goliadze’s grandparents’ view (image above), convict Triposo and every other online travel startup of mediocrity.

Locals everywhere must truly hate inaccuracies via online portals, as much as the incumbent traveler who wanders in to the cafe or bar because Triposo, TripAdvisor, Stay dot com, or TripWolf say so.

Poti, may not be Paris or Rome, but the place has its own flavor, charm, and so on. And for a startup that aims to address the needs of backpackers, as Triposo seems inclined to do, the wonders of wilderness outside small towns worldwide is most relevant. Check out their Facebook. Open source, free web types have sleepless nights over privacy, using one another’s code, APIs, and so on, but where’s the human spirit in all that? 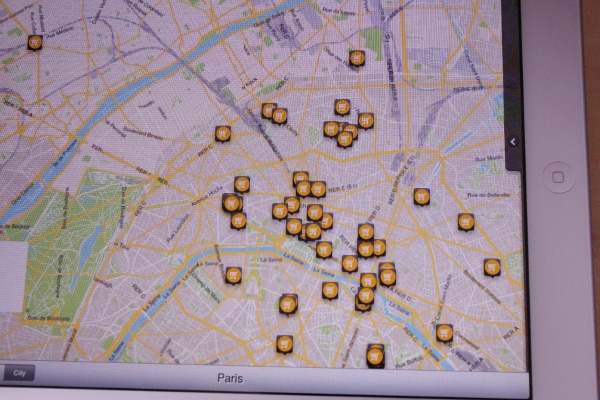 So Far, So Good Though

What’s positive about Triposo so far outweighs the negatives, and this is the view of TC’s Empsom as well. Being free, being a bit like Stay.com’s app and available offline (no roaming fees), foreign language help, plus the little weather updates and so on, has made the app appealing for quite many so far. Whether or not publicity and TechCrunch articles can extend, along with some investment dollars, or not? You, the user will tell, obviously. As an early stage endeavor though, I have to call Triposo a big win given their progress so far.

Where other innovators seem to have hit speed bumps, the former Google boys seem to have grasped, at least developmentally, the fast track for jamming in early value (and marketing). But then, adding Michael Arrington’s winnings from the TechCrunch – AOL deal into the pot, I’ll leave off on these comments for now.

Still, I like Triposo. The idea behind it reminds me of the search engine wars back when Powerset, hakia, Wikia Search, and Google were pitted against one another. The intersection of algorithmic wonder, human powered search, and even true artificial intelligence reached notoriety then. Algorithms won out, for the most part. But, it also seems clear those other concepts will inherit search and relevance at some point. Nuff said there, but travel or turnip crops, businesses operating online or via mobile had better listen up at some point.

The winner, any winner in the future race for travel app popularity, is simply going to have to offer reality. Scraping Wikis, auto-inclusion of TopTable or Zagat reviews, the lazy man’s idea (or the programmer mentality) of technology applied to tourism – will simply never win out over refined presentation from both worlds. In a nutshell, ex-Googler’s are gonna naturally be inclined to program around value. The experience, with every app I am using on my iPad, may be cool and useful, but it ain’t reality. Factor in damnable bandwidth and charges, and you feel my pain.

There are no exceptions here. Doing the hard and expensive work of providing a true travel resource, this is what has so far not been done by any company we know of, not completely. Verdict: Keep at it Triposo, you got a good start, and the wherewithal (intelligence wise) to go much farther.  And don’t let your brains get in the way.

We leave you with video explaining more about Triposo, enjoy.