For traveler dependent on their mobile phone, a company called Toktumi has created the Line2 application for iPhone. The application basically allows iPhone users to utilize Wi-Fi and VOIP networks for greater coverage and even cost flexibility. Apple’s approval of Line2 spells potentially big bonuses for their mobile users, and the app is 100% free.

This slick mobile app from Toktumi is actually a sorely needed option for iPhone users who desire to have, and keep separate, both a personal and business phone number. The game changer here though is that iPhone owners who want to cut down on their monthly voice minutes may be able to by allowing when they place calls over Wi-Fi and 3G Voice Over IP (VOIP) networks. Think about this if are one who travels often for business. Toktumi Line2 Delivers for iPhone

The normal bells and whistles one would geek about on the iPhone (pictures, video, apps) all from your phone, don’t help you for the most important part: calls. And we all know the struggles with AT&T in good signal areas, let alone spotty ones. The iPhone business woman can make a her business number more reliable while she’s hopping on and off of Wi-FI and 3G VOIP services – isn’t that a game changing element?

Now I know in the back of your mind you are thinking; “what about Google Voice?” Google Voice routes a single number to multiple phones and while the phone is ringing, requires you to determine whether the call is business or personal. Line2 cuts that decision out, separating your business and personal contacts into separate tabs and allows incoming calls to easily sort themselves. The interface is impressive and easy to use — basically visually identical to the iPhone’s own phone interface. And, a very intelligent web interface management tool also allows you to set up very specific rules for incoming calls. 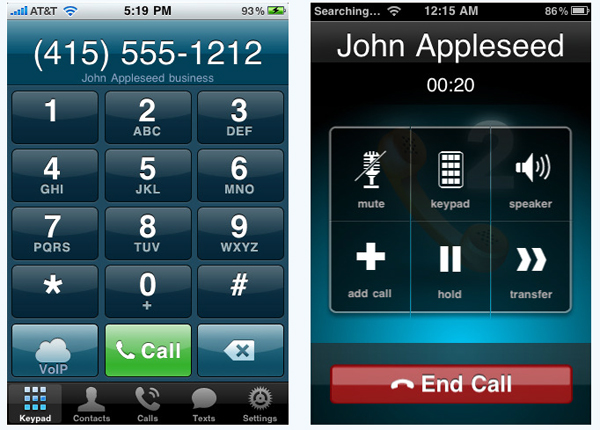 For example, you can send all business calls direct to voicemail after 6 p.m., or on weekends. In version 3.0 that was released in October of this year, Line2 now supports SMS text messaging. Here’s a quick glimpse at the big boys of what the web control panel can pump out:

Google might be the big dog by comparison to Toktumi, but Line2 is Google Voice on steroids + 5 hour energy + sugar free red bull and a protein shake to boot. Plus, Apple likes Line2 and does not like Google Voice! Did I mention that it can save you from AT&T signal issues? On all calls, including conference calls, can be placed over regular voice, Wi-Fi, or 3G VOIP — think flexibility. Line2 can potentially save you voice minutes, and give you alternative options in low AT&T voice service areas. When on the go in airports, in the hotel lounge scarfing down a burger — the flexibility of Line2 attempts to nullify the possibility of missing an important call.

Line2 offers iPhone, iPad or iTouch (2nd generation or better) users a full telephone line for their device. Available in the App Store now for free, users get a 30-day free trail of the full service. If they enjoy the service and want to continue after 30 days, they can do so by paying a $9.95 a month — which includes unlimited calling and texting within U.S. and Canada. By comparison, a monthly SkypeOut plan costs $3 a month and works on a plethora of different devices, even though Skype’s messaging doesn’t work as well and has per-message costs associated with it.

The VOIP space is crowded, and everyone is grasping at ways to make the smart phone generation happy with connectivity craziness. And for travelers, both business and personal — the ability not to miss those important calls is critical. Line2 is just the first of many trying to shoot the moving target that is VOIP – and it looks like their aim is pretty good.

Lend Me Your iPhone to Test the “Backdrop App” Game Changer
Game-changing AI-powered Travel Innovations
VR Travel Experiences that Shape the Future
A Grain of Salt and H2O Hospitality Gets You 2.5 Star Bliss
Previous: Allure of the Seas, the Biggest Cruise Ship in the World, Sailing Your Way [Video]
Next: Albania, Bosnia-Herzegovina Get Free Visa Privileges