In Sochi, every milestone is cause for a gathering of hundreds, if not thousands. Here T minus 101 people gather in anticipation. Courtesy Nina Zotina Sochi Countdown Clock

In Sochi, every milestone is cause for a gathering of hundreds, if not thousands. Here T minus 101 people gather in anticipation. Courtesy Nina Zotina

News that tickets sales for the upcoming Sochi Olympics are largely unsold is pointedly not true. With the cheapest “sold out” resale seats to the Ferbruary 6th gala going at a premium above $1200 now, nothing could be further from the truth. That is, except western press and political notions Sochi is some kind of third world terror den. The facts are quite different, not what you’d expect reading all the negative. 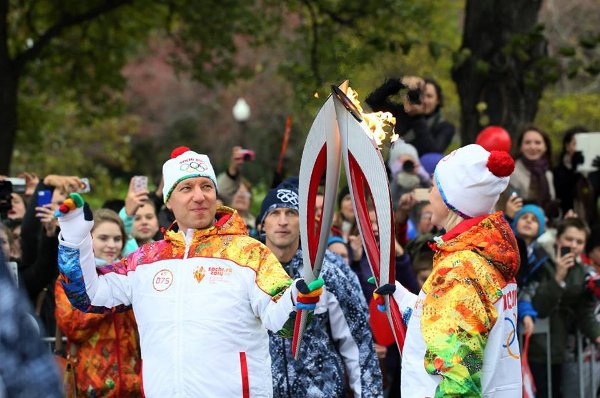 As the eternal flame of humankind’s most revered athletic event heads for Sochi, the eternal politics and propaganda persist too – Courtesy Sochi City Administration

We’ve made it no secret here at Argophilia that the focus of our news portal is Eastern Europe, and with Sochi 2014 right around the corner, informing people about the magic places of the region is all the more a priority. That’s why news from a multitude of major media companies of a terrorist under every rock, of the Olympic Games in Russia as a disaster before they start, this is the reason for our existence actually. 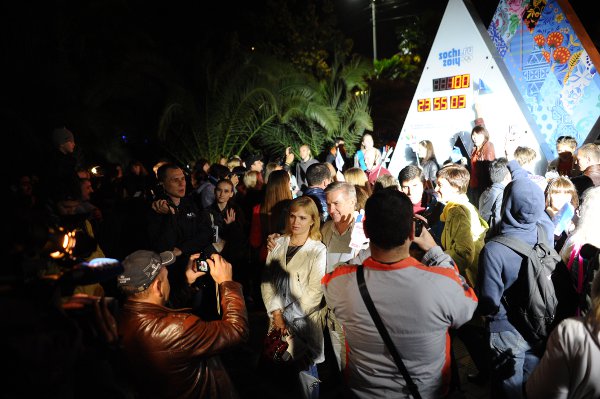 In Sochi, every milestone is cause for a gathering of hundreds, if not thousands. Here T minus 101 people gather in anticipation. Courtesy Nina Zotina

A media effort for our network now underway in Sochi is already uncovering what we suspected all along for the games the world has dubbed “Vladimir Putin’s” Olympics. Horror stories have been coming out of the  Krasnodar Krai, region of Russia ever since Putin’s country won the bid for the Winter Games of 2014. In fact, we’ve even focused a time or two on the potential for environmental damage to the delicate ecosystem there. Not unlike the Vancouver Games of 2010 though, these Russian games have actually seen less environmentalist fears and alarm than the Canadian games did over Native American issues etc.

For Sochi and Mr. Putin, the onslaught of negative stories, Russian mob violence to slave trading and hard labor grinding the Sochi venues into Mother Russia’s soul… this sort of brainwashing is utter nonsense. In the same way you never received news of the Santa biker’s gathering in Sochi (below), the crowds scampering for tickets in Sochi and online have escaped media consumers. 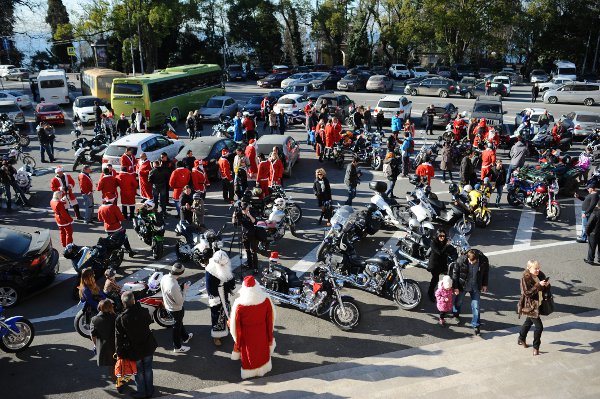 Last year we set out to find the true stories of Sochi, Russia. Under the wire, so to speak, we quite naturally made friends with good people from this part of Russia, and on Facebook no less. Not exactly the network you’d expect Russian speakers to inhabit, Facebook pals all over the world reveal more than what you’d expect of the places and issues we so often read about. Two locals we’ve been acquainted with for some time, photographers Pasha Kovalenko and Nina Zotina, they’ve shared some of their insights with us which we’ve started to report. And notably, searching tickets for events of these games uncovers a truth western press somehow has ignored. 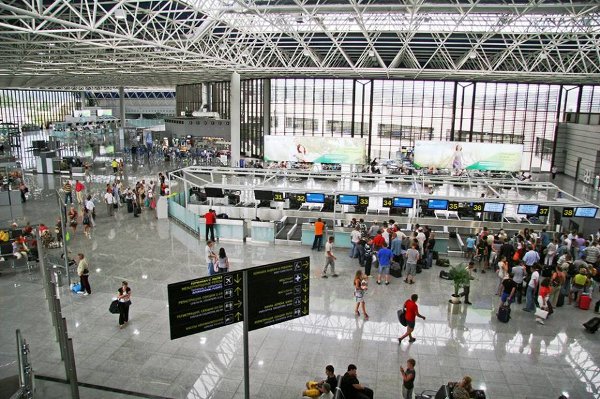 A view of Sochi-Adler. Sochi tourism traffic grew 14 percent last year – Russia scarcely needs outside traffic to the games for them to be successful. – Courtesy Sochi city administration.

Sochi’s main events are all but sold out. I tried to find tickets just yesterday on the official Sochi.ru site in English, and guess what? Unless you grab now most medal events are impossible, major galas and main events are booked, and even many of the preliminaries are absolutely sold out.

If I did not know better… Well, I’ll leave off finishing that idea. (either these reporters hate Putin or NBC one) Let me share with you a report that assumes viewers or readers are complete morons. Now this is on mainstream television in the United States. In this report Alyssa Newcomb reads here script from on above and relays some misinformation. True enough there are tickets avaialble, but in the report you’ll denote ABC makes it sound as if Vladimir Putin had better get out there and start selling in person. Yes Men’s Luge tickets are $29, and there’s some left even for the medals events. But has the reporter ever watched a luge event in person?

Standing on a steep slope waiting for someone to zip past at 90 mph, those brief instances of unrecognizable athletes going by, not exactly women’s long program figure skating finals they aren’t. Factor in the committee can sell one hell of a lot of luge run spots to stand on, versus arena seating, and a truer picture comes into focus.

Finally, if we look back at Vancouver, the ticket monopolies and ticket scams, all that was negative about those games, yet so under-publicized, the biased against Russia’s games becomes even more clear. Also looking back at coverage of Vancouver, this USA Today piece paints the rosiest picture of Olympic travel wonder imaginable. I almost wonder who paid for the coverage (I’ve been accused of commercializing editorial myself, for less). Comparatively, Vancouver can easily be said to have been the games of the true “mob” – one where everybody from hoteliers to billionaire merchandisers fleeced fans like the worst kind of scalpers. Ironically, Vladimir Putin as a sort of KGB slash Russian mob boss iron fisting the Sochi celebration? Well, he’s not near as evil nor mafioso as his North American counterparts, now is he?

If Sochi were so desperate and so unwanted an event, this Russian Czar could certainly fill the venues with Gulag prisoners, now couldn’t he? Yes, you can get a cheap standing spot for the Men’s Luge, but the the women’s final in Figure Skating? Forget it. To be continued, from Sochi, Russia (and not ABC studios in New York)

I leave you with the essence of what all of us should remember about Olympic competition. That is, the pure place the idea of the games come from. Be good sport newscasters, or shut up and let an athlete report. “I Want Gold” –  Russian advertisement for Sochi.