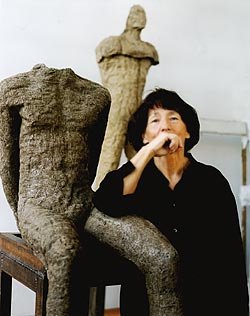 Earlier this month works of Poland’s celebrated sculptor Magdalena Abakanowicz went on exhibit in Warsaw. Made up of mostly never before seen pieces, the exhibit at Warsaw’s House of Plastic Arts Gallery represents the latest revelation of the talents of the now prized artist.

Abakanowicz, whose works grace institutions such as Paris’s Pompidou Centre and New York’s Metropolitan Museum, became famous back in the 1960s primarily for her so-called ‘Abakan’ sculptures. These works of woven fabric, via a method she herself invented, have become iconic pieces in art circles worldwide. This latest show not only reveals further pieces in that series, but also previously unknown works in painting and drawing.

Born in 1930 in Falenty, Poland, Abakanowicz is of Tatar ancestry, and noble birth. The artist first studied at the Academy of Fine Arts, Warsaw, Poland. By 2006 she had completed in Chicago the “Agora” (below), what remains the largest figurative sculpture of our time. From Abakanowicz’s website testament, we took the following statement about art:

For readers who would like to know more about the artist, her website offers a unique view of her life and work. The exhibition “Abakanowicz? Abakanowicz!” runs until 2 February.