The second semi-final of Eurovision 2013 took place last night in Malmo. Ten winners move forward to this weekend’s Grand Final that will reveal Europe’s best performer and song of the year. Malmo Arena was the scene of a press conference today. Country representatives drew to establish whether their representatives are to perform in the first or second half of this year’s final. On the humorous side of the contest, our own multinational observations from a PR and political perspective have been altered somewhat. Watch Romania’s Cezar in rehearsals below, to discover why.

Welcome To a Brave New Eurovision

Watching last night’s semi, and reflecting on just how wonderful this year’s acts are by comparison, both of our general partners and many of our staff have revisited just what the trend for this year’s Eurovision is. At first our favorites and ethereal contemplations of higher ends came into play with Russia’s Dina Garipova, to put it simply, we really do think Russia is entering a new age of prosperity and philosophical idealism too. Okay, maybe we are dillusional, but look at the tone of favorite Denmark!

The song by Emmelie de Forest, the perfect lyrics, the superlative stage presence, and those drummers! You see the paralell. We just have to make love, not war for sure now! But then there’s Britain’s Bonnie Tyler, I mean who could not believe in “Believe in Me”, when all is said and done?  You yearn for more symbolic echoes, do you? What about Armenia’s wonderful Gor Sujyan? I mean throw in some “save the world” idealism and a bit of guitar wizardry from a Kiss legend – Lonely Planet, it just gets a little less lonely. Oh, we are on the second semi-peeps, sorry.

When Cyprus took a nose dive into the loser pond, I just knew their PR (or lack thereof) tossed in the towel. I won’t go into our little part in that effort, suffice it to say somebody made a bad decision, and leave it at the marvelous Despina standing in the rain. Dadgummit! We are on semi 2. Okay, now comes the revelation of revelations. 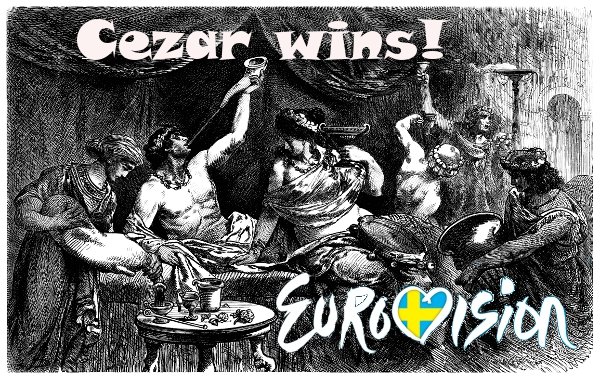 First off, we cheered like Dallas Cowboy cheerleaders when the votes showed there is a bit of sanity left in the world, and some kindness and cheer too. When Malta’s Gianluca showed he and his fellows’ smiling demeanor before and after their performance, and even jamming the camera when their move forward was announced. You guessed it, Malta deserves to win if only for the figurative sense of park bench glee. And now that we have traversed the best of semi-final two, it’s time to walk on the darker side of entertainment (maybe even politics) in today’s world.

Frankly everybody at our offices was stricken at seeing little (in population and cosmopolitan cities that is) Moldova’s entry into Eurovision 2013. Aliona Moon represents a country that by all rights should (in my humble opinion) have never been separated from Romania. When I saw Romanian’s cheering her performance online yesterday, well, I was taken with hope and vision, to be honest. Moldova obviously has a lot more to contribute than economies and business in the EU would suggest. Okay, then there’s Finland’s Krista Siegfrids and the aptly named Ding Dong Girls. Need I go there?

Over the mountains of the entertainment moon, down through the valley of musical death, Eurovision 2013 contests ride, and boldly ride to two culminating conclusions. Okay, predictions by our staff. The winner of Eurovision 2013 will undoubtedly be….

When we first heard Romania’s answer to Maria Callas in britches, Cezar, our Romanian staff (including my partner) called home to see if aliens had attached the motherland. Caesar is, just that shocking a revelation, especially coming from an innately masculine place. But after a while, once the earful of irony corterizes the brain a bit, this guy is really talented and artistic. Yes, I said so. However artful and over the edge Cezar is though, the sight of him dressed for the world like Dracula himself (sort of in drag), and with those vibrator looking red daggers coming down from the ceiling…

Male dancers akin to Dante incarnate, Cezar taking on an almost ominous personage… In the right light one can easily picture this Romanian on Broadway one day. And now just may be the time for Romania’s Eurovision win, a big one that will be. My only problem lays somewhere in the dark depths of soul, that place where Eurovsion has its first tie. Synthesize the union of Moldova and Romania, in the persons of Cezar and Aliona Moon – Lordy, the resultant offspring of reunified Romania might well resemble Caligula, or something even more sinister. But Cezar, it may be your time.

Scenario Two – Peace to Our Bretheren

Back to planet Earth, and departing from The Inferno of some Armageddon future, Denmark will win. Here’s why.

A Farewell To Another of the Small Gods of Crete, Nikos Zacharioudakis
A Word or Two About Ryanair CEO Michael O’Leary and Other Bean Counters
Expert Viewpoints: Hospitality 2021 and Beyond
Actress, Singer, Songwriter Rita Ora Vacations On Corfu
Previous: London’s Rankings as a Major Centre for Business Tourism Improve
Next: Coast Hotels Rebrands in Purple