Via Michelin: Can Bibendum Fix Blowout?

In news from one of the world’s best known names in hospitality, Michelin, celebrating the company’s 10 year anniversary online come with revamped Via Michelin website. Argo Travel News takes a look at Michelin’s entry into the competitive realm of online travel guides, but our initial thought is; “Is someone at Michelin kidding?” 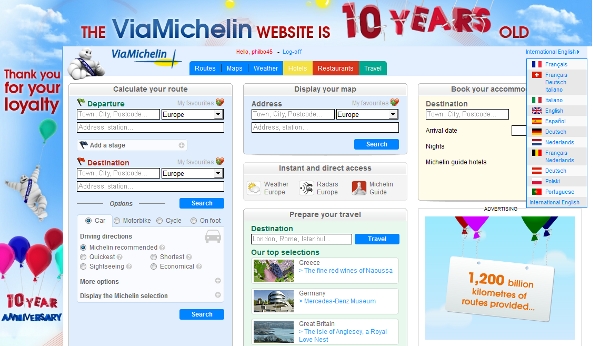 Happy Birthday Via Michelin - Time for new party clothes though

Not many people out there could fail in recognizing the world’s foremost authority on travel for at least a century, Michelin. A press release via PR Newswire and Yahoo! today, reveals a sort of “update” as to where ViaMichelin is headed, and the innovation people have come to expect from this famous company. What we found hardly encapsulates what travelers the world over have come to expect from Michelin.

Aside the balloons and other festive design elements that greet Via Michelin visitors today, the company has increased the usability and nav there a bit too. The following updates appear according to the company’s release: 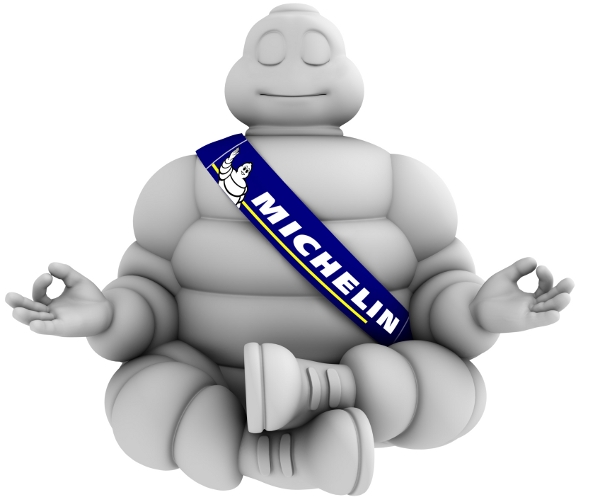 While these user interface and navigation changes seem noteworthy for the current Via Michelin users, submitting a press release solely about them seems a bit wasteful, even overzealous to me. For a site with far more user experience problems than a couple of tabs, Via Michelin would have been far better advised to bundle this news into a much more broad package. I am saying this from a professional digital PR standpoint, rather more than a technology innovation expert one.

Just look at the map overlay below to get an idea of Via Michelin’s task ahead. Sure, showing thousands of Michelin listed restaurants is a positive, but never as the default where users might drill down into one’s site matrix. Make no mistake, Via Michelin has created a primarily map driven travel tool here – so there’s not getting around map nav being cutting edge. 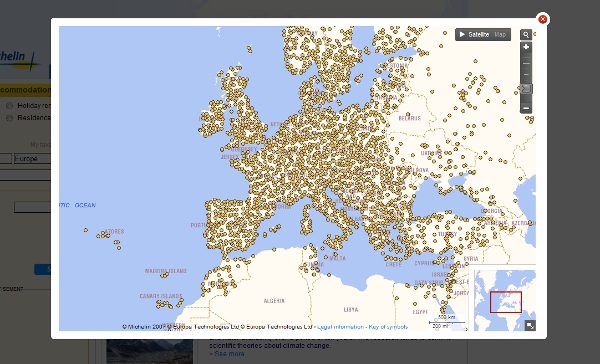 To put it bluntly, using Via Michelin’s unparalleled data on hospitality bears an equally unparalleled negative user experience. The site is disjointed and cluttered at best. To illustrate my point, Michelin has the most detailed and complete (credible) information in the world (in my view) of restaurants. I’m not talking simply about Michelin starred Gordon Ramsey eateries either, but real reviews and ratings of a vast number of places to eat. The image below is of our little are of the world, Scweich, Germany. As you can see, once I have taken the map view above, and zoomed to near maximum, at least 3 restaurants in our little village appear. The Hotel Schweicher Hof shown, is a very nice affair with the best location in the city. 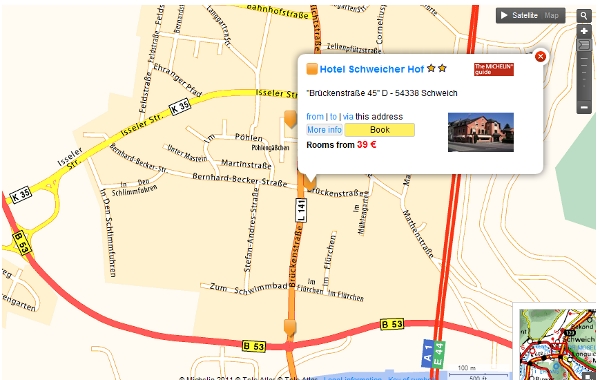 Via Michelin's map element, outdated but still getting you there

Now, using a simple Google search for restaurants near Trier, Germany, or more precisely Schweich (or roaming about on Google Maps) one can come up with even more restaurant info – websites, locations, phone numbers, etc. But, these queries do not exactly carry the weight of Michelin behind them, now do they? So my point? At the optimal, Via Michelin (Michelin) is still credible and viable in the digital world roughly because of their brand – and only marginally as a digital tool. Think Google plus some trusted professional reviews. I hope the reader (and Michelin) see my point. So much for map oriented users.

Google search for restaurants - faster and with far more potential

In a nutshell, Via Michelin promoting slight website functionalities such as their travel tab, no matter how cool and useful (and the new one is all that), is nonsensical. Without the core user experience value, the vested resources in making Via Michelin into a world class affair (outside the obviously superb data) is a waste of Michelin’s and our time. You can as easily set up your iGoogle to tell you far more, and in less time.

Just so the reader understands, Via Michelin actually has far more detailed and refined information (on a wide range of destinations)  than virtually all  the so called online travel sites of prominence. As an example (just one of many) the total number of things to see in Bucharest (my wife’s hometown) is 36. Expedia’s touted TripAdvisor only lists 40 and one of their’s is the savings bank! I’ll grant you a city of roughly 4 million has one heck of a lot more to see than their banks. Of course even Via Michelin is lacking where Bucharest is concerned, and where images and other media make a difference, the point is; this superb content is not optimized for visitors.

Bibendum looking down on Via Michelin - and maybe he should?

There was a time when seeing ole Bibendum sitting up there looking over a Michelin entry may have garnered even the most skeptical of supporters. But, that time is not now. Adopting Via Michelin as a tool in anyone’s digital toolbox is going to take more than that. Think of it this way, would you trust your family on Michelin’s after an unexplained blowout? Not without ample proof of trust.  We should expect more from Michelin, a lot more.

Campspot Publishes the Top Outdoor Travel Trends for 2023
Ideas to Make the Most of Your Visit to Phuket
Trends Say Americans Guarded Over Travel 2022
27 Inspirational Travel Quotes to Fire Up Your 2022 Travel Bug
Previous: Georgia’s Black Sea Jazz Fest 2011
Next: Boingo Takes Off with Gogo in an Airplane Under You