Turkish Airlines Chairman of the Board Hamdi Topcu

Turkish Airlines has announced their expansion in the United States with this week’s launch of its newest gateway in Houston, Texas. 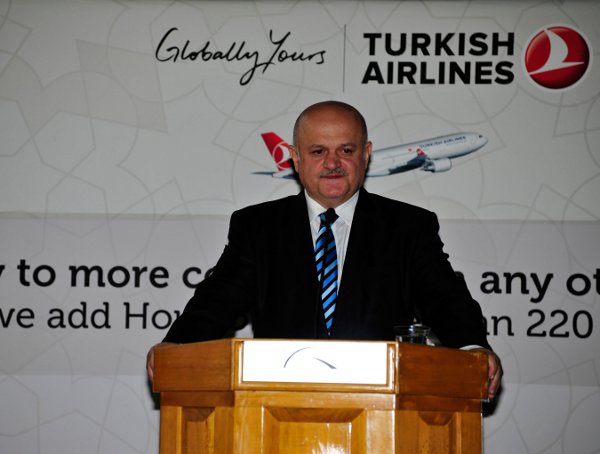 Turkish Airlines Chairman of the Board Hamdi Topcu

According to the news release, Houston becomes the fifth U.S. gateway, along with Los Angeles, New York, Chicago and Washington, D.C., for one of the world’s fastest growing airlines. Now travelers can rely on non-stop service in between George Bush Intercontinental Airport (IAH) and Istanbul’s Ataturk International Airport (IST).

“We’re delighted that Turkish Airlines can now serve the Houston community and better connect them with our services to 220 destinations globally via Istanbul. Houston is a key point in the international aviation. We believe that these new flights will make international travel easier and more convenient for both business and leisure travelers in the area.”

About Turkish Airlines:
Established in 1933 with a fleet of only five airplanes, Star Alliance member, Turkish Airlines is today a four star airline with a fleet of 215 aircraft (passenger and cargo) flying to 220 cities around the world, comprised of 36 domestic and 184 international destinations. One of the fastest growing airline companies, Turkish Airlines has received several “Passengers Choice Awards” from the consumer ranking group, Skytrax.

Campspot Publishes the Top Outdoor Travel Trends for 2023
Ideas to Make the Most of Your Visit to Phuket
Trends Say Americans Guarded Over Travel 2022
27 Inspirational Travel Quotes to Fire Up Your 2022 Travel Bug
Previous: If Sochi Were Disney World Headlines Would Read: “Mickey Wacked by Russian Mob”
Next: The World’s Must See Dive Sites