A Savory Set of Travel Startups: Book One

We hear in the news almost every day about the big players in online travel. Expedia, Sabre, even Microsoft, but so seldom does the real “meat and potatoes” of the online travel industry rise into popular news. Today we thought we would introduce our readers to a few up and coming online travel companies. From the rewarding Aeroplan and Russia’s Amargo to Wokita, there’s a world of rising stars and would-be OTA zillionaires to be made. Let’s take a quick look at just a few.

We came across a great number of somewhat “unheard of” jewels and gems via a quick trip past OpenJaw Technologies’ site. As it turns out, a great many small and big players use that innovative company’s various technologies in their quest for being the best.

A to Z Travel Giants (or midgets) In the Making

Aeroplan is a very cool loyalty based system, one of Canada’s best such services by Carlson Marketing, that affords customers ovious deals and savings while contributing to the environment. What happens is, you get your handy dandy Aeroplan card, or become a member, and you get to spend all those sky, hotel, or other purchases like reward miles on airlines.

But the service is a bit more flexible than that. Let’s just call Aeroplan a Penny’s Catalog for peeps who travel a bunch. You can trade like 3,500 miles for a drug store gift card even. Like Groupon for travel nuts sort of. As services go, I am not sure this one is the most beautiful around, but a great many people take advantage of it. Did you ever hear of Aeroplan?

Amargo is a fairly new Russian company that set out to help people find and book trips to and from anywhere basically. The service is currently used primarily by Russian speakers, but the service is available in other languages too. Clients can plan trips that include airfare, hotel, car rent, visa, insurance and excursions, to list a few.

The cool thing about Amargo is the potential to book everything from planes, trains, and autos, to entertainment. On the down side, the site appears to have a few bugs when switching between languages or navigation to some pages. At least in Opera (which is not uncommon).

Though I did not see the entertainment aspect on the site, the Visa help and other added value are there. The site is also very minimalist and simple to use. I especially like (and hate) their little logo. It either says “peace” or cross your fingers, if you catch my drift. Amargo certainly looks to be able to fill a much needed niche for Russia travel especially.

ColorLine is Norway’s largest and one of Europe’s leading cruise and transport shipping lines. The six ships of the company traverse between the ports of Norway, Sweden, Denmark, and Germany. The company also operates in the spheres of restaurants, retain, entertainment, and tours. While not a cutting edge web portal, or even close to being one, ColroLine has the reputation to carry the company forward.

But don’t expect these guys to take over online bookings even in Norwegian cruises. Their site traffic is very sparse, and it appears their search hits only come from GB and some peeps who happen to know about the company.

These guys, given the quality of their services, need to spend some money with outreach and branding. Too bad, the prices and tours too look very appealing. This could be a super nice service many people have never run across.

Globogo is taking aim at the Latin American market and wants to be the predominant choice for premier travel to Mexico and other destinations South. Another of OpenJaw Technologies’ little sites that can, the company has put up a crisp little website that defines the way such regional players should interject.

The site is not rocket science, but it is minimalist, simple, and aesthetically pleasing enough to grab passers by. Of course no one is actually passing by right now as the site is only in Spanish and the Alexa says 1.5 million on the world stage. Still, with a bit of marketing and some affiliates, it could help a lot of peeps find great deals about the Caribbean, Central, and South America.  With 40 percent or more of its traffic coming from search, it looks as if the company has all but forgotten their creation? Time will tell on this one.

Meridiana Fly is an Italian union of two airline transport businesses; Eurofly and Meridiana into the country’s second largest entity.  For flights in and out of Italy and across the region, Meridiana Fly is a key player apparently (never flown em myself).  As websites dedicated to travel go though, the company has done  clean and crispy job of putting up a booking site that anyone can use with ease. As for the deals, those look pretty crispy too. I noticed immediately a flight from Amsterdam to Florence for € 78, not bad for just sticking a seat out there.

Meridian Fly (I hope I am saying this name right) already has a thriving little network on Facebook,  and over 1230 followers on Twitter they broadcast to (only following 66). No one said Italy was the most socially wired place in Europe any way, Italians are too busy having real fun to play with Twitter, right? This one is paying its own way already. It is one of the top sites in Italy and in the world when it comes to it.

If you want a real surprise and an aesthetic kick in the pants too, GreatNextPlace’s landing is the best I have seen in 8 years of covering startups. Just the balance of white space atop simplicity is enough to make me want to visit. Of course my taste is not everyone’s (it probably should be), so the developers here decided to let their clients order a la carte as if Gordon Ramsey were behind the travel kitchen doors.

You fill out your request, and 48 hours later the company presents you with “vacation invitations” – customized offers/suggestion for your dining, err, traveling pleasure. A novel idea, and one  that may have its place in these disruptive times. They bill the service; “Extraordinary Vacation Planning – Refreshingly Simple, ” and by the look of things it’s no lie. According to a Reuters article by Deborah L. Cohen two weeks ago, founder Tom Filippini got the idea from various cocktail parties. What better place for the synthesis of the Colorado startup to begin? Sign up to see, it’s in private beta testing now.

VoyagePrive.com is my favorite of the lesser known sites. This elegant take on online travel exclusivity looks so appealing anyone will just have to sign up to discover what’s inside. Judging by the site’s metrix we can find, especially in GB, it appears as if a great number of peeps have already ventured inside. The latest news and claims suggest there are over 6 million members?

Like I said, VoyagePrive is a members only thing, so you have to beat it over to Facebook and pray someone will invite you. Or at worst use their email address to get an invite perhaps? Voyage Privé offers hand-picked selections of upmarket breaks and extended stays plus some supposedly inspiring holiday deals. Some say you can save up to 70 percent on selected luxury vacations.

Last, but certainly not least, a little site called Wokita (yeah I love it and it is a W after all) is a tour operation that his also affiliated with OpenJaw and is an part of the aforementioned Meridiana Group. What the service offers are budget travel packages – flights, hotels, cars, etc. What I like about the site is its layout and of course the oh so catchy name.

Seriously though, the site’s design does lend itself to users easily discovering what is for sale, and best of all the best deals available. I am a bit surprised the company has not pushed this one a bit harder. It seems to be primarily an Italian favorite, though the site is available in a variety of languages (more than any of the others mentioned?). Look for this one to become more popular or be sold to a big player. 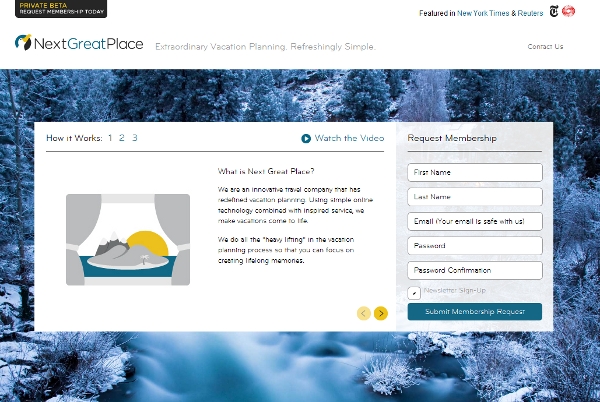 A Summary of Some Special Sites

With all the news about Expedia and Orbitz, Google and ITA, American Airlines and Sabre, it’s no wonder the world of online travel can be so confusing – especially for the traveler. With the so called “big boys” taking all the news, the little players, even the really great ones, must struggle for visibility at all. Expedia spends almost $8 million a month to get traffic from Google! How is the little guy to get seen? Well, here are a few to start off with. Please let us know your thoughts and experiences. And any you find worth mentioning, don’t hesitate, okay?