We had the opportunity recently to speak with clinical nutritionist and media health expert Stella Metsovas about her recommendations for travelers and lovers of Greek foods in general. 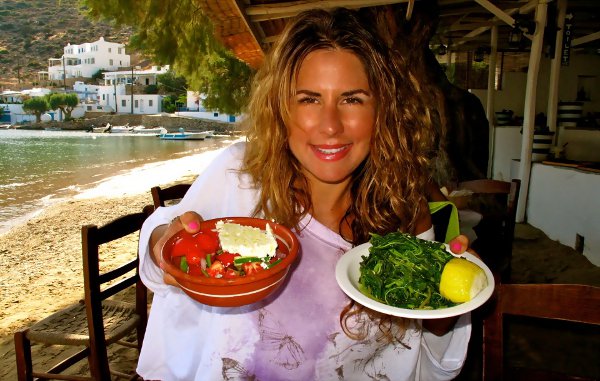 For 15 years now, Metsovas has been immersed in food and health science, human nutrition, and evangelizing the ultra healthy lifestyle. Stella has been a featured expert by; People, Glamour, Shape, Redbook, the New York Times, the Wall Street Journal, Woman’s Day, and scored of other authority publications.

Stella graciously accepted our invitation to speak about Greece in particular, and the wonderful foods travelers or interested people can take home from that rich culinary tradition. The following is a brief Q & A we had with Stella. Her knowledge on these subjects, as you will discover, is quite impressive and extensive.

Argo Travel – Stella, since we are focused on Greece with this story, just how healthy, comparatively, is the culinary tradition across Greece?

Stella Metsovas – Modern times have definitely impacted the traditional Greek diet. I remember back in the early 90’s, supermarkets had limited supplies of pretty much anything processed.  My Yiayia (Grandmother in Greek) used to give me some drachmas—the old currency of Greece—for spending on food shopping errands, or when I explored on my bicycle.

Common snacks then included watermelon paired with feta (my personal favorite), or goat yogurt with honey and walnuts, or a granita (shaved ice with syrup). Fast forwarding, what I’ve noticed now in Greece is completely different than, say, even 15 years ago. The diet of modern Greeks has changed even more considerably over the eons of time, and you notice this far more so in the city, rather than the villages and most of the islands.   I’d say Athens now has become very similar to southern California—you still have elements of healthful selections (California is known for the health crazes), but all the temptations of Westernized foodstuffs.

Still though, when I travel to my husband’s village outside of Sparta, within the city you have numerous options, including massive markets with junk food galore, and there, you see the difference in cuisine, especially among the youth.  While I’m in the villages on the mainland and islands though, you really feel the culinary traditions of Greece.  I feel, almost, like the adults in these remote places feel happy about not adopting the easy way out (i.e., processed foods).

Then, at the Laiki Agora (the farmer’s markets in Greece) you will get a sense of traditional ingredients used for Greek cuisine.  You’ll also find various types of vegetables and fruits, always according to the season.  Seasonal dishes are very important to the Mediterranean diet—the real Greek diet.  You probably won’t find Horiatiki salads in the winter because tomatoes and cucumber aren’t in season.

Argo Travel – I know that in the states, people often dine at restaurants that are supposedly authentic Greek. Why do you think more restaurateurs don’t take the trouble to infuse real traditional methods and ingredients into their menus?

Stella Metsovas – Well, I do think most restaurants base their menus off of actual sales volume rather than farm-to-table (i.e., seasonal cuisine).  I recently traveled with a notable chef from New York who basically invented the concept of purchasing seasonal ingredients from the farmers markets and creating dishes based on what he found.  I learned all about his culinary standards, which sounded almost like an ancient philosophy compared to what we see in restaurants today.

Most Greek restaurants here in the States are either doing something really cool and unique—think fusion, like Baja meets Mediterranean—or they are serving the boring-but-good souvlaki and tzatziki, Greek’s version of Pommes Frites served with brizola (steak), fakes (Greek lentil soup), gyros (which technically isn’t even Greek), stuffed bell peppers, and so on.  The cost to produce a dish like psarosoupa correctly probably outweighs the cost of stocking it on the menu, whereas my summer favorite, astakomakaronada (lobster and spaghetti) might be more prevalent on menus because pasta’s shelf life is endless, and lobster could be frozen.

I’m really looking forward having a Greek restaurant that stocks their menus like a typical village in Greece.  Think lamb stew in the late winter to early spring, cabbage dishes in the winter, varietals of horta (wild greens) according to the season, and so on.  I must say though, some Greeks here in Southern California are getting really creative with fusion-Greek. Petros in Santa Barbara and Kentro Kitchen in Fullerton are doing some really interesting menu items. Surifin’ Souvlaki in Mission Viejo serves a So. Cal (aka, Southern California) salad with a ½ chicken, grilled lemon as a garnish, and local avocados—I stay far away from the Baklava ice cream though because it’s so tempting.  Another personal favorite is Kafe Neo with their Seafood Saffron Soup.  And, of course, Tony’s Taverna in Malibu is a must for the traditional California Greek menu.

Argo Travel – We know that in ancient Greece the mainstays of their diet were more limited in variety and number than today. Do you have any recipes Stella that would approximate the diet of the Ancient Greeks, say with fish and legumes, etc.?

Stella Metsovas – The ancient Greeks were big on foraging because of all the hardships they encountered with storage techniques and weather conditions.  Barley was key to most of their starch-based dishes, as were olives, cabbage, onions, lentils and beans.  The ancients also had a strong affinity for fruit, both fresh and dried; figs were often served with appetizers and wine.  The consumption of meat varied according to region—those who lived by water consumed fish, and mountaineers were more apt to consume birds and rabbits.  Pig and goat were always served as celebratory unless you had amassed some form of wealth.  The Spartan warriors were fed very well having consumed what I might call, a Paleo-Greek diet, heavy on the stewed meats (obviously for muscle and endurance building).  Oh, and let’s not forget the wine!  The ancients loved their wine.

Argo Travel – Of all the local favorites you have tried, which would you most recommend from Greece for being down right healthy?

Stella offered us at least one special Greek recipe, a genuine Spartan warrior soup, which we hope to publish with a more extensive collection of her fantastic creations very soon. Summing up, for those of you out there interested in a healthy lifestyle, and interested in the genuine culinary wonder that is Greece (all of Eastern Europe actually), we encourage you to expecially follow Stella’s various initiatives.

For this writer, I am  headed up to the kitchen to provoke Mihaela (partner, wife, journalist, and super duper cook) to wrestle us up some Greek treasures for lunch. Thanks Stella, this was so nice of you. I include below Stella making a wonderful Greek Stewed Chicken on Cat Cora’s Kitchen. “Mihaela, Mihaela, can we make this for dinner?” See you soon.