In hotel news from the Russian Federation, hotel values there are expected to rise, as well as in the Commonwealth of Independent States, and the Republic of Georgia, according to several reports. Some estimates suggest the growth rate at up to double that of other countries in Europe.

An article I just read by Hotels Magazine’s Jeff Weinstein, discusses a HVS report just released showing an expected 7% increase in hotel valuations there projected by the end of this year. At the top of the story, Moscow’s upscale offerings appear to be skyrocketing, the optimum per room value at almost $537, as compared with nearly $484 last year. After values plummeted in 2009, it appears a recovery of sorts has put Russia’s industry at just above where it was in 2007. 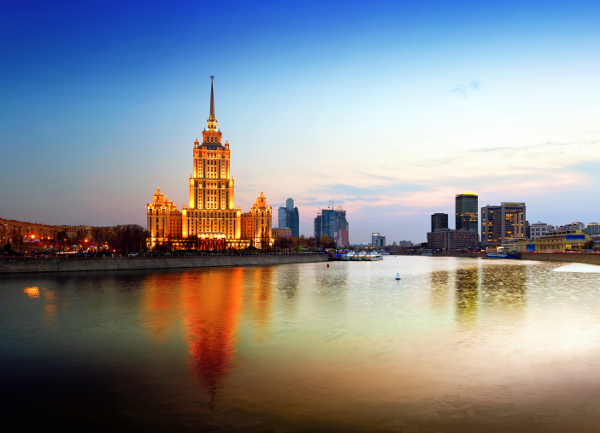 This report from HVS (PDF) in 2009 show the state of the Russian Federation hospitality industry as clearly as any we’ve found, back then. according to the 2009 report, optimum hotel values (the most expensive like the Ukraina above) were $518 in 2007, $466 in 2008, and $310 in 2009. The new report not only reveals hotel value recovery and growth, but the potential market for the Russian Federation even with some fairly massive hurdles.

Despite super expensive flights into some areas of the Russian Federation, and time gulping Visa hassles to boot, arrivals are on a steady incline according to HVS’ Moscow and London bureaus. The chart below, via Euromonitor International – form the HVS report, illustrates what happened to the Russia market when the bubble burst and the trend now. Obviously, there is a direct correlation between International arrivals – demand – and prices. 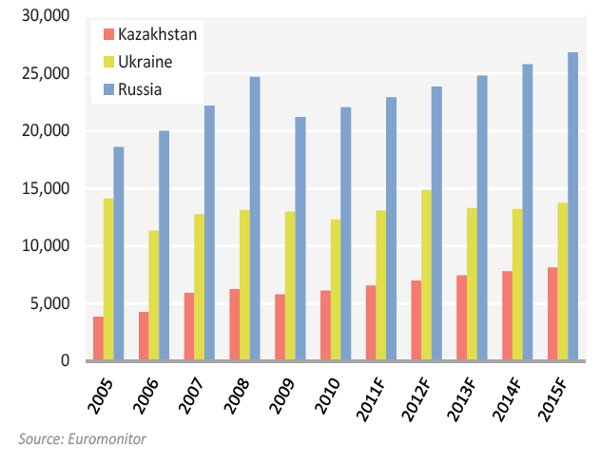 The Euromonitor data for Armenia, Azerbaijan, and Georgia shows and even more dramatic trend in inbound visitors. Two factors seem evident from these reports. First, Russian hotel inventories are among the lowest of any developed country. Even Southeast Asia inventories are higher as related by rooms/population. The HVS reports show that even Moscow only has a ratio of 1.3 hotel rooms per 1,000 citizens there. Comparatively, other major world cities come in far above this quota:

This sampling of city data from HVS points to the clear economics of the Russian Federation hotel situation. Even comparable cities like London, have a supply of rooms that far exceeds Moscow’s, and other cities inside Russia are far worse where finding a room is concerned – to say nothing for the costs. As a projection, it would seem highly profitable for Hilton or others of the major chains to start planning for building. This is my view, anyway.

There are risks however. Uncertainty in governmental stability has plagued all the countries of Eastern Europe for decades. The high costs of travel, especially within Russia, provide further stumbling blocs for potential travelers, not to mention investors. And, where outside investment is concerned, there is a dire need of institutional investment support within the Russian Federation. The HVS reports clearly magnify these facts. Euro 2012 and the coming games in Sochi, provide hope and a conduit for infrastructure improvements too. But still, many positives such as domestic demand for International brands, make the Federation, potentially, one of the most appealing investment opportunities in all travel.

We will keep you appraised of these trends as news arrives. For now, please read Weinstein’s story for added details, and visit the suggested links to HVS and Euromonitor (their Twitter). You can download the PDF from the HVS home page here, and follow them on Twitter here too.