Yesterday we began a series on online travel agency CEOs, and a recent interview conducted by USA TODAY’s Veronica Gould Stoddart and Roger Yu. We analyzed a bit, some key decision makers’ mindset on the question of whether consumers want (will get) richer content from these industry giants during their travel searches. Expedia, Orbitz, TripAdvisor, parent Expedia, Travelocity, and Priceline bosses all had their views there. 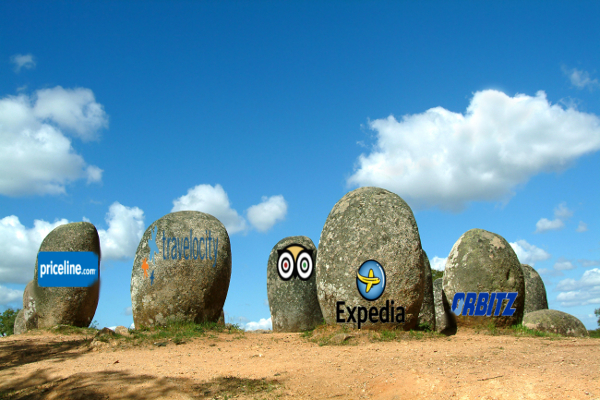 Another question put to the makeshift panel of industry giants affords still more insights. The CEOs were also asked:

“Some customers believe the user experience and technology at online travel agencies (OTAs) haven’t changed much in recent years. Your response?”

Jeffery Boyd , CEO of Priceline.com, was first to respond. Let’s comb through his answer:

Boyd – “I don’t agree. All of us have spent hundreds of millions of dollars building faster, better user interfaces. Our Booking.com offers hotels in 90 countries and 50 languages and 170,000 hotels, a number (that) is up 60% year-over-year. A lot of that represents new geography. Mobile platforms (are) a massive positive change in user experience and functionality.”

As in yesterday’s analysis, Boyd starts off with the voice of reason. No bones about it, Booking.com and all the other entities have spent plenty keeping up with the times. Positive changes are a reality too. But, compared to what user experience could be? Well, that’s speculative. Let’s move on. Boyd always seems to have the level head.

Durchslag – “There is an opportunity for the travel industry to be more innovative, really embracing technology. We’re looking at a (service in which) Expedia (is becoming) the Netflix of travel, to stream you perfect trips with highly relevant and personalized offers. I don’t think the consumer really wants to go shop at six different sites.”

If fencing were the top leadership quality, Durchslag would look more like Errol Flynn than an OTA guru. Expedia is anything but progressive in budding technological innovation. What Durchslag does here is fight interrogatory with a branding diversion. Expedia as Netflix? There’s a huge difference between sitting on the sofa unwrapping a DVD, or downloading a movie, and the ordeal of airflight and circumnavigating the travel abyss. Talk about oversimplifications.

Carl Sparks , CEO of Travelocity Global, adds his take so:

Sparks – “We see very different browsing and booking profiles (on mobile platforms). One of our key products is Travelocity Top Secret Hotels, where you don’t know (the hotel) you’re (buying). These last-minute deals to get away have been very successful, double-digit percentage (growth). On mobile, it (has grown) three times.”

Okay. It’s clear now. Sparks and some of these other CEOs have been given the opportunity to plug their greatness so many times, they are running on auto-pilot. Top Secret Hotels, we’ll leave that one alone for now, but I tried to search these secrets 4 times over 3 different destinations and could not get out of the error page. Top Secret Hotel bookings is tantamount to the shell game at the county fair for me anyway.

Barney Harford, CEO of Orbitz Worldwide, ventured off into techno-babble as he did on the first question:

Harford – (In) the recommended hotels module we just launched, we (look at) people who shopped for a particular hotel but ended up at (another), finding other hotels that are similar. We want to recognize the attributes of each consumer. For example, our data show that consumers who purchase on a Mac vs. a PC typically book a room that’s $20 more expensive. You can imagine the richness of that kind of information. We put over $145 million (into) a five-year re-platforming project — building a common platform (for) all of our brands. A couple of years ago, we might have launched the site four, five, six times a year. This year, we expect to do over 800 (changes on) the site.

I don’t know Hartford, and I almost feel bad being critical. But “almost” is as far as anyone should go when someone admits analyzing data to figure out if there are computer snobs and brand conscious buyers out there. People who can afford luxurious buy luxurious – brilliant. Look at it this way, Orbitz is studying Mac vs MS trends with money they charged hoteliers and airlines, who in turn charged travelers. Yes, there are people willing to pay commissions to the guy in the middle. More genius.

Is reading these answers reminding you of something? Big governmental waste, bureaucratic BS, political dogma? It is me. Sometimes decision makers sound as if $150,000,000 is chump change, and at the same time bleeding their last drop of blood. Maybe I am becoming a cynic?

The point here is not that these and other OTAs have not adjusted, changed, even improved. It’s that compared with the massive revenues they have (and continue) to take in, hotel owners and consumers have gotten precious little more than William Shatner promised a decade ago. And with far more hidden fees about. I don’t know about you, but I look forward to the CEO that just says; “I agree, we have not changed nearly as much as we might have.” But then, that would require an explanation. The reader is more than smart enough to read past all the rhetoric here.

Ask that at your next profits call. More in Part III.

Lend Me Your iPhone to Test the “Backdrop App” Game Changer
Game-changing AI-powered Travel Innovations
VR Travel Experiences that Shape the Future
A Grain of Salt and H2O Hospitality Gets You 2.5 Star Bliss
Previous: Amazing Luxury Hotels in the Middle East
Next: Top 10 French Ski Resorts