The Telegraph has reported today that chefs and waiters at at The Ledbury, an upmarket restaurant in Notting Hill, had to protect their guests against thugs and rioters armed with bats, with rolling pins, fry baskets, and other kitchen tools. And this is not an isolated incident. The Metropolitan Police released the following advisory:

We would advise members of the public to avoid any unnecessary travel to areas that have been affected by the events of the last couple of days and to keep safe by not putting themselves into vulnerable positions.

It is possible that your journeys to and from work may be affected so think ahead and plan carefully. Stay alert and be aware of what is going on around you.

If you do have any concerns about returning home this evening, you should consider staying with friends or family members outside of the affected areas.

If you need help planning a journey, you can use the ‘Travel Tools‘ on TfL’s website. These include tools to help plan your journey and free mobile travel alerts. 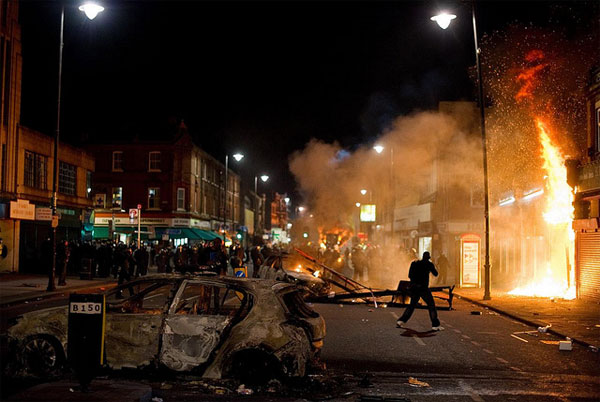 Several theaters canceled their performances on Tuesday, including the Battersea Arts Centre, Greenwich Playhouse and the Arcola Theatre in Dalston; while the Albany in Deptford also tweeted it had been “advised to close by the police,” according to the BBC. The city’s Business Travel Club postponed an event scheduled for Tuesday evening, and the list could go on.

In the light of the events, it is advisable that you cancel, or postpone your visit to London till the riots subside, or at least avoid the affected areas. Below, you can see a map with the verified affected areas from Saturday 6 August until 06:00 Tuesday 9 August, mapped by James Cridland, who found that the media and Twitter are not as reliable as they should be. A continually updated map of verified incidents is being run by The Guardian. 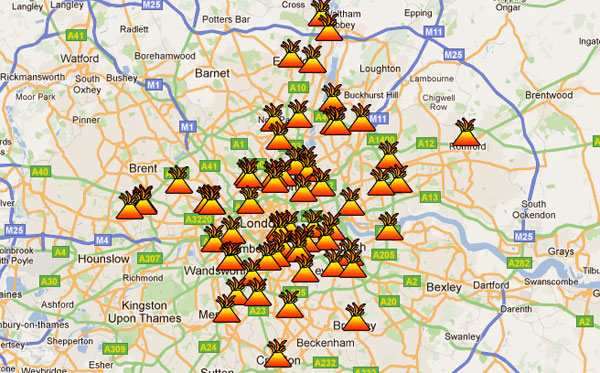 As you see from the map, the affected area is rather broad. VisitBritain has already canceled a marketing campaign because of the riots. The video ad below was running in overseas territories since late July on bbc.com’s BBC World News.

Campspot Publishes the Top Outdoor Travel Trends for 2023
Ideas to Make the Most of Your Visit to Phuket
Trends Say Americans Guarded Over Travel 2022
27 Inspirational Travel Quotes to Fire Up Your 2022 Travel Bug
Previous: Top 5 Last-Chance Summer Deals for Labor Day Weekend
Next: MakeMyTrip Takes on Expedia and the World