Longest Bridge in the World Another China Wonder

In news from China, the longest bridge in the world over water opened yesterday to some fanfare. China’s Jiaozhou Bay Bridge, linking the port city of Qingdao with offshore Island Huangdao, allows traffic to cross the 26 miles of waterway between the two. The added two and one half miles of bridge make this longer than Lake Pontchartrain Causeway, in Louisiana, the former record holder. 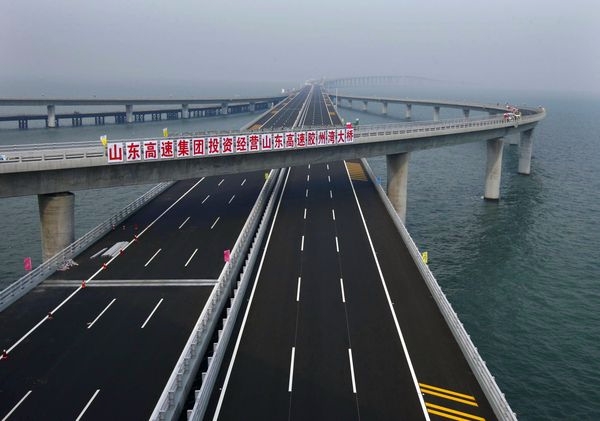 Designed by Shandong Gaosu Group, and at a cost of close to $2 billion (depending on whose numbers one uses), the Jiaozhou Bay Bridge is supposedly supported by more than 5,000 pillars. According to estimates, the bridge is slated to support some 30,000 plus cars per day as well. We found this YouTube video to show you how it might feel to cross such a monstrosity – enjoy.

China, for those who do not already know, is now home to seven of the ten longest bridges in the world. According to rumor, there are also plans to construct an even longer link over water between Guangdong province and Hong Kong. Until then, this latest engineering marvel rides atop the Guinness Book of World Records’ records.

A story in the Telegraph reveals more about the bridge, along with some stunning video so that readers can get a feel for what kind of guts it takes to just cross this span of river bridge. Half an hour over what seems and endless stretch of airborne roadway, is not for everyone.