It’s not easy trying to spot a genuine deal when you’re on the hunt for discounted hotel rooms, but a new Russian startup is hoping to change that. DealAngel, a Moscow-based hotel search engine that helps travelers to get the best possible deal on their lodgings, has just announced plans to make its API available for other sites to use, meaning that we can expect this useful resource to start popping up in a lot more places on the web any time soon.

DealAngel is currently in private beta, and its API will be opened up to developers next April. Currently its API has already been integrated with the travel site Gogobot.com, which plans to launch a calendar highlighting DealAngel’s services.

The hotel search market is an ultra-competitive one, and so DealAngel will need to secure partnerships with an assortment of travel websites if it’s to compete with big-name services like Expedia and Booking.com. However, it does have one crucial advantage over its better known rivals. Whereas the traditional OTAs just use current data to compare hotel prices, DealAngel really does live up to its name. Its engine takes into account historical pricing data, using this and other economic data to predict future price increases that gives travelers a nice reference guide when they’re comparing the various hotel deals they find. Going beyond this, DealAngel then scans the web for hotels offering rates that are lower than what the expected fair price will be, offering its users the best possible deal on their room. The company says that its search algorithms ‘learn’ as time goes by, and so it’s results will get more accurate over time. 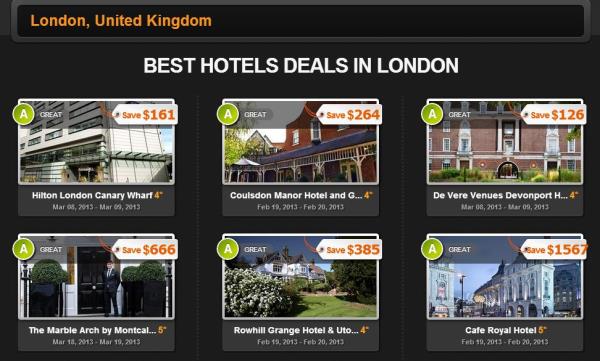 Whether or not this competitive advantage will be enough to give DealAngel the edge over established sites like Expedia remains to be seen, but from a traveler’s perspective it’s always nice to have more options on the table. Next time you’re stuck looking for a cheap room, go give DealAngel a try!