Hotel Prices Fluctuation in Europe for May 2012

With summer just around the corner, European hotels are experiencing a price increase of about eight percent. According to Trivago Hotel Price Index, this May, Finland (157 euros, up 37 percent), Romania (92 euros, up 28 percent) and Sweden (178, up 26 percent) are among the countries with the greatest price increases in Europe. Moreover, Cannes with the International Film Festival on the way, has already increased nightly prices by an average of 30 percent compared to last month. 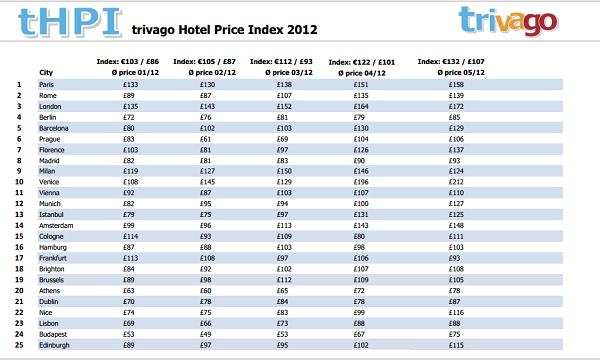 Trivago has prepared its monthly report, showing the greatest price increases and decreases that Europe faces this month.

With the 65th edition of the Cannes Film Festival approaching, the beautiful Mediterranean city on Cote d’Azur is going through one of the greatest price increases in Europe this month. During the festival (16-27 May), the stylish French destination will expect tourists with great accommodations and prices to match. As reported by May tPHI, the average price per night in Cannes will be 172 euros.

With an average price of 192 euros per night, and an increase of 25 percent, Stockholm, the Swedish capital, seems to be one of the most expensive destinations in Europe this May, alongside Cannes and Finland (157 euros, up 37 percent).

Regarding the best European value cities to visit this May, Malaga, with an average hotel price of 79 euros, is recording an important decrease (annual decrease- 8 percent, monthly decrease – 16 percent), alongside Athens (96 euros, 16 percent down), Toulouse (91 euros, 4 percent down) and Seville (111 euros). The lovely capital of Andalucía is one of the most affordable cities in Europe, with the greatest price decrease of this month – 23 percent and 18 percent lower compared to last year.

Campspot Publishes the Top Outdoor Travel Trends for 2023
Ideas to Make the Most of Your Visit to Phuket
Trends Say Americans Guarded Over Travel 2022
27 Inspirational Travel Quotes to Fire Up Your 2022 Travel Bug
Previous: Four New Alternative Venues to Get Married in Paphos
Next: Oceania Cruises’ Riviera Christened in Barcelona