Greece strikes against austerity, a 48-hour general protest across all sectors, that impacts the country public transport infrastructure, schools, banks, government offices and even hospitals (which only accept emergencies). 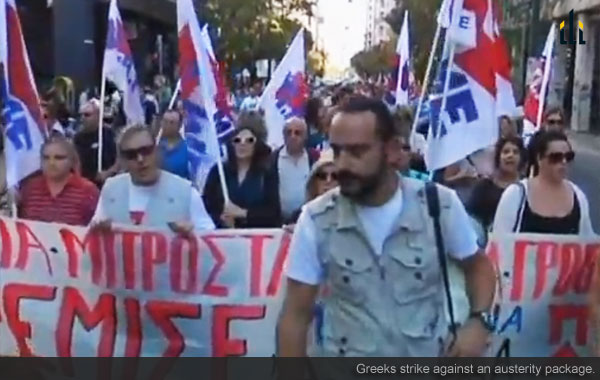 The strike was called by Greece’s two biggest labour unions, backed by the leftist opposition, to protest against an austerity package proposed by the coalition government. The package aims to unlock a loan tranche of more than 31 billion euros from a European Union/International Monetary Fund bailout. The Greek Parliament is scheduled to vote Wednesday, but the unions feel that the measures will hit the poor and spare the wealthy. They hope to determine the lawmakers to vote against this austerity package:

“If lawmakers vote in favor of the measures… they will have committed the biggest ever political and social crime against the country and the people,” said Nikos Kioutsoukis, secretary general of the private umbrella union GSEE, cited by Reuters. “We won’t let them destroy the country.”

Greeks seem determined to continue their protests till they see results.

“We don’t want to continue living the miserable life we have lived for two years,” said Nani Politou, a secretary at a public utility. “These measures must not be approved, we must stop them because this will sink us more.”

So far, the strike paralyzed public traffic, with bus and taxi drivers walking off the job. There were no trams or trains working either. Even air traffic was disrupted yesterday after air traffic controllers held a three-hour strike. No ferry services work.

What you must know is that Greeks are determined people, and that they will not stop protesting after the government votes, especially if the measures pass. You are advised not to travel to Greece at this time.