Footprints Discovered at Trachilos, Crete Date from 5.7 Million Years Ago

Scientists say the footprints may be either ancient humans or a new mystery primate.

Dr. Per Ahlberg and a team of scientists from Uppsala University in Sweden have identified fossilized humanoid footprints in a small area near Trachilos, Crete. Fossil footprints in a track laid down almost 6 million years ago suggest a humanoid or previously unknown primate presence on the Aegean island. The scientists say the animal or ancient human responsible for the prints was probably claw-less and bipedal, walked on the soles of its feet, and had other hominin-like characteristics.

The authors of the report on the find say that the interpretation of these footprints as belonging to a hominin is controversial because Crete is some distance from all other sites where hominins of a similar age have been found, in Chad, Ethiopia and Kenya. However, the scientists say that the Trachilos prints may even belong to some unknown non-hominin primate that evolved a human-like foot independently. The footprints are small tracks made by someone walking upright on two legs – there are 29 of them in total ranging in size from 94mm to 223mm.

The Trachilos footprints were first discovered by Gerard Gierlinski, who was the first author of the study. The scientist found the tracks by chance when he was on holiday in Crete in 2002. Gierlinski, who is a paleontologist at the Polish Geological Institute specialized in footprints, identified the footprints as mammal but did not interpret them further at the time.

The complete research, published in the Proceedings of the Geologist Association, is also controversial because as it suggests that the earliest human ancestors may have wandered around southern Europe as well as East Africa during geological time interval known as the Miocene. This latest discovery comes on the heels of another study 7 million-year-old Greek and Bulgarian fossil teeth from a hominin ape dubbed “El Graeco”. This is the oldest fossil of a human-like ape outside Africa. That discovery turns up-side-down previous ideas about where the cradle of humanity may be. However, conservative scientists say the presence of Miocene hominids in Europe and Africa simply shows that both continents are possible “homelands” for the group. 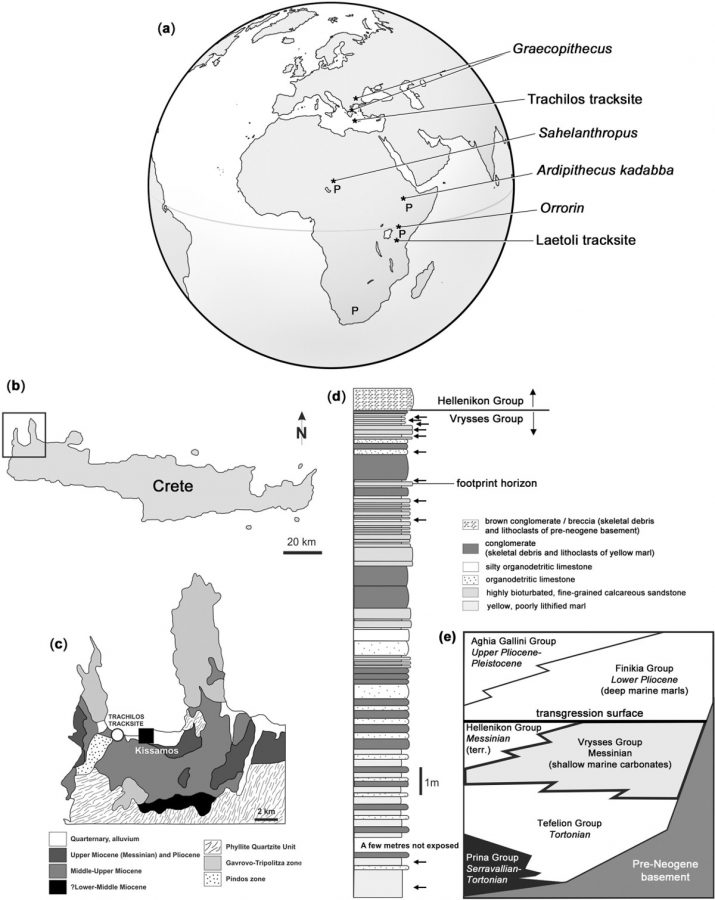 Fig. 1. Location and stratigraphy. (a) Globe showing the locations of the Trachilos and Laetoli tracksites, along with localities of named Miocene taxa interpreted as hominins in the recent literature. The letter P indicates regions (not individual localities) that yield Pliocene hominin fossils. (b) Map of Crete showing region of Trachilos trackway locality in box. (c) Enlargement of area in box showing regional geology (from Freudenthal, 1969, van Hinsbergen and Meulenkamp, 2006) and location of trackway locality. (d) Stratigraphic column through trackway locality, showing levels sampled for foraminifera (small arrows) and the overlying contact with the Hellenikon Group representing the desiccation event of the Messinian Salinity Crisis. (e) Schematic representation of the geology of western Crete, from van Hinsbergen and Meulenkamp (2006). – Courtesy Gerard D.Gierliński

Finally, there are examples throughout the fossil record of what is called “convergent evolution,” which involves two unrelated animals developing similar anatomical features as adaptations to a particular lifestyle. The Trachilos footprints do not suggest such a convergent theory though. It is now the mission of scientists to unearth more tracks or, better still, body fossils that will help us to better understand this interesting period of primate diversity.

This discovery brings to mind a previous Argophilia story that called to question the very early history of the island of Crete. “And the Gods Favor Crete” was a speculative piece that referenced the brilliant scholar Immanuel Velikovsky, and his controversial work “Reconstruction of Ancient History and Cosmos Without Gravitation.”