Euros Left in the Vapor Trail: Plight of the Single European Sky

With 27 separate bits of airspace connecting European countries, is it any wonder the the  old continent still seems fragmented and inefficient? Well, back in 1999 the European Commission launched a plan termed Single European Sky (SES), aimed at uniting all the airspace to fuel a more efficient air travel industry. The big question today it; “What happened to the plan?” 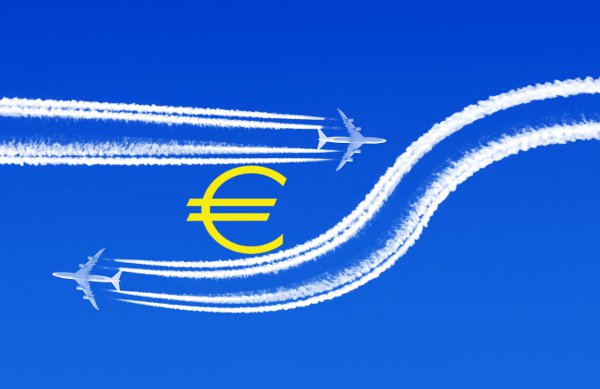 With fuel costs, airline efficiency and solvency, and environmental concerns more pressing now than ever, Europe airspace regulations and fragmented controlling bodies, spells mockery for any sort of cohesive transportation effort over Europe. Air travel in and across Europe, put simply, is a maze of separate regulations and controlling bureaucracy.  Airspace is one of the areas in which real economical improvements can fairly simply be made, but SES seems as far away as a reality today as it was before 1999.

Imagine the excess costs to airlines having to stay aloft or fly circuitous routes in order to negotiate all those imaginary borders aloft! Safety, fuel efficiency, and on the ground excess are the result when airspace is chopped up so. With airplanes responsible for a growing percentage of greenhouse gases too, it’s easy to see why some negotiating needs doing among the European community.

The Commission has made incremental steps toward SES over the past decade, to be sure, but the latest regulatory moves in 2008 were planned for implementation as far out as 2025. By that time air-traffic will have more than doubled over Europe, and costs and inefficiencies will be multiplied along with the environmental impacts.

To address these issues, the Commission launched an initiative, in 1999, aimed at creating a ‘Single European Sky’ (SES) by reforming the current Air Traffic Management system. A series of regulations was adopted in March 2004 with a view to implementation by 2025. But, conceding that these regulations had “not delivered the expected results in some important areas,” the Commission, in June 2008, put forward a second package of legislation.

Those regulations are highlighted in this article at EurActiv ended up being another money spending initiative called the Clean Sky Joint Technology Initiative, a legislative payout in some people’s estimation. In the end €1.6 billion euro is the price tag for “researching and developing environmentally sound tech for airplanes. Just what is wrong with 27 countries agreeing to let planes from one another fly unabated across the continent though? Somehow it always seems simpler to spend more money for politicians than to simply sign a piece of paper.

Back when the 2008 revamp of talks came about, then European Transport Commissioner, Antonio Tajani (at left), ridiculed the spider web of flight paths crosscutting Europe as more than ridiculous. An aside on Tajani here reveals the now Commissioner for Industry and Entrepreneurship as the then consumer and passenger advocate who to the so-called Communitarian regulations regarding the defense of the rights of passengers passed.

Tajani is now focused more on entrepreneurship and overall transport efficiency, but perhaps his expertise is required to push forward cementing reasonable airspace regulations now? Between the complicated network of languages, cultures,  governments and their policies have always been a problem for the EU. Now, perhaps more than ever, for EU systems to survive at all, these sorts of collaborations and collective rule-making seem fundamental.

As for what is happening with the original Single European Sky initiative, there’s any number of offshoots of the legislation making waves. Cleansky.eu, the cemented technological research entity we spoke of previously, this focused on aeronotical technical advancement to solve the sustainability problems of air traffic over Europe.

On the grass roots and commission end of the movement, Skyway Magazine launched in February of this year, and the most recent news tells of Eurocontrol’s efforts at interlinking Europe systems and agencies, but the site shows more traffic and metrics reporting than significant progress. Their Network Operatons Report – March 2013, shows the data gathering and reporting capability of the group.

Finally, while big name aeronautical companies and airlines cut the cost (50-50 cost share with commission funding) of making more efficient airplanes, airplanes that eventually earn your flight euros and dollars, the circuitous flight vectoring that wasted billions in fuel and other costs goes on. I leave you with video form EUROCONTROL TV.