With 2011 just around the corner Argophilia Travel News is looking at just which countries in Eastern Europe engage the world best digitally. As online brands themselves, and being sometimes the only contact portals foreigners have to connect with, country websites, Facebook, Twitter, and other digital mediums play a crucial role in the future of so many.

Over the next several weeks we will spotlight any and all digital platforms countries in this region operate. Today we take a look at Lithuania’s digital footprint, at first glance certainly a contender for Eastern European digital champion in our book. The screenshot below shows clearly the cutting edge design and utility of this, one of the best we have seen on the web, national info platform. Let’s take a closer look, shall we? 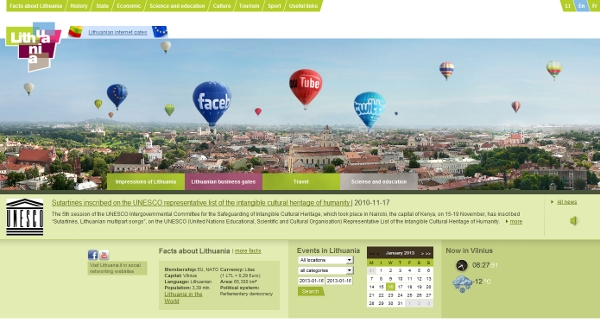 Minimalism Does Not Mean Less

Landings, the most crucial aspect of any website, national or otherwise, is the landing page. Aside a bit of slowness due to some flash rendering, Lithuania’s first page is striking to say the least. All above the fold (no scrolling) and aesthetically beautiful, this website puts all the buttons and sections within short click range of the visitor – when you go there pay attention to the feeling everything you could want to know is right in front of you. The long and short of this is, the UI and navigation are nearly perfect here. The design by Kryptis is stunning.

From the minimalist top navigation to the stunning motion graphic depicting Lithuania, one of Europe’s most forward thinking republics has thought ahead on their web brand too. If there ever were a sight that said “We are digtial,” then this is the poster child. Facebook, YouTube, and Twitter account buttons are actually clickable balloons up front and unmistakable.

News is and information is the flavor of Lithuania online too, and what’s more striking is how the designers managed to put all these clickable items in view without appearing cluttered. And the buttons lead to digital engagement as well, not simple broadcasting. But, Lithuania’s Facebook only has 800 or so pals, and the conversation there appears to have ended for some reason? 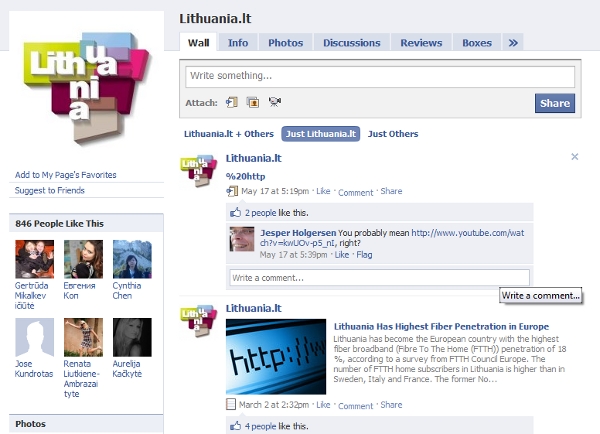 As you can see Lithuania did it right, but dropped the ball

Commitment – The Achilles Heel of All Social Engagement

Despite Lithuania’s extraordinary efforts in putting all the perfect tools in place, heading over the Twitter reveals a chink in the country’s digital armor – Twitter is dead. 228 followers of this wonderful country cannot even get a broadcast these days. The last Tweet by Lithuania was in May of 2009. In fact, it appears all 22 Tweets were done during that month, almost as if someone played with the account and then waved bye-bye?

Well, no one in all my online travels has so far asserted themselves with a perfect digital brand creation. Lithuania’s web portal is pretty close to perfect for what the country needs online though. Where travel is concerned, a middle navigation button takes the user over to the official Lithuania travel site – not too unlike the main site actually. Likewise a click of the Lithuanian Business tab transports those interested to the investment profile of the country. Then there are Science and Education, and the less than useful (update here – the flash would not load – but section has interesting personal stories – excellent element)  Impressions of Lithuania section. 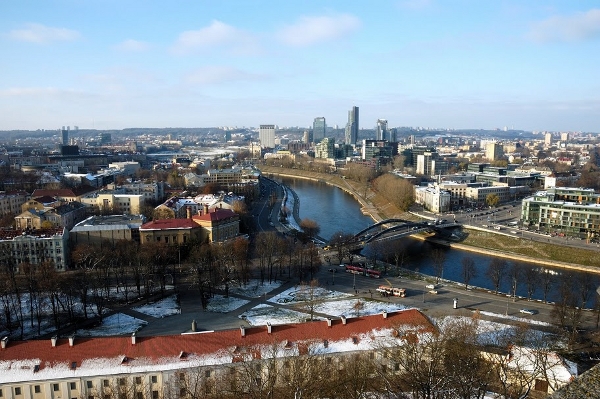 As happy as I was to scan Lithuania’s fantastic portal and other social tools, I am sad to have to diminish the country’s efforts by reporting the all too familiar “lip service” technique for going digital. Despite wonderful design work, and having all the right ideas and tools in the right places, Lithuania left the “conversation” for some reason? As my friend and social media guru Brian Solis suggests, “engagement and continual participation” are essential. Lithuania engaged perfectly but walked away? Brian’s definition of social media reveals a huge mistake if Lithuania will ever truly be a part of the digital conversation:

“Social Media is, at its most basic sense, a shift in how people discover, read, and share news and information and content. It’s a fusion of sociology and technology, transforming monologue (one to many) into dialog (many to many.)”

For all the forward thinking and economic dynamics of Lithuania, online there is no one speaking or listening now, at least as far as we can see. In conclusion, we present Lithuania as the first competitor for Eastern Europe’s most digitally aware national presence. Your input, and the expert input of some of Web 2.0’s celebrities, will help determine the top digital presence for 2010. This writer’s score for Lithuania will appear when we examine our next entry.

Stay tuned for more information on this, as well as your input methods. For now though, we leave you with the video below from Lithuania’s YouTube Channel is indicative of just how committed this Baltic country could be 21st Century engaged.