Day Four of Five in Athens: Life is A Prayer

Two days of the Digi.travel EMEA Conference & Expo in Athens delivered their business promise to those who attended, and to those of us presenting. Friends and colleagues, old and new, were ready to embark along their separate paths, but for us exploring the streets of Plaka, and listening to the echoes of eternity, the message was in the stars. Here’s a glimpse at what an ideal business trip should be.

Breakfast at Airotel Stratos Vassilikos  meant a fond farewell to all of our friends Tom Magnuson, Tomasz Janczak, and the irrepressible Henri Roelings. Paul Jules, having taken a shine to Tom and Henri already, still held on to his new pal “Bond” – aka “Uncle Tom” – flying out that morning. Tom’s departure made him a touch sad. There’s an old saying in America, “kids and dogs can tell you…” – so I guess the reader knows three more good fellows. Departures aside, our chance to explore one of the world’s greatest cities lay ahead.

The taxis in Athens are dirt cheap! Well, everything in Athens is cheap when compared to Germany, where a decent office chair costs €500 euro. Our pal George Kanellopoulos, the Groom at our hotel, hailed us a taxi to Plaka, the chic pedestrian neighborhood beneath the Acropolis. Touristy, for sure, there is no denying the genuine appeal of this central neighborhood. And like genuine idiot Americans we stopped at the first souvenir shop we came to. With the specific purpose of being as typically idiotic as your dumbest travelers. 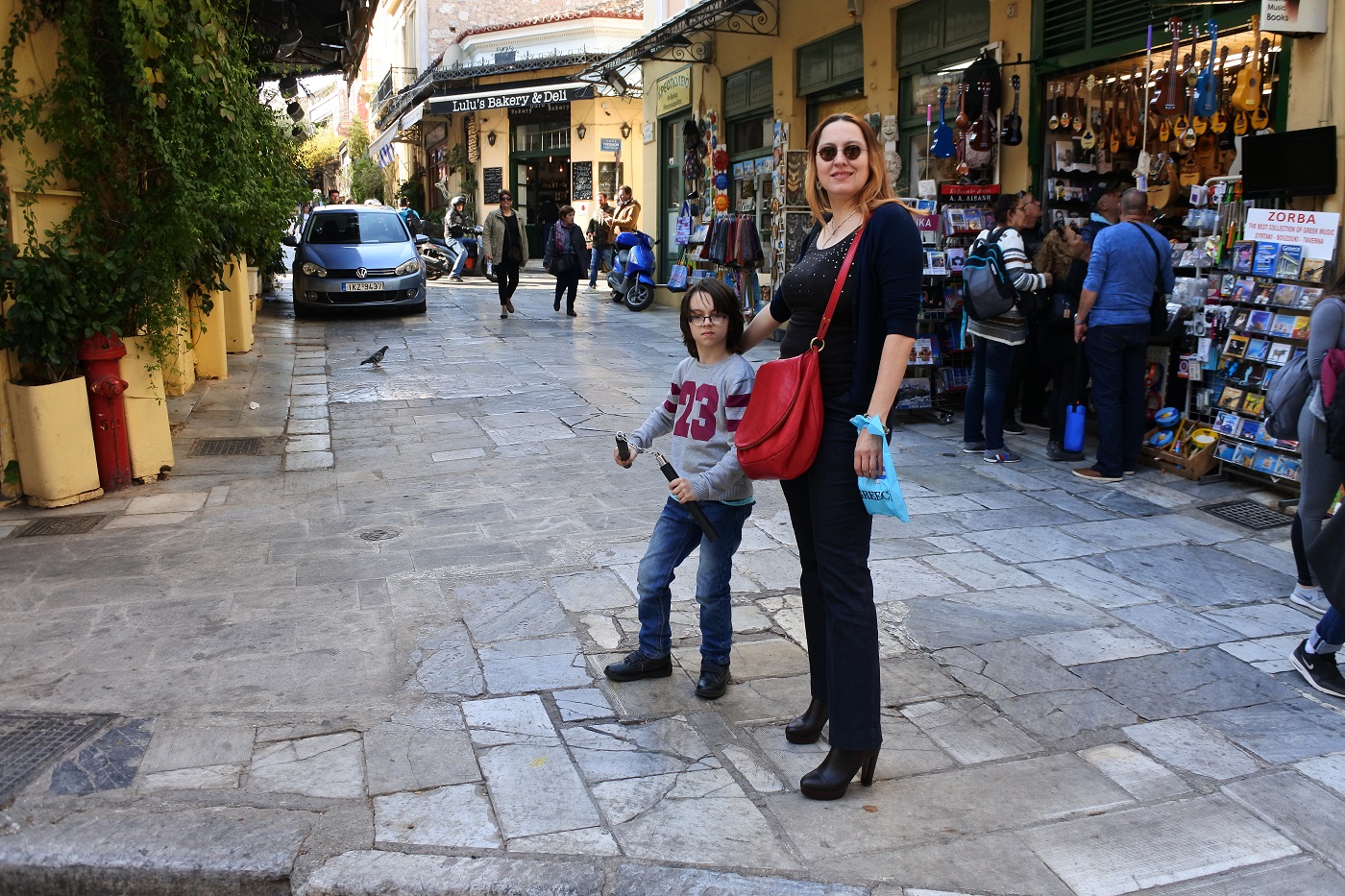 Paul Jules had been so grown up and patient during the conference we just had to buy him something as a reward. True to form he spotted a shop called the Ibescus Market full of medieval weapons and miniature soldiers, Spartans to the Knights of Arthur and beyond, we managed to escape relatively unscathed having only forked over €20 for some “nunchaku” (foam ones above – thank God).

Mihaela had forgotten her casual shoes for the trip, and was nearly hobbled by the rough stones of Athens streets meeting the 8″ heels of her John Galliano boots (on sale). Rather than rigging a litter to carry her on, we decided buying a pair of sneakers or sandals might be a good idea. But first, of course, the Kostis jewelry shop (Facebook) on the way to the shoe store beckoned (Mig). After some prodding (she is notoriously frugal) me and the sweet girls (below) at the shop made the sale(s). 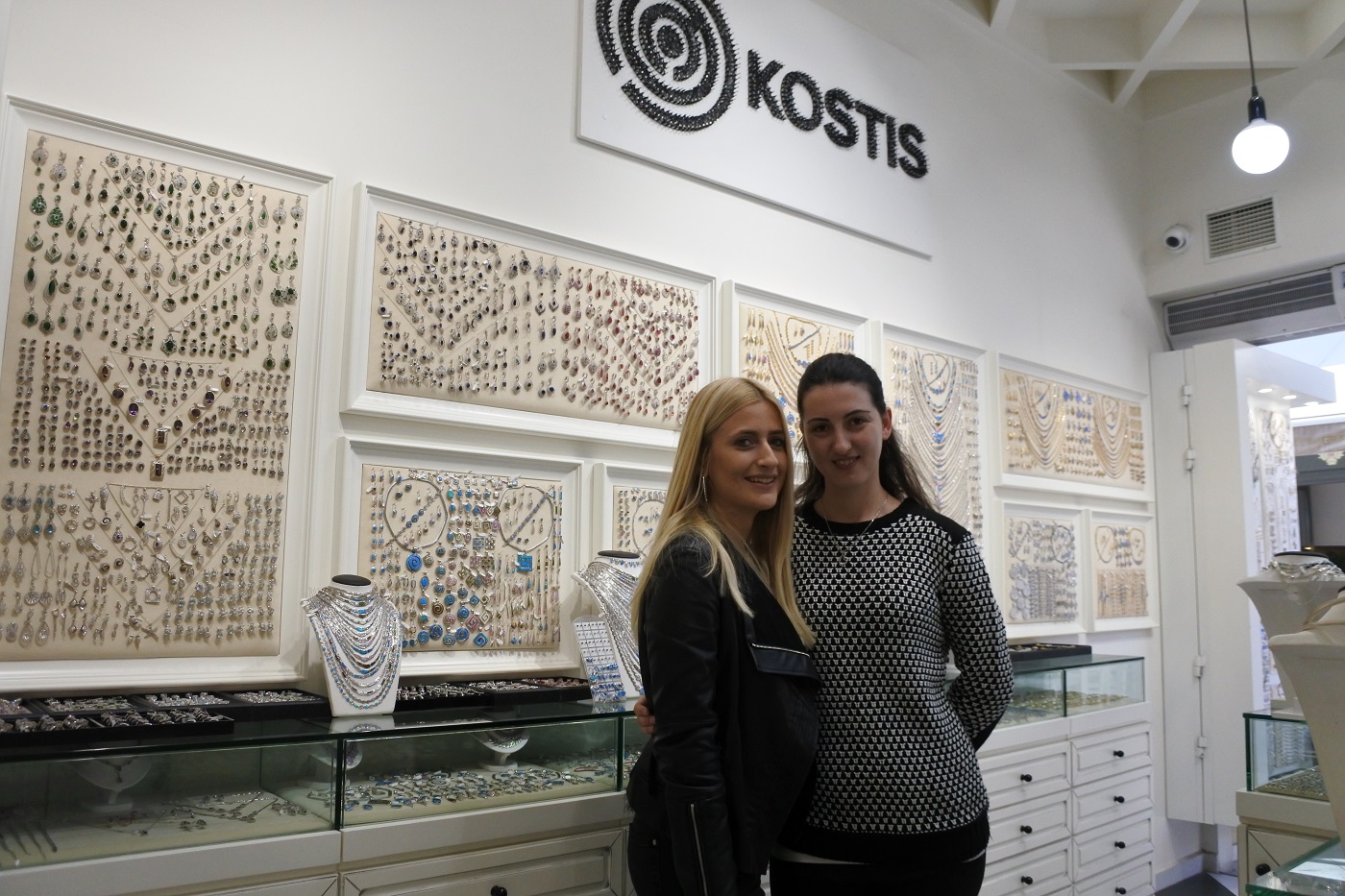 I cannot give enough praise to these two sales ladies, Paul fell deeply in love.

Finally we managed to drag little Paul away from the pretty girls at the jewelry shop, and continued our quest for comfortable shoes. At Kouros Fashion and Gifts we met the nicest shop owner, a sweet lady named Maria, who has not only provided Mig with a cute pair of red Celdes sneakers, but she also introduced Paul to the prettiest canary (Fifi) I’ve ever saw. 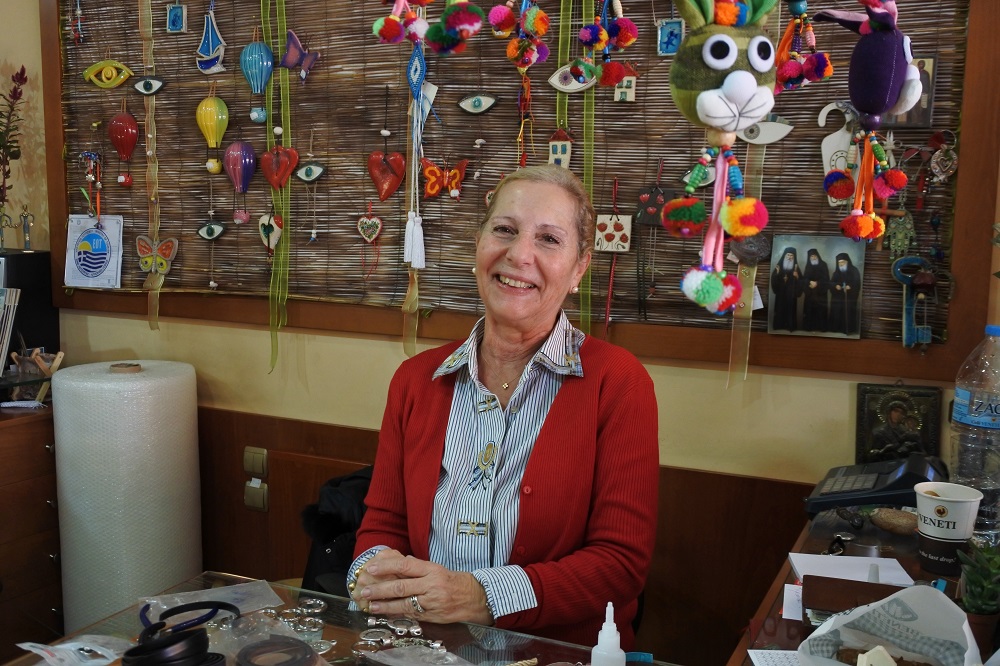 The owner of Kouros Gifts in Plaka

With dead smartphones and camera we hunted desperately to find a cafe where we could recharge ourselves and our devices. Luckily a family owner restaurant called Erato, which was across the street from the jewelry store we stopped at previously. As per usual, the food was great-Greek, and the owner and I took the opportunity to plan the next Greek revolution too. Recharged, re-inspired, we headed uphill to the magnificent Acropolis. 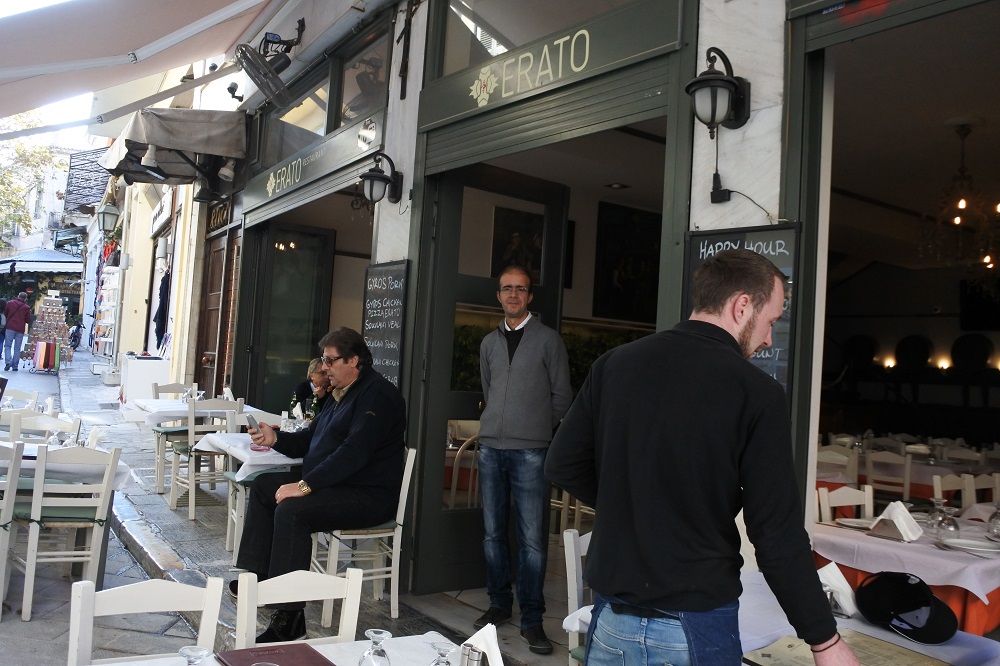 With the right shoes on the wife, the son placated with a new toy, and a new mission in sight, we headed up, up, up the hard way to the Parthenon. As fate would have it, apparently my revolution discussion with the Erato owner must have been eavesdropped, because RT TV called me to go live from their studios in Athens just then. The sideways look from Mig and I postponed until after visiting the gods. 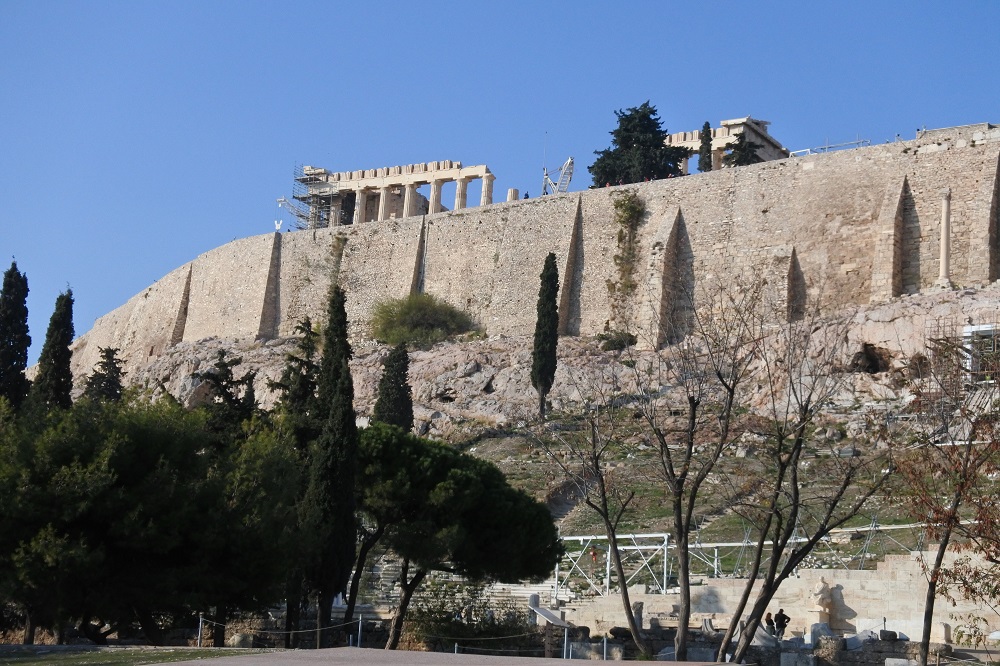 The Acropolis from the Plaka side.

Halfway up the steep pathways we took a short break to talk with two nice Japanese tourists. Moments later Paul Jules decided to speed ahead, and to scare us to death by getting momentarily lost. The image below is a bit of a “Eureaka!” moment, with all three of us at the top finally. 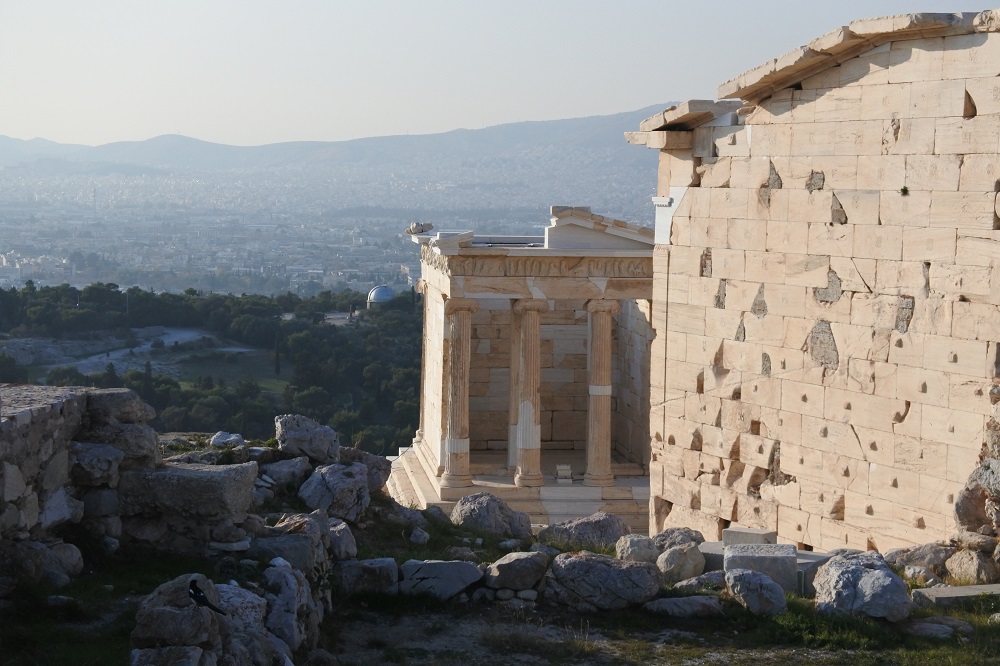 The magic that is the Acropolis.

It is impossible to describe the feelings that surround this place. My friend Tom Magnuson went earlier in the week with his wife Melissa, and reflected how the Acropolis forces one into a mental “reset.” My little boy Paul, on the way up the hill, proclaimed that “they are watching us,” meaning the spirits of the Parthenon. Again, “children and dogs.” RT TV calling again, we had to speed down the to the city to find the studio. Not before little Paul knelt down to pray, believe it or not. Holding his little arms aloft (feature image), like something from  period movie, onlookers marveled at the creativity and unimpeded sweetness.

Mihaela at the Acropolis toward sunset. This was a day of much magic. ❤️❤️❤️❤️ #Athens #Greece #Acropolis #Parthenon

More search adventures awaited us when the taxi driver at the entrance to the Acropolis told us we did not need a ride to get to the TV studio. Right down the hill Athens’ busiest business district contained all the normal suspects PLUS DigiCam TV.

Timing is everything, they say, and so it was this day was as full as can be imagined. Demonstrations in the center of Athens over more austerity measures coincided perfectly with my RT interview over the costs and implications of the proposed “EU Army” etc. Once Rory Suchet was done with me, it was time to head to dinner with a wonderful newfound friend, Yianna Daskalopoulou, who we met through her PR job at Stratos Vassilikos Hotel. Like I always say, the real treasures of any country are always people. 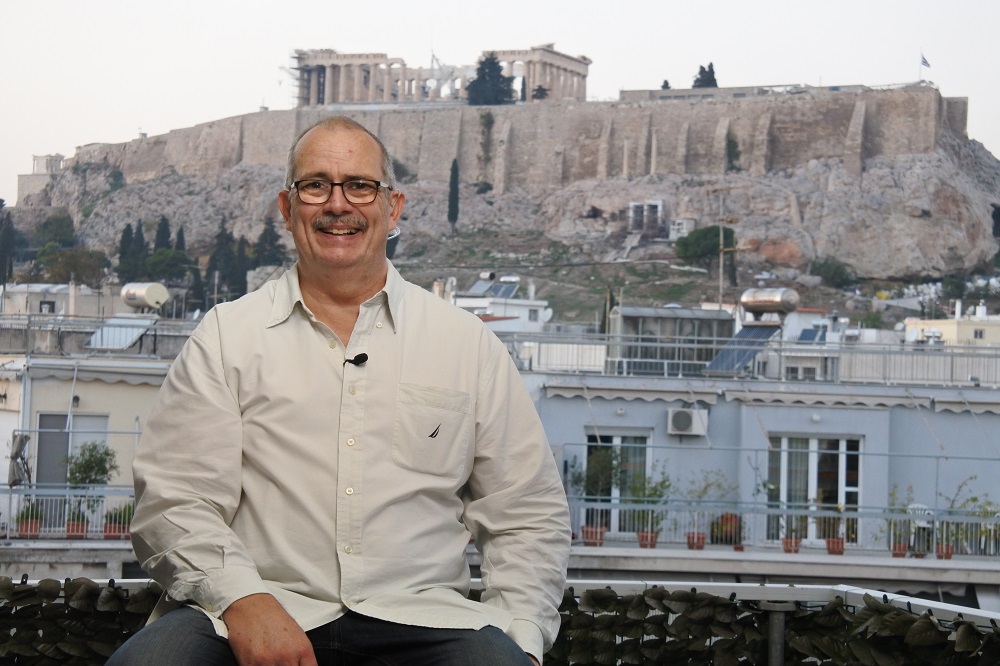 Mic-ed up and ready to go at the studio – life never ceases to amaze.

Another cheap taxi ride and we jumped into dinner mode, headed to the seaside and Yianna’s neighborhood in the suburbs. The AIROTEL guest relations manager showed us the real character of Athens and of Greece, humbly suggesting we eat either a place by the seaside, or at a place where the locals eat, laugh, and play. Choosing the latter, I think we actually surprised her a bit. The die being cast, we sat down to the best lamb chops and the most enthralling “getting acquainted” session I can remember. Paul Jules and I picked lemons and oranges from the trees outside, while Mihaela and Yianna became sisters. Magic is the only word that describes this experience. 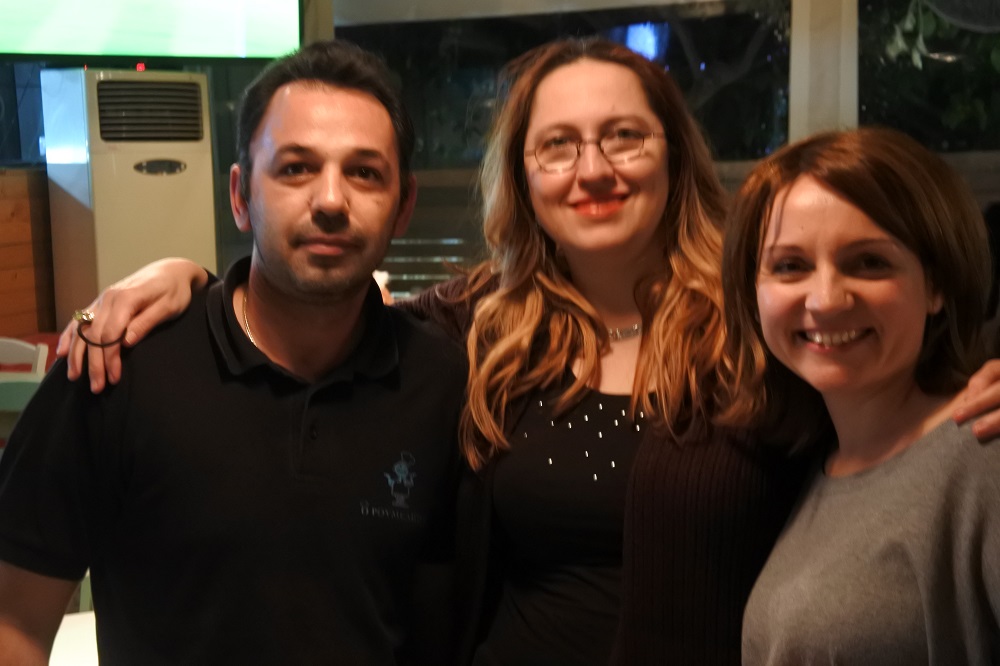 The tavern owner, Mihaela, and Yianna, and me behind the camera.

Late-thirty and everyone is wiped out. Another cab ride to the hotel and the day catches up. Paul Jules drops straight off to sleep, while Mig and I grab one more day’s end on the terrace overlooking sleepy Athens’ balconies. Drifting with the mind’s eye, I wonder at all the souls who have lived or visited this spot of land. Then as sleep takes me I recall a child’s prayer and the “reset” my friend mentioned.

Athens is all about pleasure, no matter how important your business is.