India web products startup Ciafo launches Travelomy, a travel and tourism guide dedicated to South Asia and Web 2.0. With live edit of attractions though, the developers may end up with “Travelohdear” if they are not careful.

Update: The Co-Founder at Ciafo, came to comment that Travelomy uses something called “passive management” to prevent the kind of abuses I mentioned in this article. In this particular case, a very appropriate textual discription smippet was removed as if it were foul language or inappropriate text? Of interest perhaps too, the original snippet I replaced (excerpt below) is not really correct English.

Macchi Bhawan or Fish House is a garden courtyard that lies below the Diwan-i-Khas and surrounded by a two storey structure.

Several things are rather obvious here. First, as you can see, there are a couple of grammatical errors in the above. Second, the use of storey, versus story, illustrates that the author is using UK English, rather than American – significant only if we take the common errors into account – bottom line.. the passage above is wrong. I add a correction below.

Macchi Bhawan, or Fish House, is a garden courtyard that lies beneath the Diwan-i-Khas,  and is surrounded by a two story (or storey if you are selling to the UK) structure.

In any event, passive filters in place or not, Travelomy is onto something in my view. My advice is to get some cracker jack content editors in place though.

According to the press from Ciafo, a new startup arm of their operations has been launched to cover niche travel in South Asia. 5 countries with roughly 5,000 attractions across India, Nepal, Bhutan, Maldives, and Sri Lanka, offer targeted info for travelers. Argo Travel News tests this little South Asia travel guide that can, or may that is. 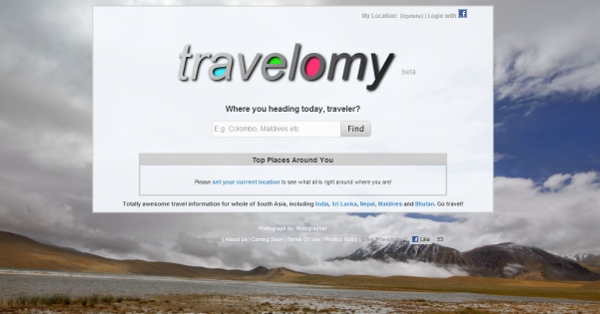 Greetings from the landing of Travelomy bring back memories of such wondrous travel ingenuity as TripSay, all be it not so refined.  As you can see looking at the landing below, the developers were not exactly interested in reinventing the wheel of travel websites. But, this is not to say the service is not useful. Drilling down (exploring deeper) into the site, good information, images, and video are resident – and more importantly, well placed for a regional site. 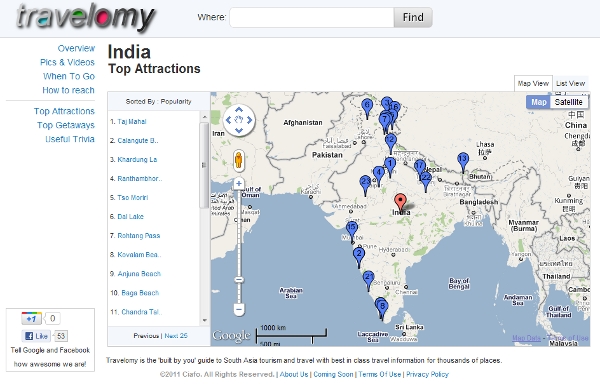 Deeper inside the travel portal, YouTube video and images, not to mention “better” uses of Google Maps, are available for potential tourists to garner information. But here is where Travelomy loses gas. If the visitor (review critic) looks at the attraction Machchhi Bhawan, for instance, the incompleteness and disjointedness of the site becomes apparent. I am not a huge fan of launching incomplete or buggy tools myself. AND! The imminent Wikipedia type edit-ability of Travelomy is a disaster waiting for an opportunity. It looks like I can just input whatever I want and BINGO! the Travelomy community has to live with it.

While the need for regional travel portals is imminently clear to us here at Argophilia (we are after all building one), drafting and releasing a PRWeb press release to the world, before a certain level of completeness is achieved, is not good PR. I will say that the developers have announced too, their rather “freewheeling” user generated content goal – or apparent one. The news does speak of editing on the fly. The image below shows my own edit gone live. Of course we do provide content for the best on the web, Stay dot com (among others), so I would not expect cutting edge venue descriptions abounding in general. 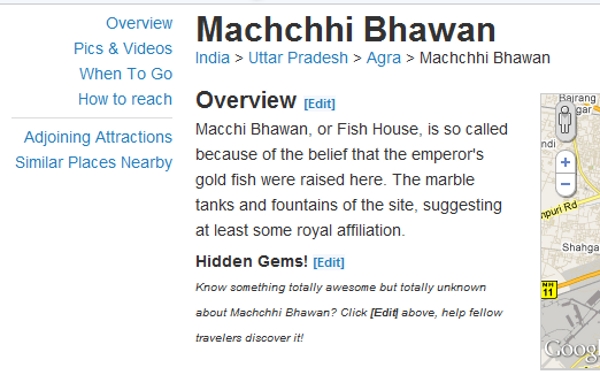 As you can see, I live edited their text - but then we are content providers for the best

For more information about Bangalore’s Ciafo, or coming features for their Travelomy portal, you might want to visit their corporate website as well.  Their Locappa mobile app, upcoming, seems most interesting of all. As for Travelomy? We’ll have to see where this unfettered editing leads and what added value the developers can throw at it. More later on this.