Where to Find the Best Travel Deals – Whodathunkit?

And then you are delivered to the tropics? Besttraveldeals blog is much prettier than the parent site.

Besttraveldeals.net is a community where travel lovers from all over the world can meet, share and explore travel. The platform is designed to show the best deals on everything from exotic beach resorts in America to ski lodges in Europe. This kind of human powered recommendation engine has great potential – if the community gets there.

The differentiation point here from traditional travel deal sites is that the deals are created by the community of members. The community decides which deals are the ‘hottest’ or most desired, which deals are ‘wasting space’ — while the engine of the website is loaded from the conversations and interests derived from all of those comments. Here is the simple explanation: Besttraveldeals is a community of coupon clipping travelers, the more you interact, the better the deals! 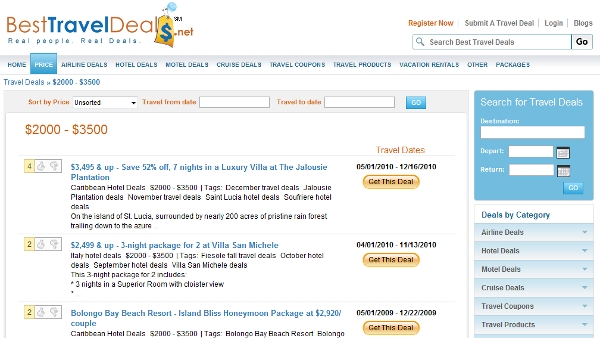 The landing - not exactly rocket science is it?

The UI (user interface) is clean, if somewhat cluttered and Web 1.0. Actually, the usability here is not so bad even without cutting edge innovation – after all we are just searching deals. Soft colors, predominant buttons, and the key interests are focused front and center. The menu bar across the top of the screen is extremely helpful breaking down everything into: Price, Airline Deals, Hotel Deals, Motel Deals, Cruise Deals, Travel Coupons, Vacation Rentals, Other and Packages.

A logical and effective call to action – an email notifier – allows users to get deals sent via mail. There’s also a twitter stream pulled in, showing an advanced stage of social networking awareness. But in all honesty the site is a bit too commercial and high pressure for my taste somehow. Any way.

The Twitter element - a show of social media awareness at least

The blog news is also featured on the landing page, or the five most recent at least. The problem here is that when you click a link, it takes you to a page that feels like a completely different website – so much for home sweet community. The image of the blog at bottom shows what I mean about the site’s “transportive” blog element. One gets the feeling one has been beamed to Condé Nast Traveler or something.  Here is the breakdown of “pro’s and con’s” for Bestraveldeals.

Overall, this is a solid website and business model. Revenue is likely generated from its cut on the pricing, which for such a small group has to be a modest yearly total. There are a few links, the FAQ for example, that are current serving up error messages, which either means there was a hiccup in the server on its end, or its code that simply has not been updated or fixed. As a last little critical note, visiting the Besttraveldeals Twitter profile shows a one way conversation there for the most part. Broadcasting deals via Twitter and email is not exactly Brian Solis type Engage behavior.

The community is small, however there are a few nice deals to be had. However, and unfortunately for Besttraveldeals.net, there is not much to differentiate it from any of the bigger competitors. I would classify this is a solid niche business offering – with not much place to go without some added utility or value. 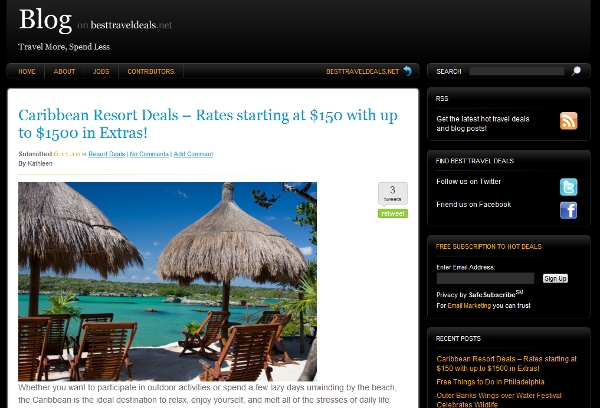