15 Colossal Sculptures Made from Ocean Trash

Some ocean’s trash is an artist’s treasure, and the exhibition at the Marine Mammal Center in Sausalito, California is the perfect proof. The Washed Ashore: Plastics, Sea Life and Art exhibitions will debut June 25, 2011 and keep open through October 15, 2011. There are 15 colossal sculptures on display, throughout the hospital and visitor center. The opening ceremony on June 25 begins at 9 a.m. and the exhibit officially opens to the public starting at 10 a.m. 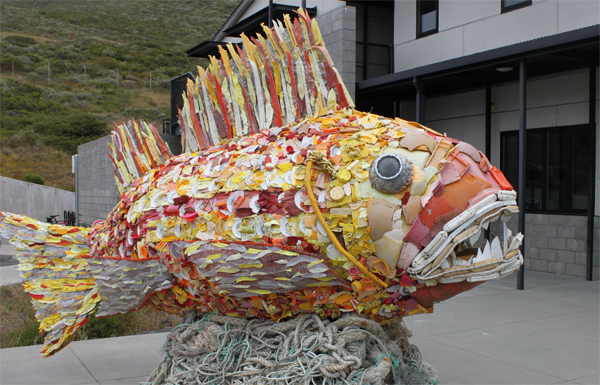 Trash is the main material for the other 14 colossal sculptures. Washed Ashore: Plastics, Sea Life and Art is a community project led by Angela Haseltine Pozzi, a project that turned the ugly reality of ocean trash into beautiful sculptures of the marine life. The project was carried at the Artula Institute, and took approximately 7,000 lbs. of trash from 20 miles of beaches along the Oregon coast to complete.

Citizens from the Oregon coast, young and old, participated to complete this ambitious message, cleaning and sorting ocean trash, including plastic caps, bottles, netting, flip flops and other items found on the beach. They hoped that, by collecting ocean trash and transforming it into art, they will send a clear message to future generations, to prevent pollution of the seas.

“We think this exhibit will engage our visitors with the ‘pretty ugly truth’ about ocean trash and help them make the connection between their health, the health of our oceans and how their actions have an impact on both,” said Dr. Jeff Boehm, executive director at The Marine Mammal Center. “On average, 8-10% of our patient admissions are due to human interactions including those related to entanglements in trash.”

The exhibition is free to visit. For those who cannot come, one of the sculpture pieces, a harbor seal, will carry the message in a variety of locations throughout the Bay Area during the four-month-long show. Below, the “making of” of the Washed Ashore Project: