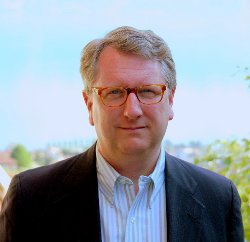 Argo takes a look at the making of a future look back at how the hotel industry “changed” from today. For those of you confused already, read this interview with award winning author Woody Wade about his upcoming collaboration with Hsyndicate for 2016, the download magazine Hotel Yearbook 2036 (download here).

As a hotelier, wouldn’t it be fabulous to be able to predict the future? In the all-too competitive world of hospitality and travel, any kind of edge on the business next door can be significant. I’ve often wished I had a time machine to go back and correct some marketing or PR mistake from the past. So this is how I first became interested in the new theme of this year’s downloadable edition of The Hotel Yearbook, an annual publication that for ten years has been taking a look at what is in store for the year ahead. Here’s the Q & A we had with Woody.

Argo: Woody, can you summarize what the Hotel Yearbook 2036 is about?

Woody Wade: Instead of looking at next year, as past editions of the Hotel yearbook have done, this year’s edition illustrates what it will be like to work in the hotel industry 20 years in the future.  But it’s not the typical futurology book.  Most books about the future are full of grand predictions about the amazing world awaiting us, full of technological wonders and fantastic lifestyles we can only dream about.  Science fiction, in other words.  What I have done is to write from the vantage point of 20 years in the future and let a number of fictitious people from the year 2036 explain, in their own words, how we got there.

Argo: So, it’s a look at the future as if it had already happened?

Woody Wade: That’s right. It’s the year 2036, and everything is seen and described through the eyes of eyewitnesses living and working in the future.  Some of these commentators are movers and shakers in the hotel business of the future, while others are involved in the hotel industry as consultants, suppliers, academics, students – or just as hotel guests. But whatever their perspective is, each of these individuals has something interesting and thought-provoking to tell us about how the hotel business has turned out in 2036. They have lived through a number of changes that happened during the previous 20 years, and they tell us, from their particular point of view, how those changes affected the hotel industry.

Woody Wade: Yes – but then any book about the future is fiction, isn’t it?

Argo: Why did you write it using this fictional technique?

Woody Wade: Well, first of all, I thought it would be more fun. Instead of a dry set of predictions about how the future “will” turn out, I thought it would be more engaging to write the book as a collection of quotes from other people who had supposedly lived through the period and explain to us how the future actually “did” turn out. It was fun to invent a wide range of characters who had each experienced the developments that will characterize the 2016-2036 era.  Each in their own individual way, they share their observations – which are sometimes serious and sometimes lighthearted, but always meant to give the reader an interesting insight.

Argo: Give us a couple of examples of how your “witnesses” say the hotel landscape is different in the year 2036.

Woody Wade: The book is divided into four sections which each look at the future from a specific angle – political, economic, societal, or technological.

You want a couple examples?  Well, in the book, the GM of a Caribbean resort explains how a new online service, GuestAdvisor, has turned the tables on TripAdvisor by allowing hotels to rate their guests – and one particular guest is not very happy about it.  And in another vignette, a high school senior in the US wants to study at a certain hotel school but laments the fact that in 2036 tuition there is $155,000 a year.  So he applies instead to a special hybrid learning center that customizes a curriculum for him by choosing a combination of online courses, on-site semesters, virtual team projects and in-company internships from a menu of learning units provided by the 25 different hotel management schools that the center partners with – allowing him to study in four different countries and get his degree for a quarter of the price.

These two examples aren’t the most earth-shattering ones I could mention, but they’re typical of the way the book touches on many aspects of the hospitality landscape that will undergo changes in the next two decades, from technological developments to new educational possibilities. It also looks at demographic developments, regulatory changes, geopolitical events – and many other areas of change.

Argo: How realistic do you think the book is?

Woody Wade: Although the comments about the future, and the commenters themselves, are all fictitious, I’m not making up the future of the hotel industry out of whole cloth. The ideas and developments in the book, presented as if they had already happened, are I believe based on a solid reading of current trends affecting the business world and particularly the hospitality business, and where those trends might lead in 20 years.

Argo: You’re an expert in scenario planning, which is a planning technique used by companies taking a strategic look at the future.  Did you base this book on the scenario approach you use when working with your clients in the hotel industry?

Woody Wade: Scenario planning is about visualizing different ways that the future could potentially turn out.  So in that sense, the book does follow the concept of scenario thinking to a certain degree.  But a scenario planning exercise follows a more structured path to arrive at comprehensive future scenarios that could unfold, and in this book, I jumped straight ahead to the year 2036 without going through the intermediate steps first. It’s more fun that way!

Argo: Do you believe that this is the way the future will turn out?

Woody Wade: Well, I certainly believe that a lot of the ideas in the book could come to pass. Many of the specific vignettes are wildly exaggerated – on purpose, to make a point in a shocking or humorous way.  I don’t think those particular scenarios will come true.  But I would say 80% of the content of the book is at least plausible.

Argo: Who did you write this book for? After all, it’s just a work of fiction. Do you think busy executives will have time to read it?

Woody Wade: Anyone working in the hotel business over the past few years has already experienced many changes in the way hotels are managed, and I think they will be able to appreciate how dramatically the industry could change yet again over the next 20 years. So it’s a book for anyone who doesn’t mind being poked with some provocative ideas. Will people have time to read it? I hope so. I chose this particular style of writing to make it a quick read, and a fun one.

Since back in 2007, The Hotel Yearbook has presented the insights and opinions of key decision makers in the hotel industry. This year the publishers of the yearbook celebrate the 10th edition with a forward looking approach to 20 years in the future. With an introduction written by industry guru, Michael Levie, this year’s variation promises to break new ground not only for its novel approach to industry advancements, but for continuing to reveal the most experienced voices in the industry too. One of the industry’s most respected book and features authors,  Woody Wade is a former member of the Executive Board of the Geneva-based World Economic Forum, and a “futures coach” for scores of industry players.

The Keftiu: Were They Absorbed and Erased from History?
Live Like Great Odysseus: Book a Week at Santa Thekla Peninsula
Archaeologists Make More Stunning Discoveries on Crete
Four Amazing Eastern Mediterranean Wedding Experiences
Previous: Russian River Cruises are All the Rage in 2016
Next: Expedia Accelerator: Step Right Up, You Hotelier Fools