Job 1 - Differentiate - my dogma, not theirs

A Middle Eastern travel specialization group, The Travel Attaché, has announced having launched their services from their Dubai headquarters. According to their press, this office is the first in a series that will come to the region soon. But there seems to be more to this company than a press release can reveal. 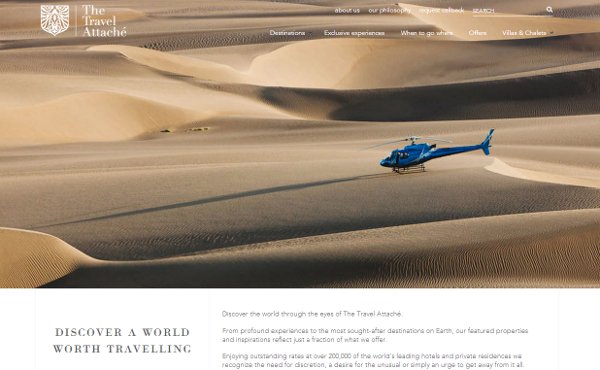 Job 1 - Differentiate - my dogma, not theirs

Okay, when I first read the news of yet another luxury online travel entity emerging, I was a bit skeptical too. After all, we are in the business of reporting travel startups too. But there is something distinctly different about this company’s approach to luxury getaways and escapes. Maybe it’s the imagery, maybe it’s their dogma that simply states: “Discover a World Worth Traveling”. This emerging luxury travel company timed their release just in time for WTM 2o12 too. Now see why.

Destinations on every continent but one – that’s no big deal – exclusive experiences there are though. For those of you out there that need, crave adventure even, The Travel Attaché will go so far as to turn you into a fighter pilot. That’s right, train to go on a dummy mission aboard a Spitfire or Mig. And for the pure Walter Middy mind out there, there’s even a Jason Bourne, James Bond or Jack Bauer identity waiting. That’s right, live out your super spy dreams.

Jets, cruises, yachts, safari’s galore, you can even become a pro golfer for a while utilizing The Travel Attache’s services. Oh! But I missed one continent! You guessed it, The Travel Attache has overlooked absolutely NOTHING. Experience the most extreme destination of all, Antarctica. Duck into your heated tend at basecamp, a place called Whichaway Camp for effect no doubt. Have no fear though, these are not ordinary pup tents without amenities. The most undiscovered destinations are clicks away now, for sure.

Back down to a form of normalcy, travelers can also just choose exclusive villas and chalets, the run of the mill five star stuff, you know? And too, like many a new company heading into the online space,  The Travel Attaché has made a share of mistakes with their website, etc. More on that later, even on the ground travel agencies need a complete online experience for those seeking one. A super start guys, but throw in some content for those ultra rich folks to chew into. More text, more of the imagery below, and people.

A bit of Turkish paradise via The Travel Attache

Clearly this company is tuned into one of the most powerful niches in the travel game. I liked what they have going on almost immediately. Remember I said “no stone unturned?” Well, I am “inquiring” via one of the emails I was pointed to, it is 14:40 CET right now, I ‘ll let you know how engaged these guys are as soon as they respond. Til then, I highly recommend you check out their offerings, even if for ideas on travel.

Companies intent on penetrating the diamond crusted luxury market need to focus on the individual. Somehow I cannot see anyone so well heeled wanting a cookie cutter experience. On the face of it, as I have alluded here, these guys seem on track. As for how far they do to be truly differentiated? I intend to find out for you. More later, stay tuned. Oh, and before I forget, coming soon – The Ticket Attache!

Update: At 0:652 this morning I received a very nice email from the CEO of The Travel Attache, Liam Wholey, suggesting we speak over the phone about his company’s plans going forward. Given that WTM 2012 is occupying just about every hospitality CEO on Earth at the moment, I would consider this level of reciprocity in the top one percent.