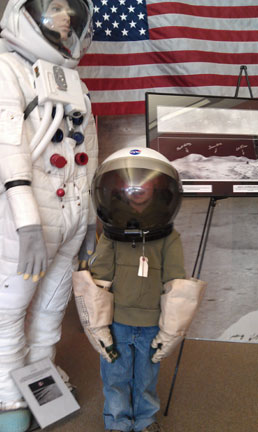 Opened last October in Novato, San Francisco, The Space Station is a new type of museum containing various space artifacts, photographs inscribed by astronauts, as well as other testimonies from their space adventures.

During this period of financial austerity, the brand new museum comes to educate children about the thrilling history of space exploration, offering a unique quality experience for both locals and tourists.

Created at the initiative of the renowned philanthropist Ken Winans, President and Founder of Winans Investments, The Space Station didn’t require high construction costs or government subsidies. On the contrary, Mr. Winans’s idea was to set up and operate a small museum in one of the mall’s vacant retail spaces, for $1 per month, and when the space will get rented, the exhibition hall will move to a different venue, becoming a nomadic museum.

All being set up, the W Foundation, established in 2002 by Mr. Winans and his wife Debbie Wreyford together with The Walter Kieckhefer Company (WKC), agreed to open the museum to the public in November, after a sumptuous ceremony attended by legendary astronauts such as: Rick Searfoss, John Herrington and Dick Gordon.

The project proved to be a success, as the museum, open only three days a week, has averaged 642 visitors per month, increasing the traffic in Pacheco Plaza Shopping Center substantially.

In order to increase the public’s interest in space exploration and to offer people an idea about the importance of space travel in our civilization’s progress, the museum develops a very interesting strategy. With the help of volunteer staff, exhibits in the Space Station are changed four times a year to encourage returning visitors.  The public have the chance to live a unique experience, as they are allowed to touch some of the space artifacts exhibited in the museum.

The Space Station’s remarkable success consists not only in its large number of visitors, but also in the significant increase of the number of volunteers, and donations which are covering most of the operational costs.

In June 2012, The Space Station will move to a new location in Pacheco Plaza Shopping Center, planning an open-air event called the Space Fest on July 14th.