Just the other day we reviewed a European startup aimed at providing a travel search evolution of sorts. Movolo’s “door to door” approach to travel bookings being something not yet refined by the big online travel players. Today we took a look at another innovative travel search entity, SnowTrax, which targets those in search of the perfect fine powder ski deals. Check out their latest marketing campaign on their Facebook pages. 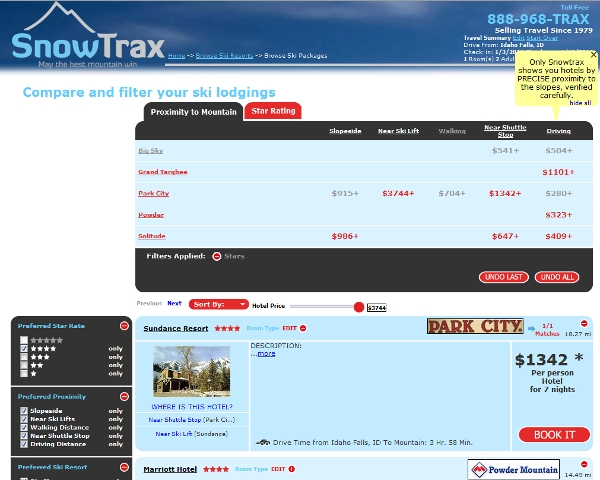 Filter yourself silly until you find that perfect ski getaway

Let’s face it, search is about convenience when all is said and done. The relevance and user experience are pretty much determined by how convenient (credible and quick) the tool is for users. Well, SnowTrax is all that, but not quite perfectly so. Let’s take a brief look at what may be the future of Winter ski excursion searching.

As a meta-search engine for isolating ski trip deals, SnowTrax cuts through the maze of choices pretty nicely. While the interface is a tad cluttered (as you can see) with a bit of practice users can easily filter their ski excursion down toe the last dollar spent, or the final snowflake (well, almost). In actuality SnowTrax lets users find their ski getaway quickly and efficiently. 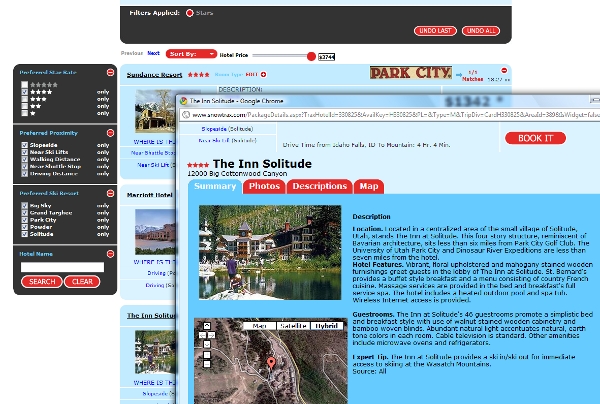 The company’s dogma rings true at least in view of users being able to “know everything about the ski vacations they want,” you can filter out nearly anything with SnowTrax (except ugly pictures of ski lodges). Price, location, star rating, geography, you name it, users can create a very customized vacation package in minutes here. But then there is a slight rub as per usual with early startups. SnowTrax President Joe Bous is so transparent in a statement to the press as to show off a bit of ignorance (or too much honesty):

“Marketing travel deals often lead to a disappointing ‘bait-and-switch’ scenario for users trying to redeem deals.” Flights and hotels prices are acquired in real-time; that is why Twitter and Facebook are the ideal platform to broadcast the best deals we find all day long.”

Joe should know, or someone should have told him, Facebook and Twitter peeps do not like to be “broadcast” to. The so called conversation is not designed or thriving just to hear about Joe’s or anyone else’s deals. The ski world is the one doing the favor, not SnowTrax. This attitude is amply reflected in the mashup at the bottom of this page.

So many traditional corporate types just view you, and your Facebook presence, as an open doorway to “broadcast” their BS. I am not offering our PR services, we do not have the time, but if Airfare.com or SnowTrax care to capitalize on their work, someone needs to consult someone. Maybe some Washington hype flew over to Bethesda where Snowtrax and Airfare call home? 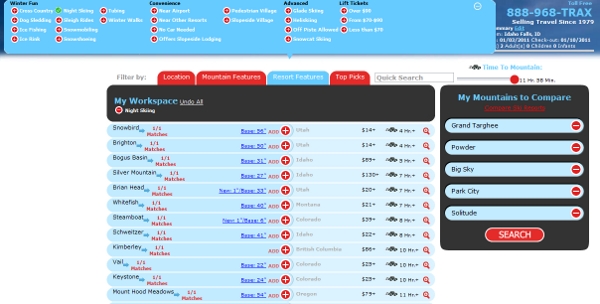 As you can see, filtering is very in depth

All that being said, SnowTrax as an arm of Airfare.com has a great potential especially in the narrow Winter ski wonder market. What I would like to see is an international variant, which I am sure is on the way. It only makes sense to snag all the online revenue possible for the snow sport season, and to do it worldwide rather than just in the US. The problem I see SnowTrax solving for Airfares is a pretty obvious one, airline tickets just have no margin these days – hotel and add on bookings are where it’s at, and SnowTrax can bump up ROI there.

In conclusion, SnowTrax does a great job of chugging out refined results after a bit of user input. What the site does not do is overwhelm anyone with rich media or even images. And when separate windows appear with down right ugliness, any sex appeal the site has goes away fast. Where holiday search-worthiness is concerned – SnowTrax does it. For aesthetics and total user friendliness lays, the site needs some refinements. Let’s just say there are sections of “yellow snow” on the beautiful slopes of SnowTrax.

As for social media engagement and the “right take” on outreach in the 21st Century, I get pretty cruel about lip service Web gurus – in fairness ShowTrax comes by their broadcasting nature honestly, parent Airfare is squawking their tweets out too. 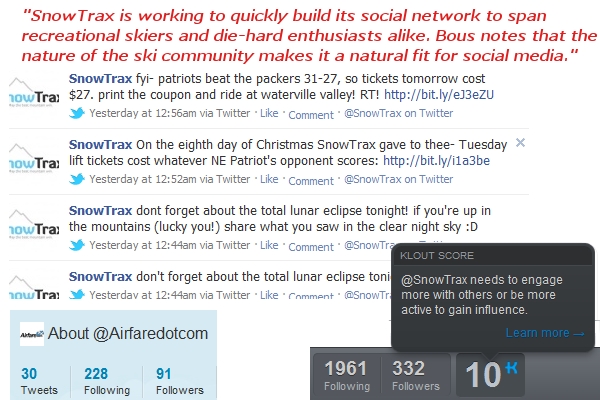 Professing and doing are two different things - marketing is marketing