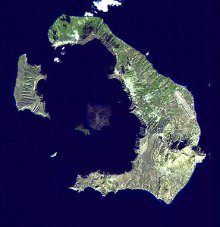 Reports on a magma pool building beneath the Greek Island of Santorini have brought on mixed, even confusing opinions about what is going on at the popular tourist destination. Unquestionably, the magma buildup reported by scientist earlier in the year is valid, but are local authorities leveling with potential tourists?

For some historical background, Santorini is the modern name for a volcanic Island known as Thera in ancient times. Some historic evidence has even pointed to Thera being the real world subject of the poet Homer’s recollection of famed Atlantis, but this is conjecture for another time. The point here for ancient Thera or modern Santorini is that when the Bronze Age eruption took place at this local somewhere between 1645 BC to 1500 BC, was powerful enough to alter history. With an estimated eruption index of 7, the Thera eruption was one of the, if not the, most powerful volcanic explosions in Earth’s history. Thera exploded with a force 4 times that of Krakatoa. Now the volcanic activity has resumed.

Not to sound too alarmist here, researchers have already said the magma buildup under Santorini is similar to a buildup during the volcano’s last eruptive state, which lasted from 1939 to 1941. Officials on the Island are quick to dispell fears of any major seizmic event on the horizon, having taken note of the reduction of micro-seismic activity since scientists measured data accompanying the magma flux. Obviously reports of potential volcanic activity can have their effects on tourism.

It’s quite obvious the danger of an explosion of the magnitude of the Bronze Age one is remote indeed. What the bird’s eye view from satellite shows the reader (upper left) is essentially what is left when the entire central part of an Island colony is catapulted miles into the atmosphere. The crescent shape of Thera, now Santorini, bears witness to an event some say destroyed the most advanced civilization of the ancient world, that of the Minoans. Any volcanic activity today can only be classified as similar to that other famous volcano, Krakatoa, in Indonesia.

There is some activity there on one of the Islands leftover from the 1883 explosion heard round the world. What you see below in the image from Wikipedia, is what amounts to a tiny volcano in the center of what’s left of Krakatoa. 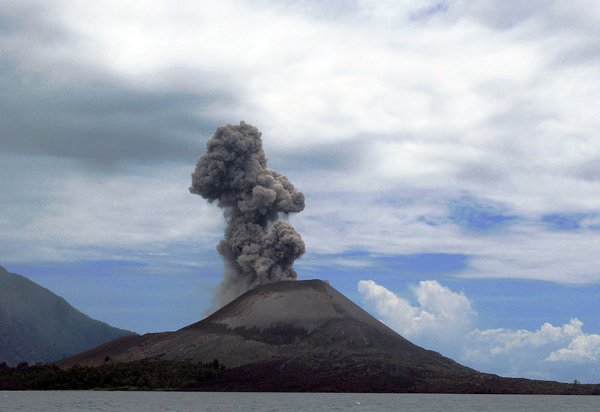 Anak Krakatau appeared in 1927 and started to form a new cone afterwards. What you see above is basically the way these kinds of volcanoes evolve. So, an eruption on Santorini would be more likely proceed similar to the Krakatoa example from Nea Kameni island in the now flooded caldera of the volcano. Eruptive episodes have occurred there in 1570, 1707-1710, 1866-1870, 1925-1926, 1939-1941 and 1950. The bottom line on Santorini seems to be observance, and I quote from authority:

“The assumption that seismicity is linked to the influx of magma into the volcano is supported by GPS-based studies on deformation at the caldera (Newman et al. 2012. In Press)”

Past explosive events of a magnitude to cause serious damage, namely the eruption in 726 AD, seem to have been related to the time in between eruptions, or a buildup of magma pressure etc. Experts all but rule out an eruption of the Bronze Age magnitude, but caution more than the obviously one sided view of tourism boards. However, the fact that fear of some seismic event will cause economic damage more severe than an actual eruption, seem as spot on as any prediction.

Much of our world is subject to some natural calamity of other, volcanoes to tsunamis and avalanches to floods. Being observant and forewarned is the best advice anyone can give or receive. At this moment volcanoes in Alaska, Guatemala, Nicaragua, Japan, Indonesia, Iceland and around the globe spew lava and/or show signs of life. We will follow the Santorini activity and offer updates. The informative video below reveals the history of Thera, now Santorini, and the civilization that once was there.