The northern part of Romania’s capital, Bucharest, has, starting last week, a new mall. Named Promenada, this new shopping mall promotes itself as being the only mall entirely built during the crisis. Fortunate by location, near the landmark Sky Tower, the mall stands excellent chances to becoming one of the premier shopping destinations in Bucharest. 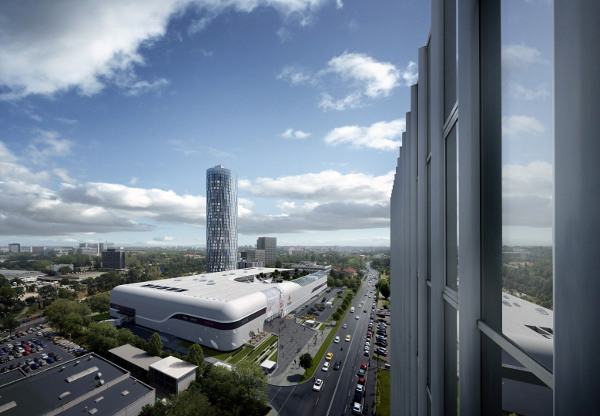 Promenada is a 35,000-sqm shopping mall built by Real estate developer Raiffeisen Evolution, which invested over EUR 130 million in the project, and plans to sell it. 140 stores located on four floors await their visitors, with Peek & Cloppenburg being the largest tenant. Other important brands include H&M, Humanic, Lacoste, Manoush, Stefanel, Massimo Dutti, Musette, Roberto Bravo, and Sephora, among many others.

Located at the crossroads of Floreasca Road, Pipera Road and Barbu Vacarescu Street, Promenada mall has more potential than Baneasa Shopping City, the previous mall in the neighborhood, which is located near the city’s airport. Shoppers are most likely to choose Promenada, to avoid the crowded DN1 road. Shoppers who plan to visit Ikea in the same “trip” are most likely to choose the Baneasa Shopping City.