Russian online hotel booking site Oktogo.ru, which provides online hotel booking worldwide, boasts a directory of over 2500 Russian hotels and apartments and 140,000 hotels in 160 countries and 26,000 cities. The site claims to be working with hotels directly, and promises customers the best prices in the industry. Obviously, they must be doing something right.

The site has been recently included in The Top 10 Russian Internet Brands Out to Conquer the World by The Moscow Times. The site is already a leader among Russian online travel sites in the National Geographic Traveler Awards 2012. 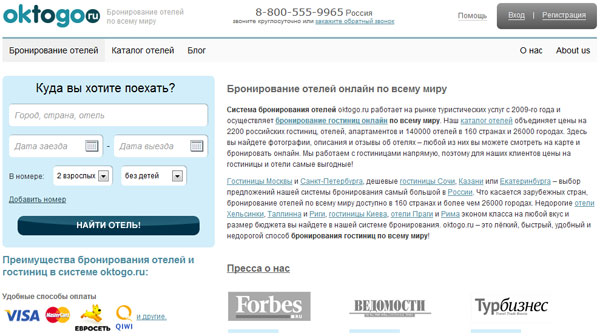 A hotel booking site that launched on the marked in 2010, Oktogo.ru is still considered a startup. However, last year alone, the site generated over $1 billion in gross online bookings, according to the listing in The Moscow Times:

Global online travel agencies generated over $1 billion in gross online bookings in Russia last year. That was about half of the market. The other half is being grabbed by Russian upstart Oktogo.ru, headed up by Marina Kolesnik. The Russian online travel market looks set to rocket thanks to the Winter Olympics in Sochi in 2014 and the World Football Championship in 2018.

Lend Me Your iPhone to Test the “Backdrop App” Game Changer
Game-changing AI-powered Travel Innovations
VR Travel Experiences that Shape the Future
A Grain of Salt and H2O Hospitality Gets You 2.5 Star Bliss
Previous: Foursquare on Steroids: Grafetee’s Mobile App
Next: 5 Things Travelers Should Never Forget