The famous Sicilian volcano, Mount Etna, erupted this Tuesday, and was captured on video by Klaus Dorschfeldt of Italy’s National Institute of Geophysics and Volcanology (Istituto Nazionale di Geofisica e Vulcanologia). As you will see in the video at the end of the news report, the eruption was more than spectacular, with rivers of lava flowing downhill, but directed away from the inhabited areas. There were no warnings of danger issued. 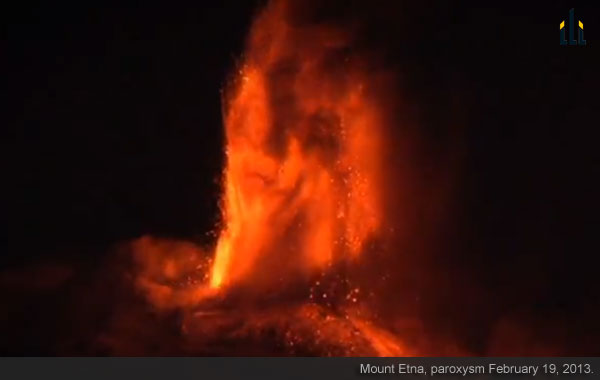 Etna’s New Southeast Crater erupted first at dawn on February 19 – the most spectacular of three paroxysms – then again after midnight on the 20th, and finally, at midday on the same day. These were the first big eruptions for the volcano this year.

The first of these events, which had its period of greater intensity between 00:50 and 01:35 local time, issued an ash cloud directly to the east-southeast, lava flows from the fissure that cuts the south-eastern crater rim, and a new eruptive fissure, which opened on the lower southwestern flank of the cone. In the late morning, the activity began to grow again, and a new eruption followed shortly after 13:15 GMT until about 13:50 GMT. This event also produced an ash cloud headed for the eastern sector of the volcano and new lava flows have expanded on the trail of those issued during the previous episodes. By 17:15 GMT yesterday, the volcano was still undergoing a gradual emission of lava from fissures in the south-eastern base of the cone of the New Southeast Crater.

The rapid succession of three paroxysmal eruptive episodes in less than 36 hours is very strong, the only previous known in the recent history of Etna with a similar frequency happened in 2000. Although the lava flows did not endanger local populations, the ash cloud that followed caused minor inconvenience. If you travel in the area, note that there are high levels of respirable ash in the air.

Potential respiratory symptoms from the inhalation of volcanic ash include throat irritation and sore throat, dry coughing, severe bronchitic symptoms, shortness of breath and wheezing for people with asthma, nasal irritation and discharge.