The Netherlands Has a King, Willem-Alexander #oranjeboven 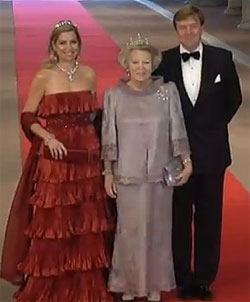 Thousands of people gathered today in front of the Royal Palace in Amsterdam to welcome the country’s new king, Willem-Alexander, the eldest son of of Queen Beatrix of the Netherlands, who abdicated in his favor today, after a 33-year reign.

Willem-Alexander is the country’s first king in over 120 years, and he will be officially sworn at the Nieuwe Kerk later today, before God, the nation and a joint session of the Dutch parliament.

Dutch citizens are dressed in orange for the occasion, and show their support on social networks as well:

Oranje Boven!! After 120 years, a King for the Netherlands: bit.ly/Zwfqgu via @mailonline …all proud Dutch wearing orange today!

The new king appears on the balcony in Amsterdam for the first time as King. Lang leve de Koning! Oranje Boven tmblr.co/ZoL4pxjtPvtT

#emoday long live the king! I love my country!! #ORANJEBOVEN

If you ain’t Dutch, you ain’t much! #OranjeBoven ( bron: @kingendrick)

Lately I’ve been traveling so much! 1 thing i know tho, I’ll always be a Dutchie, and I’m proud of it! #oranjeboven twitter.com/Natalie_LA_Ros…

In the eve of her abdication, Queen Beatrix addressed the nation, and expressed feelings of deep gratitude towards her subjects.

“Without your heartwarming and encouraging displays of affection, the burdens, which certainly have existed, would have weighed heavily,” she said. You can watch the full address in the video coverage below.

A Farewell To Another of the Small Gods of Crete, Nikos Zacharioudakis
A Word or Two About Ryanair CEO Michael O’Leary and Other Bean Counters
Expert Viewpoints: Hospitality 2021 and Beyond
Actress, Singer, Songwriter Rita Ora Vacations On Corfu
Previous: Stay WordPress Theme for Hotels Helps You Attract more Guests
Next: Putin Discusses Rebuilding Moscow Museum of New Western Art