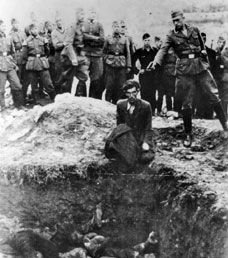 Last week saw the official opening of a new exhibition in Kiev, Ukraine, commemorating the execution of more than 1.4 million Jews in the country during World War II, “The Holocaust by Bullets: Mass Shootings of Jews in Ukraine 1941-1944”.

The exhibition, which has already been shown in Paris, New York and other cities, comes to the Ukraine for the first time, as part of a project aimed at building tolerance in Ukrainian society, especially its youth. Based on evidence collected by a French Priest, Patrick Desbois, the exhibition forms part of the state’s commemoration of the 70th anniversary of the Babi Yar tragedy, where 34,000 Jews were murdered and thrown into a ravine outside of Kiev, reported Korrespondent.net.

Originally the brainchild of the Shoah Memorial, The Holocaust by Bullets: Mass Shootings of Jews in Ukraine 1941-1944, was supplemented and adapted by leading Ukrainian experts on the Soviet Holocaust in partnership with the Victor Pinchuk Foundation. Hundreds of incredible exhibits are on display, including wartime photographs showing executions and mass grave, documents detailing the slaughter of thousands of Jews, video interviews featuring witness testimony, and a wealth of physical evidence including spent bullet cases, bones and skeletons of the victims.

In attendance at the opening of the exhibition were the Rev. Patrick Desbois; Baron Eric de Rothschild; Vladimir Litvin, president of the Shoah Memorial, France; Viktor Pinchuk. Ukraine’s Speaker of Parliament; plus the ambassadors of Israel, France, Germany, the USA, the UK and many leading historians and experts from across the world.

Rev. Patrick Debois made the following statement at the opening ceremony:

“Our goal is to identify the mass graves of genocide – we do not hunt for the killers and do not try to hold anyone to account. Instead, we are looking for victims, who in the historical reconstruction of events are often forgotten. The essence of our work is education, awareness and understanding the Holocaust in Eastern Europe. Through this we can prevent genocide occurring again in the future.”

“We are all united in achieving the same goal – to remember what happened and understand how it happened. We must make sure this nightmare is never repeated, and that courage, cooperation and tolerance will always prevail in the future. The knowledge and memory of our common history will serve to strengthen the European identity of Ukraine.”

The exhibition is being held at the Ukrainian House (Kiev, Khreschatyk 2) from September 9 to October 3, and will be open Monday to Friday from 09:00 to 19:00, Saturday to Sunday from 11:00 to 17:00. Admission is free. For more information, here is yet another view of the opening.

Research Claims Americans Plan to Visit Europe Despite Ukraine Conflict
Ukrainians Travel Visa-free to the EU from June
Hike the Snow Mountain: Hoverla in Ukraine Is a Mountaineer’s Dream
Georgia and Ukraine Closer to Visa-free Travel to the EU
Previous: Gowalla: Will It Be Google’s Next Announcement?
Next: EuropeTravel Launches New Social Networking Travel Portal