Google Is NOT Taking Over Travel With Hotel Finder

Yes Sir, the enemy is reportedly in full retreat after this most recent experiment Google Hotel Finder, putting the nails in the coffins of OTA's.

Yes Sir, the enemy is reportedly in full retreat after this most recent experiment 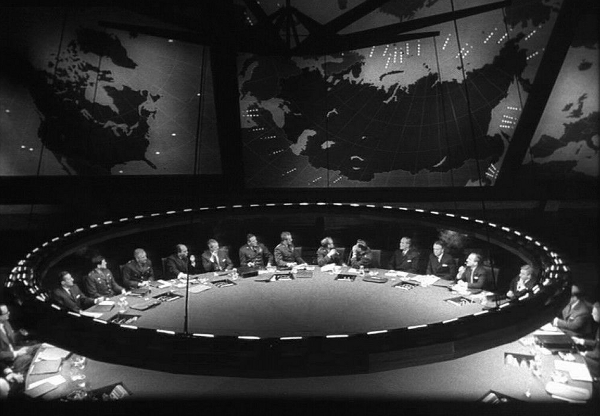 Yes Sir, the enemy is reportedly in full retreat after this most recent experiment

I have been lurking here at my desk in Germany waiting, pondering, imagining the exact moment (for over a year now) when the world would realize online travel needs Google, it wants Google, in places deep down inside, where Expedia, Sabre, and others don’t want to go. This is fun news. Let me show you a bit of how Google Hotel Finder works.

Minimalist 2nd generation, just like Google +, Google Hotel Finder just begs for the place name to start the hunt. As you can see below, I have selected my hometown, Charleston, SC. Not much way a hotel suggestion could buffalo me in Charleston, let’s take a look.

Let me say this first off, these results popped up literally in the blink of an eye when I hit search. Maybe that was a glitch, maybe my connection burst wide open and let the data in? But, Google Hotel Finder (if this is the speed it really works at) is the fastest hotel search mechanism on the planet. I will test this later, but a cursory look at these hotels verifies Google has done their homework quality wise, the five star Charleston Place entry at top is definitely where you want to stay if you want to explore downtown Charleston – if you can afford it, that is. How about those filters?

Okay, I ran across the two slight glitches, normal for any such massive development. The first is a bit of optimization problem with this idiotic Opera browser I am using (yes, idiotic, more on that later). Second, and this is not really a glitch, the short list of hotels is a bit limited. 37 hotels in Charleston? But, the “add to shortlist” feature will probably see hotelliers and peeps suggesting hundreds more – with Google’s reputation for engaging users – TripAdvisor will probably die a horrible death, alone, watching the matrix of travelers go by, on the way to Google Travel. Oh my. Okay, onward.

Google Hotel Search filters work like a charm. Price, popularity, rating, stars, combinations of prices and etc., the interface is slick. And, the hotel displays are some of the nicest anywhere online. Bigger images, and not just blurry ones (but they could be bigger), owner description where you can actually read it, address, phone number, pertinent stuff up front, blah blah. Then there is what I call “the money maker” – Google’s newest ad serving device – Hotel Finder agnostic (almost) booking suggestion. The image below displays a wonderful hotel, The Vendue Inn, with the source site and booking, Travelocity, and Priceline featured in Google’s booking scheme. 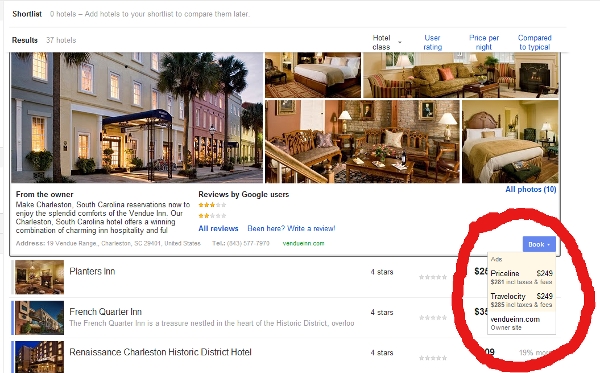 As you can see below, I have “short listed” two hotels in Charleston. What is a bit more difficult to see is a most interesting (and perhaps revealing) feature. Google Hotel Finder allows the user to compare prices for their shortlist over the preceding year. Beyond the coolness and usefulness of this feature, think about how Google might do this. Google has indexed billions of pages of price data for a lot more than a year I bet. For the geek out there, imagine all the permutations! Any way, no the my tentative conclusion. The only real negative I have for Hotel Finder at present is the fact it is only for US hotels currently.

Place, price, choices, comparison shopping - all the tools to make a qualified selection - and fast

I am not going to say “I told you so” any more today. What Google has launched speaks volumes for their ingenuity, drive, and intentions too. The last image below reveals a fascinating map feature on Google Hotel Finder. I could be wrong, but not so far, but I believe what you will see here is the baby steps toward the most advanced location based interface ever created for non-military use. Sounds ominous I know, but test Google Hotel Finder yourself, I will leave the super secret discoveries to you. Highlighted neighborhoods, almost cinematic map viewing with vectors, hmm.

The interim analysis on Google Hotel Finder you say? Stick a fork in every other hotel finder and booking mechanism out there. Hotels.com to Kayak, you gotta buy those ads now. More later as I give this thing a real test. Superlative work from Google, is all I can say. ON a final note. Another of my Google predictions came just the other day when I suggested Google would be launching in machine gun fashion, one-innovation-right-after-the-other. Well, here it is Facebook, Bing, Expedia, MS, Yahoo! and the rest. A virtual blanket of Internet technologies headed to users. From a simple branding standpoint – a veritable blitzkrieg – in the case of Hotel Finder – named an experiment.

I leave you with the truth Google’s competitors may have to admit. Phil out.

Campspot Publishes the Top Outdoor Travel Trends for 2023
Ideas to Make the Most of Your Visit to Phuket
Trends Say Americans Guarded Over Travel 2022
27 Inspirational Travel Quotes to Fire Up Your 2022 Travel Bug
Previous: Bucharest City Tour Route Launched
Next: HouseTrip – A Startup Taking Aim At Travel Alternatives