It is not the ideal time to travel to Albania, Bosnia-Herzegovina, Croatia, Serbia or Montenegro. The five Eastern European countries were hit by a natural disaster of unprecedented proportions.

Recent floods took three lives in Bosnia-Herzegovina in the northern town of Tuzla, while 12.000 people were evacuated in northwest Albania, and around 14.000 acres are under water. Smaller Montenegro had to evacuate about 1.300 people as well, and the floods here are reported to be the worst in last hundred years. The damage in the inundated areas raised over 340 million euros, adding to the woes of budgets already under strain from the economic crisis. 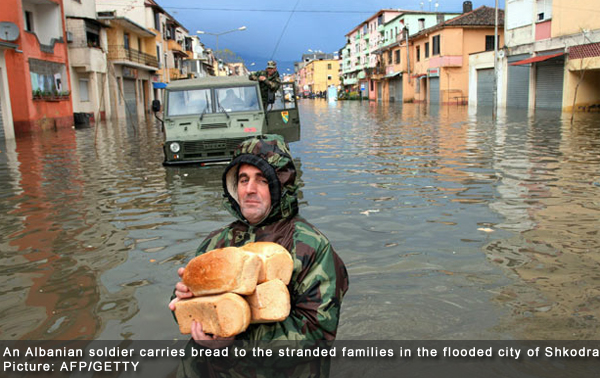 The situation follows five days of continuous rains, that already closed schools and other institutions in Bosnia-Herzegovina, during what has been described as the worst flooding in a century. Many urban and suburban areas are completely cut-off from electricity and phone lines, road and rail transportation is virtually impossible. The Bosnian Army and volunteers have to use boats to bring food and medication to the stranded families. Beautiful Albanian Shkodra is two meters under water, Lezha and Durres are also heavily affected, while the locals hope and pray for help to arrive faster.

NATO has already sent military transport helicopters from Greece and Turkey to Albania, to help the army and local authorities. Italy sent 25 tonnes of food and clothing, and other countries are responding to the appeal. But the situation cannot be easily contained. In addition to the three aforementioned countries, the flooding also hit Croatia and Serbia, although the situation there is not as desperate.

Wizz Air Stops Flights on Three Lines to Split Airport
Deadly Albania Earthquake Casualty and Damage Tolls Climb
Marshal Tito’s Famous Yacht to Be a Floating Museum
The Kolašin 1600 Ski Resort Gets Its First Snows of the Season
Previous: goHow Airport Mobile App Helps You Make the Most of Your Flight
Next: Welcome to Russia Really Does Welcome Tourists