A recent analysis by Euromonitor International shows that, generally, the larger the city, the higher the income inequality all over the world. The conclusion is valid in the U.S., but also in Brasil and China. 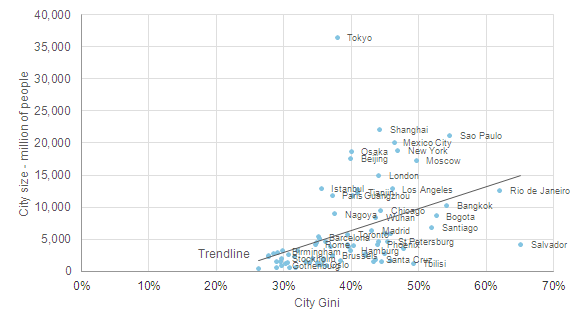 The report analyzes the Gini coefficient which “is a standard economic measure of income inequality – the larger the value of the coefficient, the higher share of total income is concentrated in the pockets of the most affluent population.”

“Be it the US, the UK, China or Brazil, the most unequal distribution of income is found in the main cities of the respective countries. Thanks to the large jobs market, megacities often lure the unqualified population from the country‘s hinterlands (or from abroad, in the case of the most developed countries). For the skilled and talented, big cities magnify their returns to scale. The result is enormous disparities in income,” specifies the official blog of the Euromonitor International.

In what the U.S. are concerned, Los Angeles, New York and Houston are some of the country’s most unequal cities and, perhaps even more important, the inequality is growing.

“Inequality is not only about money, but also about politics, the quality of neighbourhoods, and access to public services.”

Some inequalities were discovered in the UK as well, but the high overall income level allows this country to escape the general trend. However, London presents signs of inequality, as there are areas with prosperous people as well as parts of the city steeped in poverty. Large cities in the UK remain the most segregated areas.

A huge difference between the average income of the 10% richest and 10% poorest households was seen in China, where the corresponding difference was 35 times in 2011 (from only 13 times in 2001). China is a country with a boom in population number, therefore changes are spectacular from one year to another. The largest cities in the country are also the most inequal ones.

A similar situation is registered in Brasil, where the difference between the average income of the 10% richest and 10% poorest households was 38 times. In this country however, the middle class is growing and inequality is at a long-term low.

All in all, as the analysis shows, “large means inequality”, and it is not always in what the income is concerned, but also in regards to other sensitive areas. The conclusions of this analysis pose some interesting challenges both for urban planners and urban marketers. The first ones have to come up with policies that will integrate the poor people, while the urban marketers have to make really careful estimates on purchase power.

The WWF Warns Us the Mediterranean Is Becoming Tropical Sea
Europe’s Second Lockdown Already Crushing Stays
Will the Coronavirus Pandemic End the EU Experiment?
Four Balkans Countries Will Bid for 2030 World Cup
Previous: Sochi 2014: The Negative PR Smear Needs to Stop
Next: The 5 Best Cities in Eastern Europe to Visit this Summer