Prayer of Yidini: Echoes of Karfi

The morning dew was heavy as it settled in droplets on the etched stones on the precipice of Karfi. Sitting alone in the shimmering mist at a peak sanctuary above her home, Yidini peered out toward the Cretan Sea beneath the last stronghold of a vast empire. In that misty moment when wakefulness meets day, she thought briefly about the ancestors who had built this refuge high atop the mountains of the Lassithi Plateau. In her mind’s eye she could almost catch a glimpse of the wonders her people lavished upon the world 1,000 years before – before the gods turned their backs on Keftiu.

When I think about the Minoans from my desk, I cannot help but visualize how magnificent the Bronze Age must have been here on Crete. All the legends this place has given the world, rich traditions and ethereal spirituality that imbued western civilization with purpose and hope for thousands of years. Epic. This is the only word that describes Crete, even to this modern day. But back around 1450 BC, Minoan culture reached a turning point – a sudden paradigm shift most archaeologists agree was the eruption of Thera, which is modern day Santorini. That monumental event, some say the most violent volcanic eruption in recorded history, destroyed Minoan palaces of inestimable beauty and grandeur. However, the nuclear winter and tidal wave that certainly devastated Minoan Crete back then were not the greatest cataclysm of this island. The Thera eruption and the ensuing events ruined a vision, an idea, and a kind of spiritual Eden in the center of the ancient world. You see, my imaginary Yidini, she may well have been a real person staring out into eternity at the real city of Karfi, looking longingly as what might have been. Yidini, by the way, is a Minoan name written on an Egyptian tablet sheltered in the British Museum. 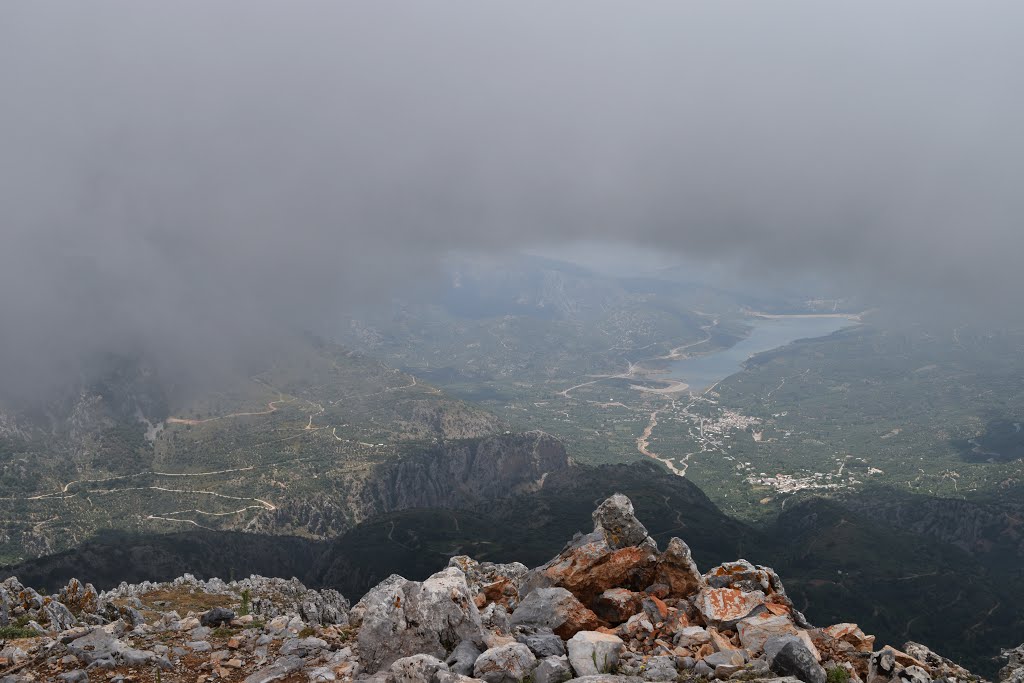 View Northwest from Lassithi near Karfi toward Aposelemis Dam – Mapio

After the palaces at Mallia, Tylissos, Phaistos and Hagia Triada, and part of famous Knossos were destroyed, it would not be long before the warlike Myceaneans ventured to conquer the weakened Minoans. And when I say “weakened” I do not mean militarily, for the Minoans seemed to have no need for a warrior class – their power was certainly derived from the gods – this is the only explanation for their importance and influence across the wider ancient world. What died when Thera disappeared beneath the waves of the Aegean was the Minoan belief system. There’s ample evidence that the hard times brought about by this natural event caused the people to turn their backs on their own religion. I mentioned the Palace at Phaistos being destroyed, but there’s evidence of burning and maybe looting at this inland hilltop location. It is believed the Minoan people revolted, burned anything and everything associated with their gods, in anger and frustration over their being brought low by disaster. And imagine how it must have been, to have ruled the world in peace, and to then be cast into hunger and despair. 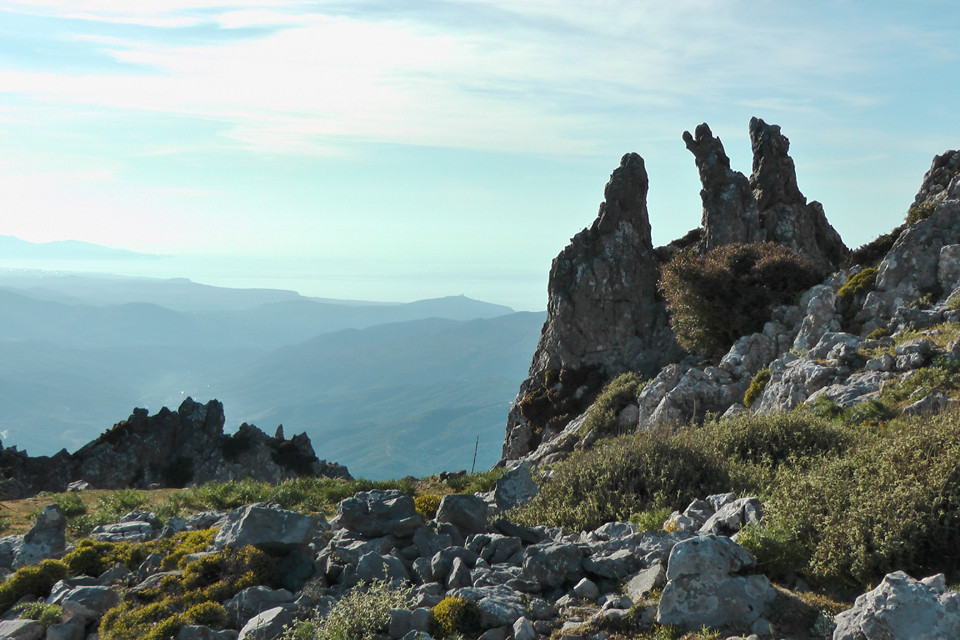 By the time the Dorians arrived on Crete after 1100 BC, our heroin Yidini would have been a Minoan girl of lower station, a normal working class servant to some well stationed Mycenean royal perhaps. Driven into these m ountains of Crete by the Dorians, the last vestiges of Minoan culture survived only as a subculture of the Mycenaeans. They seem to have surviving only as an underclass, and their language was only a peasant speak by the time Karfi became the last stronghold. Some archaeologists refer to the mountain refuge as a kind of “Cretan Machu Picchu,” the holdout fortress of the Inca in Peru. 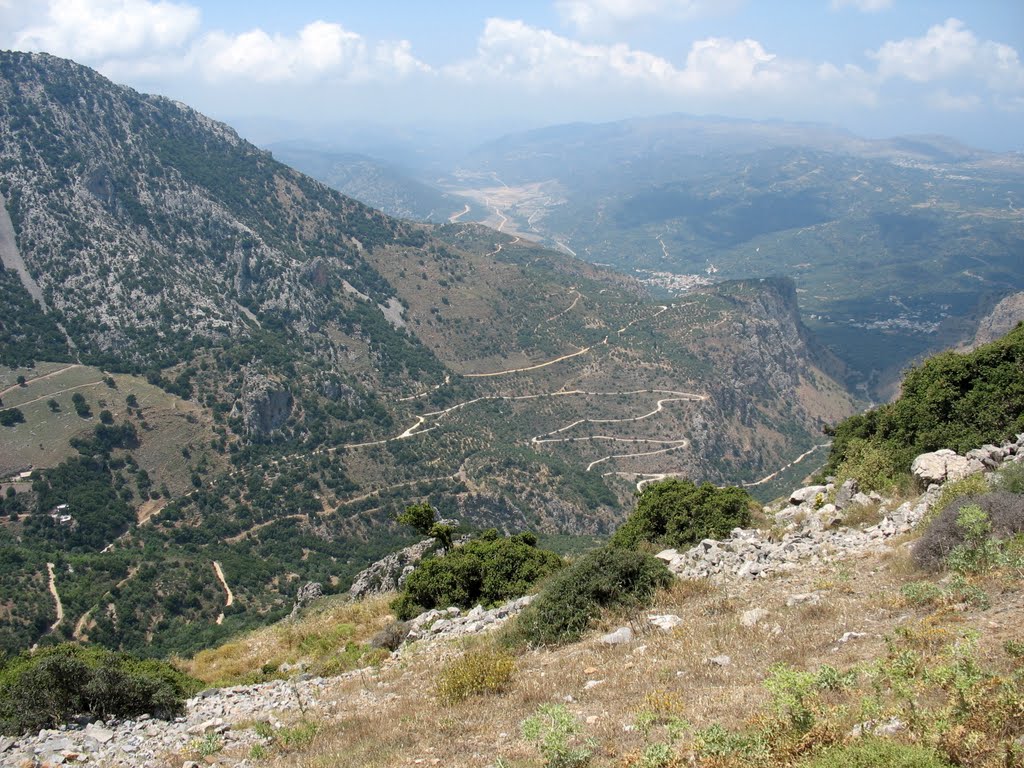 I try in the early morning ours here to visualize  Yidini and her family gathered around a hearth and saying long forgotten prayers before ancient religious figurines of goddesses with those unique cylindrical skirts, their hands raised in the epiphany gesture. I can hear the prayer that their way of life and their fantastic beliefs should never be forgotten. Yidini surely prayed her children’s children might recall what Atlantis was like. Sitting here listening to some Cretan music and typing, it occurs to me the last Minoan prayers were answered. For here I sit, among my friends, the children of their children’s children, thinking about a wonder of the ages. Karfi. I must go there to hear the wind whispers of Yidini, Nashuja, Yikashata, Kikeru, Yishharu, or other Minoans we know lived here.