Tour operator “Biblio Globus” has just signed a deal with  “Russia” airlines for the use of 13 aircraft under contract until 2018. With Russia set as a priority destination for the company, “Biblio Globus” announced an extensive flight program for Krasnodar and the Crimea as well. 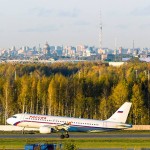 The news from Interfax tells of departures are planned from Moscow, St. Petersburg, Yekaterinburg, Novosibirsk and other Russian cities. Just yesterday airline “Russia” announced deals on flights in between St. Petersburg and Barcelona for as little as 14,647 rubles (€165), round trip.