The EU with Croatia in dark green - courtesy Atoine85 The EU

The EU with Croatia in dark green - courtesy Atoine85

In Croatia, not many people or officials could have predicted finally achieving EU member status would find the country worse off. This Reuters report shows the ugly side of today’s European Union economics, Croatia and other states wallowing at the bottom of the coalition’s heap. 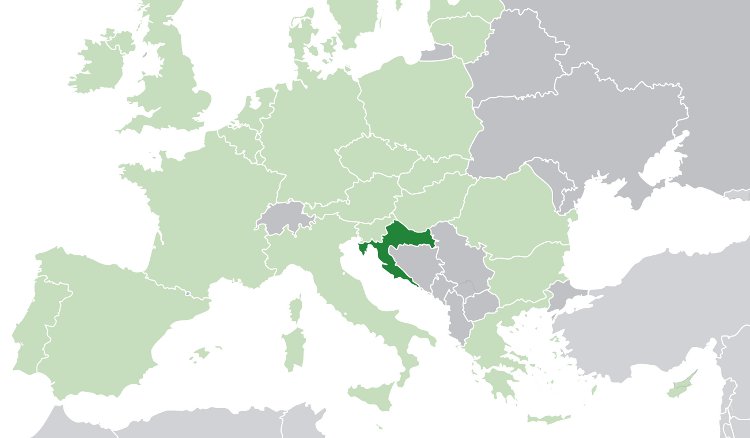 The EU with Croatia in dark green – courtesy Atoine85

Croatia, the EU bloc’s 28th member state, has an economy that continues to shrink where it counts most. The country with the most potential as a tourism destination, may end up being dragged down, not by tourism numbers falling, but because other member states simply outperform in manufacturing and in other sectors. This, along with the pressures already being felt from the rift between east and west over Ukraine, does not bode well for Croats.

Even Greece and Cyprus show more promise that Croatia, according to Reuters’ and other reports. Startups and investment there, other than in tourism, just aren’t anything to write home about. What’s even worse, Croatia tourism may be taking a big hit too. Just the other day we reported on Darko Lorencin, the Croatian Tourism Minister, making it easier for Russian tourists to visit. With ongoing sanctions against Russia, and an emerging Cold War mentality in the west, it looks more and more like those Russian travelers will be staying home this Summer. Maybe forever.

Formerly part of Yugoslavia, Croatia emerged from heated wars and worse to become the gem of that former republic’s fragmented parts, at least tourism and business wise. Today, though the wonders of Zagreb and Dubrovnik, Dalmatia and beyond still beckon, sagging economic conditions can spell disaster. The GDP of Croatia is the only one in the EU projected to sag. As private consumption and exports decline, Croatia and the Mediterranean island Cyprus are the only EU states whose GDP will shrink in 2014.

Finally, the message this sends to surrounding former Yugoslav nations is not good. If Croatia cannot make it in the EU, then most doubt the other states of Bosnia and Herzegovina, Kosovo, Macedonia, Montenegro, Serbia, and Slovenia may not fair even as well. Shipbuilding and industries that once propped up these economies during the era of Soviet influence, have all but dried up across this region.