Azerbaijan is one of the most progressive tourist destinations in the world since the outpouring of interest after Eurovision. As an indicator of just how quickly things are ramping up there, Azerbaijan’s Minister of Culture and Tourism, Abulfaz Garayev, just announced this morning the his agency’s need for tourism professionals.

One of the wealthiest countries in the world per capita, Azerbaijan’s oil riches are catapulting the small country on the Caspian into the forefront in nearly every business sector. Not the least of these being tourism, the country’s universities and vocational schools are initiating programs of study to fill a great need for professionals in tourism. But travel professionals are not all Azerbaijan will need to fill in the missing pieces of their tourism puzzle. PR, marketing, advertising, and especially hospitality industry expertise in the digital world are crucial. Let me illustrate.

Looking at Azerbaijan’s online footprint, anyone searching for the country might immediately notice a wonderful looking website (image below). At first glance the visitor will be nicely impressed, but on trying to switch languages anyone using Google Chrome or IE 8 will denote the English language variant button does not work. Whether or not this is a browser issue or the English version does not yet exist, it is very problematic for Azerbaijan tourism. In effect, the country is selling itself to itself. Let’s move on. 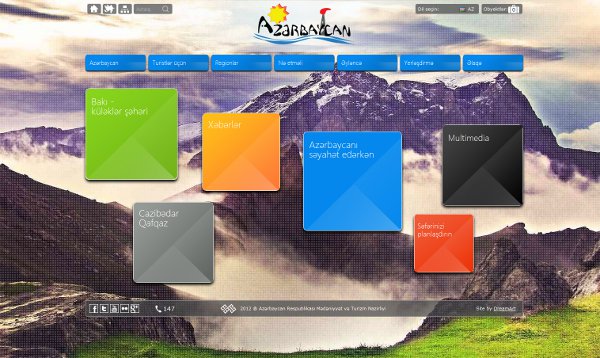 Social media plays a key role in the two way conversation about people, places, and things online. It can safely be said; “that is your business has not social engagement, it scarcely exist compared to your competition.” And if this statement is true at all, Azerbaijan is only slightly ahead of neighboring Georgia in the SM department. I should not that Georgia’s tourism portal here is in Russian and English. GoTurkey, the portal of Turkish travel West of Azerbailan, is another story altogether too. Their portal having been up for some time, and in several languages, speaks of that country’s attitude toward web visibility. However, a country capable of producing the video at article end, cannot exert excellence in social media or PR?

Even Turkey has what is often called an “upside down” Twitter aspect, meaning many more people “followed” than “following” the account. What this indicates is inexperience and/or inattention to engagement. Azerbaijan’s Twitter is listless and just broadcasting links. Moving to Facebook, Minister Abulfaz Garayev’s SM managers running the profile on the world’s most influential social network have no activity at all in September, and only broadcasting ministry stuff for previous months. Other network buttons are present, but g+ goes nowhere and Azerbaijan’s YouTube Channel got a new video some 7 months ago. (see below)

Abulfaz Garayev suggesting his ministry needs more tourism professionals may be the understatement of the new year where one of the world’s richest economies goes. It’s clear Azerbaijan needs PR, marketing, advertising, and especially digital branding help, to say nothing of a credible digital team. I do not mean to be overly critical, but given the monetary resources available to some governments and even businesses, mediocrity in promoting and capitalizing when most are sunken into economic chaos….

I leave the reader with the last video suggested, as well as the image above of their tourism’s face on Facebook. Imagine you listened to Eurovision, heard of the wonders of this fascinating country, then read this. A country this rich and proud with nothing to say about itself? Individuals with everyday jobs do better for their personal Facebook.