Successful foster care takes a team of people working together to create a safe space for a child to belong, a venture which takes a lot of work, patience and thought.

The International Foster Care Organisation Conference in Sofia, Bulgaria brings together everyone involved in the care of youngsters from the foster parents, social workers right through to the children themselves.

Children might be fostered for many reasons, and not just because they have been orphaned, abandoned or neglected as many people may imagine. Fostering is a complex solution and can offer a life saving respite. But whilst it addresses the immediate needs, it still leaves many questions about the child’s future still to answer.

The conference is designed to provide a platform for everyone involved in the fostering process to attend workshops, listen to presentations and talk to others in similar situations, to work towards creating the best possible outcomes for all concerned.

The conference
The official languages of the conference are English, Bulgarian and Russian and features speakers from all over the world including UK, USA, Ireland, Japan, Sweden, Bulgaria, Russia and the Czech Republic.

The full programme is yet to be confirmed but will include 90 minute and three hour plenaries and workshops. The speakers which have been announced are covering a wide range of subjects including talks based on children’s experiences and what can be learnt. As well as covering subjects that every foster family and child will face; there will be a range of more specialist discussions including autism, mental health challenges and disabled children.

However, one of the central themes is the fostering process and status in countries across the world and how learning and assistance can be shared to create a more enabling experience. One of the sessions will focus on practical fostering in Tajikistan whilst Professor Kevin Browne will be delivering the results of a 2 year study across the 27 EU countries on the subject of preventing abandonment. The Bulgarian Deputy Minister of Labour and Social Policy, Valentina Simeonova, will also be giving a speech on the progress of de-institutionalisation across Bulgaria.

The workshops are planned to provide the opportunity for lively and helpful debate, discussion and feedback between everyone involved with children who do not have parental care. The opportunity to network and develop useful contact arises rarely in the international fostering community, but the IFCO conference brings together professionals, carers and children to share the latest news, views and practices. 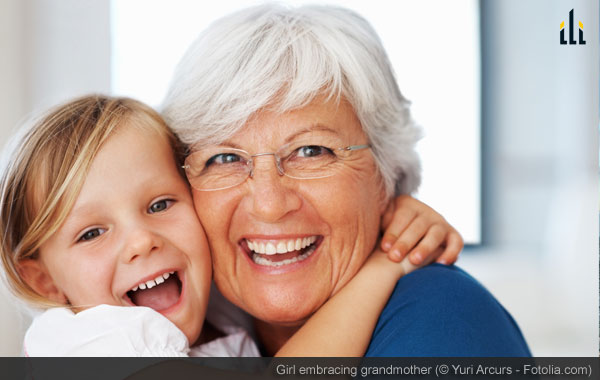 The venue
The conference is being held at the Princess Sofia Hotel, a venue which has previously won an award for Best Congress Hotel.

Lying just 200 metres away from the main bus and railway station, 2km from the centre of Sofia and only 10km from Sofia Airport, the hotel is conveniently located and easy to reach regardless of how you plan to travel.

The Princess Sofia can provide plenty of accommodation for those who wish to stay on-site, with 400 rooms in total, including 280 non-smoking rooms and 2 which are accessible via wheelchair. All rooms benefits from air conditioning and central heating, satellite TV and a complimentary high speed internet connection. Guests can also use the currency exchange facility, 24 hour room service, indoor pool or spa during their stay.

Both traditional Bulgarian as well as international food is available from the on-site restaurant.

The city
Important though the conference is, it would be a shame to visit without seeing more of the city itself.

Sofia has a history which dates back quite literally tens of centuries, with the oldest part of the town walls built before the 7th century. But despite being one of the most ancient cities in Europe, modern day Sofia is vibrant with a diverse and eclectic blend of cultures making it far from a stereotypical Eastern European experience.

The city is split into several provinces varying from modern hubs to Viennese and neo-Renaissance themed architectural parts. The city overall has a lot of green belt area and one of the regions, Vitosha nestles at the foot of a mountain of the same name.

Sofia is a very easy city to reach, and also travel around, with many different types of public transport. As well as eight railway stations, there are a number of bus stations, all of which not only serve long distance destinations, but also stop off at various points across the city. There is also a metro network, as well as trolleybus and tram lines in addition to the usual taxis and minicabs. 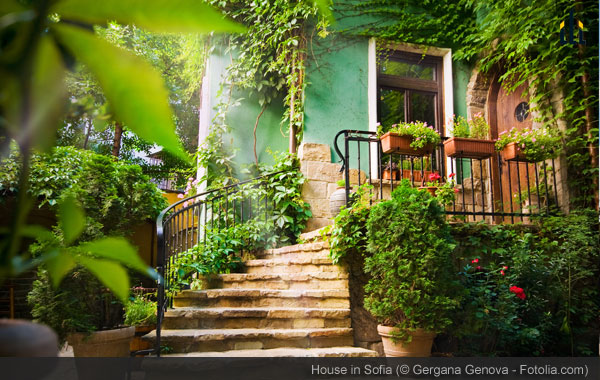 Sofia is beautiful by day or night with many hidden treasures.

Amazing architecture
The ease of travel around Sofia means it is almost inexcusable to visit such a cosmopolitan city and not enjoy some of the sights and sounds.

Fans of historical architecture will appreciate the stunning beauty of some of the buildings in and around the city, particularly those erected for religious worship.

The Sveti Sedmochislenitsi Church, which is also known by its slightly-easier-to-pronounce Western name of the Church of the Seven Saints, has a fascinating history. Originally built as a mosque, it fell into disrepair until Russians transformed it into an arms depot in 1878. It was later used briefly as a prison before being consecrated in 1903 and restored in what was later dubbed as Bulgarian National Romanticism style.

With a large central dome, a typically Byzantine iconostasis, and mural-covered walls with pictures of saints, the gilded church is a spectacular example of Bulgarian architecture.

Sveta Nedelya Cathedral is another major draw for tourists, with its stunning domed roof and its interior covered with holy murals. However, the showpiece is undoubtedly the glass case which holds the velvet-robed body of the famous Serbian king, Sveti Kral Stefan Milotin, whose bones are believed to have a sacred healing power, capable of performing miracles. 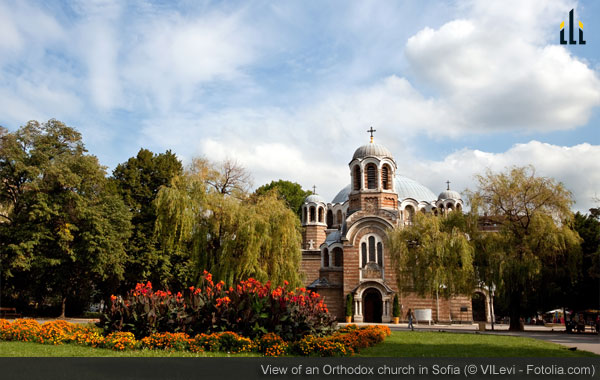 The Church of the Seven Saints with its unusual architectural style.

And so much more besides…!

But there is much more in Sofia than just beautiful buildings, luxury apartments and architecture.

History buffs will enjoy wandering around the city’s many museums, most notably the vast National Museum of National History. Three floors packed full of natural wonders of the past, from samples of delicate minerals and crystals on the ground floor right up to a brown bear with a Nazi hunting medal dangling from its claws.

Sofia City Garden offers an oasis of serenity and greenery, with flowing fountains, cafes and tumbling flowerbeds surrounding the benches and swings. Local pensioners use the park as a place to gather for chess games, a sight which simply adds to the appeal. The Doctor’s Garden is another outdoor space which provides visitors with a peaceful and pretty way to enjoy some fresh air. Conveniently situated just behind the National Library – another venue worth a look – the park is well-laid out with smart flowerbeds and paths, all centring around the large pyramid-shaped monument in the middle, a dedication to the casualties of the Russo-Turkish War in the 19th century. The Doctor’s Garden also features a Lapidarium, showcasing the Roman artefacts and relics which have been found buried in and around Sofia.

The city prides itself on the arts and culture programme it provides, evident in the galleries dotted all over Sofia.

However, the National Palace of Culture pays homage to all kinds of arts, crafts and talent, with more than 100 different exhibitions on display under one roof. As well as holding an enormous number of collections, changing throughout the year, there is also space for conferences, concerts and fairs. Some of the most famous names from the world of classical music have performed at the Palace including Andrea Bocelli, Jose Carreras and Nigel Kennedy.

The Palace lies within the landscaped Bulgaria Square, with its sparkling fountains, pavement cafes and entertainment for children providing a lively atmosphere.

Other similar places to visit include the Centre of Folk Arts and Craft where everything from hand-woven rugs to wood carvings are sold or the hidden treasure which is Traditzia, the store which only sells products from artisans described as ‘socially excluded’. Both contemporary and traditional Bulgarian goods can be bought, from glassware to textiles, the proceeds going towards helping communities become more self sufficient.

Finally, any youngsters attending the conference with their care givers may be interested in finding more hands-on activities. Sofia really does provide something for everyone as there is a zoo, Spartak – an outside pool with artificial beach and even an adventure park, Kokolandia.

The chance to fall in love
The IFCO conference provides a great reason to spend some time in the beautiful city of Sofia. As well as having the chance to meet others involved in the field of fostering from all around the world, visitors can linger around the city parks, gaze at the towering mountains and absorb the friendly and buzzing atmosphere which is Sofia. The 21st to 24th is a date to set in your diary but why not stay that little bit longer and gives yourself the chance to fall in love with a beautiful city unlike any other.