007 To Turn Travelers to UK Side [Video Coverage]

For another tourism boost after London 2012, the UK calls on none other than Bond, James Bond to “turn” foreigners for VisitBritain. To celebrate the 50th Anniversary of Ian Fleming’ s notorious character on film, an all out ad campaign is set to be launched.

This fall marks half a century of 007 across the proverbial silver screen, and all to appropriately Britain has never needed her hero more. The advertising campaign is said to follow the thematic “Bond is Great Britain,” and is all set to go live tomorrow across 21 countries including; Brazil, Australia Germany and the US of course. Social networks will tease with five online missions, which you can already get a leg up on here at Agent-UK. All you wanna be Bond’s out there can participate in helping to find the hidden rogue agent. (see video below)

A winner will be selected to be flow to the UK for a one of a kind experience (no telling what that means). As for other campaign teases, a second competition involves such perks as taking part in what the organizers term a Live like Bond experience. A private tour of the Aston Martin HQ (you get one for the weekend maybe), martini building lessons, and other incentives promise the UK should not have trouble recruiting more “OOs” as well as tourists to the British Isles. 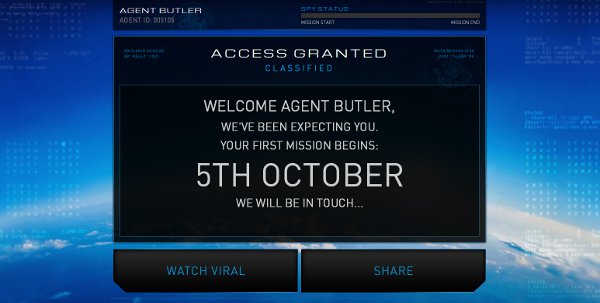 With the debut of the new Bond film Skyfall, set to be released October 26, this 23rd installment of the ever popular series promises thrills and spills, as well as many twists. Apparently M is put to the test in this flick as MI6 comes under full attack.  Can Daniel Craig (Bond) come through again? Well, research done by VisitBritain says the film’s locations may just do the trick for travel.

If anyone can send more peeps to the UK in Winter, it’s sure 007.